The National Science Board (NSB) of the National Science Foundation (NSF) has just released its Science & Engineering Indicators 2018, which it describes as, “Broad-based, objective information on the U.S. and international S&E enterprise” — S&E being short for science and engineering. The report shows that, for the first time, China is the world leader in the publication of scientific papers, besting the previous leader, the United States. While there are still lots of areas in which the U.S. leads China and the rest of the world, the new ranking reflects China’s increasing importance in the world of S&E. 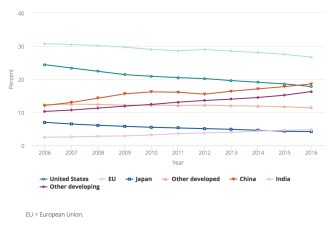 Only the E.U., a group of countries, publishes more than China alone. (NSB)

Different countries have different specialties, of course, and China’s is engineering studies. The U.S and E.U. produce more biomedical research, and American research results in a greater number of patents. U.S. and E.U. papers are also cited more frequently than research from China. The countries generating the most citations, however, are Sweden—for research in medicine, biochemistry, genetics, molecular biology, and engineering—and Switzerland, for biochemistry, medicine, physics, and astronomy.

Economist Robert J. Samuelson writes in The Washington Post, “The actual numbers are breathtaking for the speed with which they’ve occurred,” adding, “China has become—or is on the verge of becoming—a scientific and technical superpower. We should have expected nothing less.” 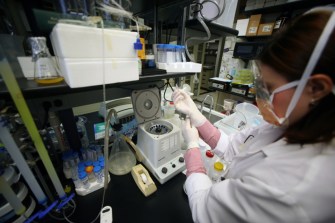 Samuelson’s referring to China’s large, and growing, investment in S&E research and development, which has risen by 18% every year since 2000, vs. the United States’ 4%. That’s 408 billion dollars poured by China’s leaders into R&D per annum. That nation has clearly made science a major priority, seeing it as a potent economic driver, at the same time as the current administration of the U.S. government is de-emphasizing scientific research. In two years, the NSB will be updating its report, at which time the shift in American’s priorities will be more fully reflected in the publication data, and may further exacerbate the current trend. 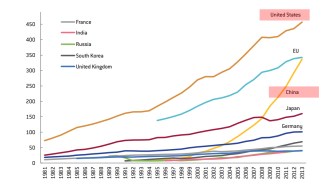 Samuelson sees growing Chinese S&E capabilities as potentially threatening to the U.S., writing, “One danger is military. If China makes a breakthrough in a crucial technology—satellites, missiles, cyberwarfare, artificial intelligence, electromagnetic weapons—the result could be a major shift in the strategic balance and, possibly, war.” Another concern he cites is China gaining dominance of high-tech areas on which the U.S. currently depends for jobs and lucrative exports, AI, telecommunications, and computers among them.

NSB chair Maria Zuber told Nature, “The U.S. continues to be the global leader in science and technology, but the world is changing. We can’t be asleep at the wheel.” During a public briefing on the NSB’s report, head of the NSF France Córdova warned, “We are involved in a global race for knowledge. We may be the innovation leader today, but other countries are rapidly gaining ground.”

Will new tariffs on Asian solar panels and washing machines benefit the U.S.?

New tariffs enacted on solar panels and washing machines are coming under fire from some around the globe, while others are calling the move a positive step for jobs in the United States.