The Department of Housing and Urban Development has accused Facebook of violating the Fair Housing Act, which prohibits discrimination in housing on the basis of race, color, religion, sex, national origin, familial status, and disability.

On August 13, the agency filed a complaint against Facebook alleging the company enables housing providers to restrict the types of people who receive advertisements for housing services.

The complaint lists six examples of how Facebook’s ad-targeting tools enable discrimination, including the ability to restrict advertising audiences based on zip code and interest in accessibility-related terms like ‘mobility scooter’: 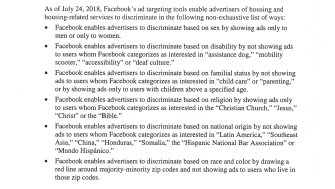 “The Fair Housing Act prohibits housing discrimination including those who might limit or deny housing options with a click of a mouse,” Anna María Farías, HUD’s assistant secretary for fair housing and equal opportunity said in a statement.

“When Facebook uses the vast amount of personal data it collects to help advertisers to discriminate, it’s the same as slamming the door in someone’s face.”

The Justice Department issued a statement of interest last week expressing support for the HUD complaint and a similar lawsuit filed in March by the National Fair Housing Alliance, which alleged that Facebook has long been violating the Fair Housing Act.

“Facebook has known for years that its advertising platform violates civil rights laws, but it has refused to change its ways on a voluntary basis,” Diane L. Houk, one of the attorneys representing the alliance, said in a statement. “Facebook is not above the law and must answer these civil rights claims in court.”

Facebook had tried unsuccessfully to have that lawsuit dismissed, arguing it was “without merit, and we will defend ourselves vigorously.” The company said it had been working to prevent housing providers from misusing its micro-targeting tools.

“There is no place for discrimination on Facebook; it’s strictly prohibited in our policies. Over the past year we’ve strengthened our systems to further protect against misuse. We’re aware of the statement of interest filed and will respond in court; and we’ll continue working directly with HUD to address their concerns.”

The accusations come during a particularly rocky year for Facebook.

In March, The New York Times and the U.K.’s Guardianand Observer revealed that the data firm Cambridge Analytica had been able to harvest the data of millions of Facebook users, sparking outcry from the public and lawmakers in multiple countries.

In July, Facebook lost about $120 billion in market value in the hours after reporting second-quarter earnings that fell short of analysts’ predictions.

Respected Oxford mathematician Roger Penrose sees swirls of radioactivity in a sky map as evidence that the Big Bang isn’t true. These “Hawking rings” suggest to him that the universe expands and collapses over and over.