Facebook says it has removed 138 pages, 75 accounts, and 65 Instagram accounts tied to the Internet Research Agency—a Russia-based “troll factory” with a history of spreading disinformation.

Alex Stamos, chief security officer at Facebook, announced the news on Tuesday in a blog post: “The IRA has repeatedly used complex networks of inauthentic accounts to deceive and manipulate people who use Facebook, including before, during and after the 2016 US presidential elections. It’s why we don’t want them on Facebook.”

According to the post, the 138 Facebook pages had more than 1 million followers, the 65 Instagram accounts had about 493,000 followers, and 95 percent of all suspended accounts and pages targeted Russian speakers. Facebook says its employees spent months identifying the pages and accounts tied to the IRA, which had reportedly spent $167,000 on ads across both of the social media platforms since 2015.

“We removed this latest set of Pages and accounts solely because they were controlled by the IRA—not based on the content,” Stamos wrote. “We know that the IRA—and other bad actors seeking to abuse Facebook—are always changing their tactics to hide from our security team. We expect we will find more, and if we do we will take them down too.” 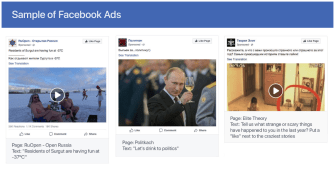 In October last year, Facebook reported that an estimated 10 million people in the U.S. had seen ads bought by accounts tied to Russia, nearly half of which appeared before the November 2016 presidential election. Facebook said most of the content focused on “divisive social and political messages.”

The Internet Research Agency appears to have been established in 2013 when it registered itself in Russia as a corporate entity. Later that year, a woman called Natalya Lvova posted an account of her experience working at the agency on social media. She got the job after responding to an ad offering work as an “internet operator,” and said that during her tenure she was instructed to write 100 online comments per day, with a focus on supporting or slandering particular Russian politicians.

In 2015, the IRA had become well known in the U.S. thanks to a NYTimes article titled ‘The Agency’. The piece outlined how the IRA used fake social media accounts, misleading articles, and outright hoaxes to confuse the public and destroy the reputations of anyone who posed a threat to pro-Kremlin causes.

“Russia’s information war might be thought of as the biggest trolling operation in history, and its target is nothing less than the utility of the Internet as a democratic space,” Chen wrote.

A joint report issued in January 2017 by the CIA, FBI, and NSA says that Russian president Vladimir Putin ordered the disinformation effort.

In February of this year, Special Prosecutor Robert Mueller issued an indictment of 13 Russian citizens linked to the IRA who are accused of having conducted “interference operations targeting the United States.”

The indictment outlines how, as early as 2014, the defendants used false personas or stolen identities from U.S. citizens to post “derogatory information about a number of candidates, and by early to mid-2016, Defendants’ operations included supporting the presidential campaign of then-candidate Donald J. Trump (“Trump Campaign”) and disparaging Hillary Clinton.”

One remarkable thing about the IRA is that, by many accounts, working at the agency seems to have been just another 9-to-5 job.

“That’s what makes this all so chilling,” Brian Barrett wrote in an article for Wired. “The people chiseling away at the foundations of US democracy weren’t zealots, or necessarily even true believers. They were collecting a paycheck, presumably doing just enough not to catch hell from middle management. America faced—and continues to face—not a fevered onslaught, but a swarm of interchangeable corporate drones.”

Facebook’s removal of IRA-linked accounts comes during the ongoing scandal over user privacy concerns and the social media platform’s past interactions with the data firm Cambridge Analytica.

Meaningful pictures are assembled from meaningless noise.
Up Next
Culture & Religion

Why does the conspiracy theory of Martin Luther King’s assassination persist?

“People need to see something of a balance between effect and cause… that if something has a huge evil effect, it should be the result of a huge evil cause.”