A federal judge ruled Tuesday that AT&T may purchase Time Warner, without any conditions, arguing that the $85 billion deal doesn’t violate antitrust law.

The six-week trial was a monumental win for corporate interests, likely clearing the way for other potential mergers like Disney and Fox, or T-Mobile and Sprint.

“A whole bunch of companies are all of a sudden going to get active,” Hal Vogel, CEO of Vogel Capital Management, told Fast Company. “The bankers have been romping around trying to figure out what they should do, if and when. Now that the decision is here, they’re going to move pretty quickly.”

AT&T argued that it needed Time Warner’s brands to survive in an increasingly competitive and consolidated media landscape.

“We look forward to closing the merger on or before June 20 so we can begin to give consumers video entertainment that is more affordable, mobile, and innovative,” AT&T General Counsel David McAtee said in a statement.

In November 2017, the Justice Department filed a lawsuit to stop the merger, saying it would bring less competition and higher prices. 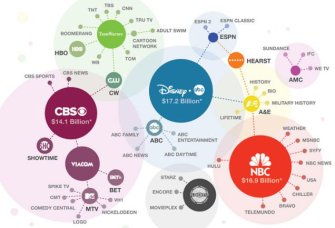 “The Government has failed to meet its burden of proof to show that the merger is likely to result in a substantial lessening of competition,” he wrote in his ruling. “If there ever were an antitrust case where the parties had a dramatically different assessment of the current state of the relevant market and a fundamentally different vision of its future development, this is the one.”

“We continue to believe that the pay-TV market will be less competitive and less innovative as a result of the proposed merger between AT&T and Time Warner,” he said in a statement.

The ruling is significant because it ostensibly sets a precedent on vertical mergers, defined as the combination of two companies that produce the same product but at different stages of the production process.

“It’s open season for vertical mergers,” Chris Sagers, an antitrust law professor at the Cleveland-Marshall College of Law, told CNN Money. “The fact is that they’ve gotten a little easier, and we’ll see a big flurry of deals.”

One way the deal could hurt consumers is if AT&T decided that only subscribers to its services can access Time Warner content, like HBO shows and DC films. That might help AT&T-Time Warner keep customers from cutting ties with cable and flocking to Netflix, which has been preparing for this moment for years by producing a cache of in-house content, but some argue it will give the conglomerate more power to raise prices on content without providing better service, and render smaller streaming services less competitive.

While the ruling has spurred media executives and analysts to look into other high-profile mergers, Judge Leon cautioned against considering it a decisive precedent.

“…the temptation by some to view this decision as being something more than a resolution of this specific case should be resisted by one and all!”

Here are the companies AT&T acquired in the merger:

The most dangerous things in your kitchen (Infographics)