American support for gun control is slowly increasing, though some are changing their minds faster than others.

The data on mass shootings in the U.S. suggest two broad trends for why support may be on the rise.

One is that mass shootings are becoming more frequent. According to the Harvard Injury Control Research Center, the average time between each mass shooting, defined as one that kills four or more people, is going down, with there being an average of 64 days between each incident since 2011, while, from 1983 to 2011, the average was 200 days.

Mass shootings also seem to be increasingly deadly. The death toll of shootings with multiple victims has risen since 2006, according to a database of shootings maintained by the magazine Mother Jones. What’s more, 2017 was the deadliest year on record in terms of active shooting victims, according to the FBI, whose data excluded gang- and family-related killings, and which defines active shooters as those who kill or attempt to kill people in a populated area.

Here’s another shocking statistic that came earlier this month from the Washington Post: 2018 has so far been a deadlier year for U.S. schoolchildren than it has for deployed service members, according to data released by the Department of Defense.

Are these apparently real (and definitely widely reported) trends causing Americans to reconsider their opinions on gun control? It seems reasonable to assume the answer is, broadly, yes: In February, the polling firm Quinnipiac reported that 66 percent of Americans supported stricter gun control measures, up from 52 percent in November 2015. Still, that poll was conducted in the wake of the Florida school shootings, and past studies have shown support for gun control tends to spike immediately after widely publicized incidents.

But there’s one factor that could be causing people to support gun control more or less overnight: living near the site of a mass shooting. The effect is detailed in a study by Benjamin Newman and Todd Hartman published in the British Journal of Political Science. 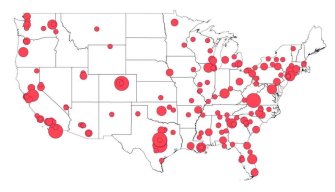 Locations of mass public shootings in the continental United States, 1966—2015. Newman and Hartman via The Washington Post

In the study, the researchers compiled all known mass shootings from the Stanford Geospatial Center’s “Mass Shootings in America” project, USA Today’s “Behind the Bloodshed” mass killing database, and Mother Jones’ “A Guide to Mass Shootings in America.” They then compared the shooting data with several public opinion surveys: the 2010 Cooperative Congressional Election Study (CCES), the 2010-2012 CCES Panel Study, and the 2010 Pew Political Independents Survey.

“Our analysis includes controls for relevant demographic factors (e.g., respondents’ race, sex, age and so on) and contextual variables (e.g., population density, number of firearm stores per capita, etc.) that might influence both the location of mass shooting events and respondents’ attitudes toward gun control policy,” they wrote in an article for the Washington Post.

The results showed that people who lived near mass shootings reported increased support for gun control—no matter their political affiliation.

“What’s especially interesting is that increased support doesn’t vary by party. Rather, support for regulation increases depending on how many mass shootings have happened near you; how many people were killed; and how recently they occurred,” they wrote. “Our research suggests a clear link between those who have lived near a mass shooting and a desire for stricter gun regulation.”

Why A.I. can’t solve everything

The hysteria about the future of artificial intelligence (AI) is everywhere. Here’s how to tone it down.