In a historic summit on Friday, the leaders of North and South Korea vowed to officially end the Korean War and work toward the “complete denuclearization of the Korean peninsula.” The meeting marks the first time a North Korean leader has crossed the heavily fortified Demilitarized Zone that separates the nations.

“The two leaders declare before our people of 80 million and the entire world there will be no more war on the Korean peninsula and a new age of peace has begun,” the declaration said.

Surrounded by officials and photographers, Kim and Moon participated in a tree-planting ceremony. The tree was a pine from 1953, the year the Korean War armistice was signed. Afterward, they walked alone, side by side, to a footbridge where they had a 30-minute conversation, about which no recordings or notes were released. 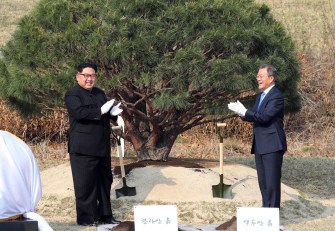 The mood of the meeting appeared to be uncharacteristically peaceful and jovial. Kim even offered up a joke about waking Moon up with early-morning missile tests.

“I will make sure not to interrupt your sleep any more,” Kim said.

But the pledges from the summit were short on concrete details. The Panmunjom Declaration failed to specify the extent of Pyongyang’s nuclear arsenal, or what Kim expects to receive in exchange for denuclearization–though the answer is likely economic growth.

“He is seeking the kind of rapid economic growth seen in China,” Lee Jong-seok, a former unification minister of South Korea, told the NYTimes. “The North Korea he envisions is different from his father’s North Korea.”

“We have looked only on the nuclear side of Kim Jong-un’s rule, trying hard not to look at the other side. He is ready to bargain away nuclear weapons for the sake of economic development. If he were content with just feeding his people three meals a day, he would not give up his nuclear weapons.”

It remains to be seen whether Pyongyang will follow through on its denuclearization pledge in light of North Korea’s history of breaking agreements with the U.S.

However, the meeting in Panmunjom sets a relatively optimistic tone for the upcoming summit between Kim and President Donald Trump, which is expected to happen in the upcoming months.

The masterminds behind Silicon Valley were doing more than coding.