The partisan divide is reaching a fever pitch in the United States and making some voters consider political alliances that would previously be inconceivable. A poll conducted by Yahoo Finance/SurveyMonkey found that nearly 40 percent of the Republicans asked would be fine with Russia interfering in the elections to help their party keep control of Congress.

Of the 2,509 Americans surveyed over July 25 – 27, 11 percent of people identifying or leaning Republican said it’s “appropriate” for Russia to interfere if it would aid Republicans in the upcoming elections. An additional 29 percent said it’s “not appropriate, but wouldn’t be a big deal” for the Russians to help out in that way. So a total of 40 percent of Republicans either approved of Russian interference or saw nothing terribly wrong with it. About 55 percent were completely against it.

Of course, in the hyper-partisan political atmosphere in the U.S., exacerbated constantly by Donald Trump himself, one can regard the results of this survey as bearing out unquestioning support for Trump by his base. He has consistently downplayed Russian involvement in the 2016 elections and is now contending that collusion, even if it happened, is not a crime. So it’s not wholly unexpected to see more Republicans reflecting such positions.

Emily Ekins, director of polling for the libertarian Cato Institute, which conducted an analysis of Trump voters thinks that while there’s a “shockingly high number” of Republicans supporting Russian interference, they just reflect their deep connection to the President.

“I think these results are driven by partisan loyalties,” said Ekins. “While it’s a shockingly high number of Republicans who say it’s not a big deal, what you’re seeing is, they’re defending the candidate they voted for – Donald Trump.”

On the Democratic side, a much smaller number — 14 percent would find Russian help appropriate or “not a big deal” if it benefitted the Dems. About 86 percent were totally against it and would find it a “major” problem. Interestingly, the prospect of the Russians helping Democrats next has been raised by Trump himself and commentators like Garrett M. Graff at Politico or Jonah Goldberg in the LA Times. 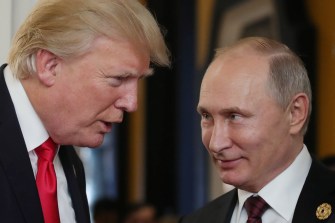 While loyalty to their side may be skewing what people are thinking, what do such statistics mean for the sense of civic pride in the country? For one, under federal election law, it is illegal for other governments and foreign nationals to make political contributions to candidates or offer anything of value to anyone linked to the U.S. elections. So just because of that, Russia’s interference should be a big deal.

In another sense, it is hard not to see an eroded understanding of the principle of self-determination in such polls. The right to self-determination is basically the right of a people to determine their own destiny without outside interference, choosing their own political status as well as the form of economic, cultural and social development, as explains UNPO. This organization helped a number of countries like Armenia, East Timor, Estonia and Georgia that have gained full independence and joined the U.N.

The right to self-determination is a key principle in modern international law, binding on the U.N. member states. Historically, the concept was supported by both Vladimir Lenin and the U.S. President Woodrow Wilson and has been consistently upheld by U.S. Presidents since. While there have been previous overtures of help from Moscow, including an offer to President John F. Kennedy, none have been accepted until the 2016 Trump Campaign.

By supporting the interference of another country in American affairs, such citizens are essentially giving up on their own right towards self-determination for the benefit of a fleeting partisan gain. Upholding their beliefs versus those of their fellow countrymen becomes more important than the welfare and sovereignty of the nation as a whole. It’s hard not to feel the dangers of this kind of slippery slope morality for the future of the United States.

Which Planet Appears The Largest From Earth?

Mars will never look as big as the full Moon. But it isn’t even the biggest planet.From humanity’s perspective, the Sun and Moon always dominate Earth’s skies.The Moon and Sun are […]