Human sacrifice is today, a part of urban legends or the serial murders of a few, craven madmen. But dig deeper into history and you’ll find that it was a part of many societies and took place in most regions around the world. These include the South Pacific, ancient Japan, early Southeast Asian societies, ancient Europe, certain Native American cultures, in Mesoamerica, and among the great civilizations of the ancient world. Babylon, Egypt, China, Greece, and even the precursor to the Romans, all took part in ritualized killings. In ancient Egypt and China, for instance, slaves were often buried alive, along with the body of their sovereign, to serve him in the afterlife.

Though condemned by the international community and wiped off the face of the Earth (as far as we know), the idea of human sacrifice still sends chills up the spine. Perhaps it’s because it runs counter to all we hold dear. Human rights are supposed to be edified, though in many places in the world, only lip service is paid. But even that small effort shows how the concept has solidified within the international psyche.

We’re told that in humanity’s ancient past, this macabre practice was performed to placate certain gods. But what if that was merely the justification fed to the masses? What if in actuality, it had a political purpose? A fascinating study published in the journal Nature, finds that ritual human sacrifice may have been a part of more sinister designs.

Here, scientists employed the “social control hypothesis,” to suggest that elites used ceremonial killings to consolidate power. By being the conduit to the divine, and elucidating what the gods wanted, emperors, priests, and others of high social stature, legitimized their power in the minds of the people, elevated themselves, and installed a silencing fear among those who would obstruct them. Psychologist Joseph Watts and his team found evidence supporting this hypothesis. He’s a doctoral student of cultural evolution at the University of Auckland in New Zealand. His team collaborated with colleagues from Victoria University, also in New Zealand. 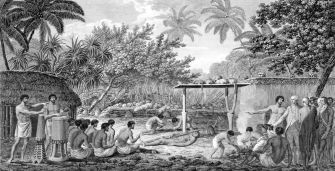 Researchers evaluated 93 Austronesian cultures, a seafaring people (and language family) originating in Taiwan, who came to populate parts of ancient Australia, Southeast Asia, and Polynesia. Over time, their societies differentiated dramatically. 40 distinct breakoffs were found to practice human sacrifice at some point in the distant past. Watts and colleagues wanted to know what, if any effect, ritualized killings had on the societal makeup, particularly in terms of social stratification and class structure. Researchers separated these societies into three groups: egalitarian, moderately stratified, and highly stratified. They evaluated each depending on with what ease social mobility took place and how rigid the social hierarchy was.

Watts and colleagues found anecdotal evidence that human sacrifice was a power grab, and a way to maintain social control. Researchers employed a technique called phylogenetic analysis in the study. This is usually used to follow the twists and turns of evolution in a species. Sociologists adopted the technique to study language development. Here, it was used to plot relationships among the different cultures being studied. This helped recognize whether certain traits in one culture were present in another, and determine what relationship human sacrifice might have on social stratification.

Data was derived from historical and ethnographic records. Though the methods differed and a variety of reasons were used to justify the heinous act, the results were always the same, the solidification of power. What’s more, victims tended to be the same, someone of low social status, such as a slave or prisoner of war. Phylogenetic analysis showed that human sacrifice started in egalitarian societies, but after it was introduced, these tended to become social hierarchies. Once in place, ritualized killings helped leaders assume greater control. 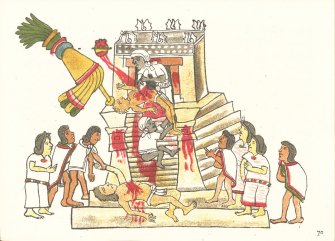 Two-thirds of highly stratified societies once took part in the grisly act, while only a quarter of egalitarian cultures did. The groups who at one time practiced human sacrifice, had more rigid castes, titles that were inherited, and less social mobility. Researchers concluded that “ritual killings helped humans transition from the small egalitarian groups of our ancestors and the large, stratified societies we live in today.” Though sociologists have posited such a hypothesis before, this is the first time it’s been scientifically studied.

Among many today, religion is thought to be the standard bearer of morality. Yet, this study, as Watts said, “…shows how religion can be exploited by social elites to their own benefit.” Since these societies prospered, it proved an effective method of social control. “The terror and spectacle [of the act] was maximized,” in order to achieve the desired effect, Watts told Science. Moreover, ritualized killings would’ve given pause to rivals considering a power play for the throne, foreign ministers mulling over war, and bands among the populace grumbling for rebellion.

Yet, Watts and colleagues posit that social cohesion and stratification was necessary to give humans the ability to develop large-scale agriculture, build cities, erect monumental architecture and public works projects, and to allow for greater capacities for science, art, and learning. Though these findings are thought provoking and significant, some experts wonder if the phylogenetic analysis proves a causal relationship, or merely hints at one. Also, ritual sacrifice is probably not the only reason societies grew hierarchical and complex. Similar hierarchies to those erected in the ancient days, are still present in many of these societies, Watts said, though modern religions have done away with the practice which helped to established them.

To learn the details of one of the most famous cases, an Aztec human sacrifice, click here:

The science fiction dream of a traversable wormhole is no closer to reality, despite a quantum computer’s suggestive simulation.
Up Next
Starts With A Bang

There’s no such thing as a ‘habitable Super-Earth’

Earth is pretty much the limit of how large you can get and still be rocky. Anything much larger, and you’re a gas giant.“How vast those Orbs must be, and how […]