In Hollywood movies diplomats always get a bad rap. I’m picturing Claude Rains as “Mr. Dryden” in Lawrence of Arabia looking, as Clyde Rains always does, somewhat reptilian as he hunches over a map of the Middle East with General Allenby, smirking secretively. Hollywood diplomats are slippery. Untrustworthy. More often than not, they turn out to be double agents. On screen, definitive action plays better than careful talk or compromise. This is true of America in general and of our politics in particular—we’re just not comfortable with ambiguity. Leave that to the French. Americans are about gettin’ things done.

But the geopolitical world is complex, and allegedly getting more so every day. Meanwhile, over the last several presidencies, America has quietly been shifting its foreign policy approach from diplomacy to military muscle. With the current president, the gutting of the State Department in favor of the Pentagon is starting to look like Friday the 13th part whatever. My guest today is investigative journalist and former State Department official Ronan Farrow. He won the Pulitzer Prize for his his work in the New Yorker on the Harvey Weinstein sexual abuse scandal. His new book is War on Peace, The End of Diplomacy and The Decline of American Influence — and the title is pretty much self-explanatory. 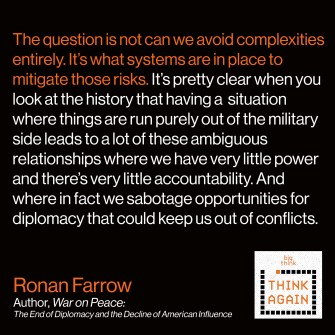 Afraid you’ll be revealed as an impostor? You’re not alone.

Most people experience impostorism at least once. Certain groups however are more prone to it than others.