The results of a recent survey show how scientists working for the federal government feel the Trump administration is affecting their work.

Since 2005, the Union of Concerned Scientists (UCS) has been conducted a total of nine surveys of federal scientists. This year’s survey, conducted by the UCS and the Center for Survey Statistics and Methodology at Iowa State University, was issued to more than 63,000 scientific experts at 16 federal agencies in February and March 2018.

“In many of the critical science agencies—especially the agencies that handle environmental regulation—scientists reported that they are having trouble doing their jobs because of political interference, staff reductions and a lack of qualified leadership,” said Jacob Carter, a research scientist with the Center for Science and Democracy at UCS and a co-author of a report based on the survey.

The UCS, a nonprofit science advocacy organization in Cambridge, Massachusetts, wrote that the Trump administration’s “record on science policy is abysmal.” Some survey results seem to bolster that claim.

Half of scientists across all of the agencies in the survey either agreed or strongly agreed that “the level of consideration of political interests hindered the ability of their agencies to make science-based decisions.” Also, about one-third of the scientists surveyed agreed or strongly agreed that “the presence of senior decision-makers who come from regulated industries or who have a financial interest in regulatory outcomes inappropriately influenced their agencies’ decision-making.” 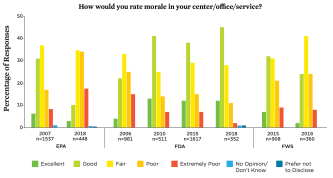 Scientists with the Environmental Protection Agency seemed to report the highest dissatisfaction in the survey, with morale at an all-time low compared to survey results over the past decade, and with 81 percent of scientists agreeing or strongly agreeing that political influence was a problem.

The results weren’t all negative. Scientists with the Food and Drug Administration (FDA) and the National Oceanic and Atmospheric Administration (NOAA) reported significantly less political pressure, seemingly because “political leadership has been less likely to interfere with or sideline scientists’ work” at these agencies.

“The good news is that science isn’t being compromised throughout the entire administration,” said Carter. “Agencies such as the FDA and CDC stand out compared to other agencies we surveyed because scientists there said that their leadership respects their work and includes them in the policymaking process.”

Still, the authors were clear in noting the potential consequences of political influence in agencies that are feeling pressured.

“When federal scientists can’t carry out their work, it’s the public that suffers,” said Charise Johnson, a UCS research analyst who worked on the survey. “When you can’t research threats and share accurate information with the public, there are real consequences. People depend on federal science to protect them from pollution, chemical exposure and natural disasters. This work really matters.”

The UCS issued some recommendations for agency leaders:

From politics to culture, we blame “tribalism” for humanity’s problems. This explanation is entirely wrong.
Up Next
Think Again Podcasts

Congo is one of the most culturally diverse, mineral rich, and beautiful places on Earth. But the “heart of darkness” colonizers dreamed into being still bleeds. Daniel McCabe’s documentary This is Congo lets this wounded nation speak for itself.