President Donald Trump signed an executive order on Wednesday that calls for officials to stop separating immigrant families at the U.S.-Mexico border.

“We’re going to keep families together but we still have to maintain toughness or our country will be overrun by people, by crime, by all of the things that we don’t stand for and that we don’t want,” Trump said.

“I didn’t like the sight or the feeling of families being separated. I think anybody with a heart would feel strongly about it. We don’t like to see families separated.”

“We are keeping a very powerful border and it continues to be a zero tolerance. We have zero tolerance for people that enter our country illegally.”

It’s a stark reversal by the Trump administration, which has repeatedly and incorrectly insisted its hands were tied and “Congress alone” could change the policy. 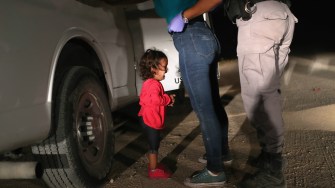 A two-year-old Honduran asylum seeker cries as her mother is searched and detained near the U.S.-Mexico border. (Photo by John Moore/Getty Images)

“Congress and the courts created this problem, and Congress alone can fix it,” Homeland Security Secretary Kirstjen Nielsen said Monday at a White House press briefing. “Until then, we will enforce every law we have on the books to defend the sovereignty and security of the United States.”

She was wrong on all points.

It’s true that there was no codified law ordering the separation of immigrant children from their families, but the separations were an inevitable consequence of the administration’s zero-tolerance policy, issued by the Department of Justice, that called for the criminal prosecution of all border-crossing immigrants. Adult immigrants who were prosecuted were sent to federal jail where they couldn’t bring children with them. In the past, families stayed together because they were held in immigrant detention.

Also, as Wednesday’s order proves, the president did have power to direct officials to stop family separations. Even Senate Republicans, who reportedly met with the president prior to his announcement, had voiced this fact. Senator Lindsey Graham, for instance, told CNN that Trump could fix this whole problem “with a phone call.”

The news comes as a surprise to many, even among insiders. According to a comment given to Politicoby a former Department of Homeland Security official, not even the U.S. Immigration and Customs Enforcement legal team was informed about the decision.

“It sounds like they blindsided everybody,” the person said. “What changed in the last 12, 24 hours? … Either you believe that, operationally, this is what you need to be doing, or you don’t.”

The most obvious reason for the reversal is the massive public backlash against the policy. As images of crying children being separated from their families go viral, and as a Facebook fundraiser to help immigrant families obtain aid and legal services has raised more than $5 million over several days, it’s not hard to see how this has been a political nightmare for the administration and the GOP, especially with midterm elections approaching.

The order also marks a rare instance of surrender by the administration, as Aaron Blake wrote for the Washington Post.

“Rarely has the White House so tacitly and unmistakably admitted to overplaying its hand,” Blake wrote. “And rarely has it so blatantly copped to its own dishonesty about its actions. Nielsen, in particular, has a lot of explaining to do. But this whole thing is an extremely ugly chapter. And it makes clear that, from Day One, this was a political gambit to force an immigration bill through. It didn’t work.”

Study of 20,000 finds an income advantage for those judged to be very unattractive

A longitudinal study of 20,000 young Americans found a strong correlation between extreme unattractiveness and higher pay.