How does the size and impressiveness of the engagement ring relate to how attractive you consider your partner to be? This was the question posed by Jaime Cloud and Madalyn Taylor of Western Oregon University in their latest study. It turned out that a man was more likely to buy an expensive ring for a more attractive woman, while a woman was more likely to choose an expensive ring if her partner was a less attractive man.

“Few material goods entail as high a cost and carry as little practical value as an engagement ring,” wrote the scientists. As such, engagement rings are fruitful to study. The experiment showed that a person’s looks influence how they make such a grand purchase.

To conduct the study, the researchers provided 590 American participants (30 years old on average) with a photo and a little bit of information about a person of the opposite sex. The subjects were asked to imagine if they were a boyfriend or girlfriend of this person, who was rated to be attractive or unattractive.

Women had to select the smallest rings they could settle for if given by the presented men. A male participant had to choose how big of a ring he would get for the girlfriend he had to imagine.

Here’s an experimental photo and profile shown to the participants in the study: 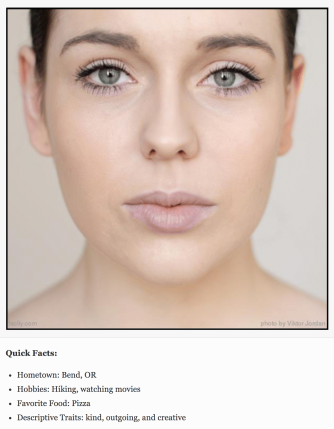 The results indicate that men would get bigger, costlier rocks if they were to be paired with an attractive woman. This finding also supports previous studies that showed men using symbols of financial achievement to attract mates, explains the press release for the study.

In their turn, women would want larger rings if their partners weren’t so good-looking. Interestingly, women who thought themselves physically attractive were more likely to expect and get more expensive rings, no matter what their partners’ looks.

“The finding is consistent with the notion that desirable women expect greater resource investment from their mates,” pointed out Taylor.

Something to consider before you attempt to “put a ring on it”.

Check out the study in Springer’s journal Evolutionary Psychological Science.

A medical entomologist points to metabolism, body odor, and mindset.
Up Next
Surprising Science

Could gravitational waves reveal how fast our universe is expanding?