The impulse to make art is with us from childhood. It’s the desire to play. To say “hey! Look what I made!” It’s the wild fun of making a big mess that’s nobody else’s but your own—and not having to clean it up. Above all else, art is wild. It’s independent. It’s free. And that’s one reason why the art industry is a very weird thing. In order to make money “at scale” as the Silicon Valley kids like to say, movie studios, fancy galleries, and concert promoters have to quantify, systematize, and package that sense of freedom. If it sounds like a paradox, that’s because it is. I’m just gonna say it: the more money at stake, the less breathing space for everything that draws us to art in the first place.

I’m here today with an actor whose name is basically synonymous with creative freedom. Parker Posey has created unforgettable characters in indie films like Richard Linklater’s Dazed and Confused, Hal Hartley’s Fay Grim, and Christopher Guest’s Best in Show, and in big studio productions like You’ve Got Mail and Netflix’s Lost in Space. Wherever she shows up, Parker fills the screen with an energy teetering between hilarious and deeply uncomfortable. A sense of chaos barely contained. Her new memoir – her first book – captures that same wonderfully unpredictable honesty and humor. It’s called You’re On An Airplane: A Self-Mythologizing Memoir. 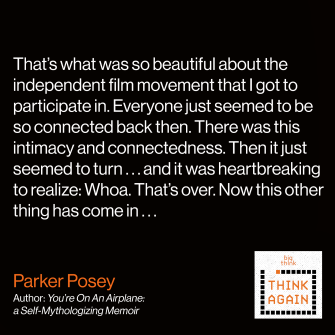 Danny Sjursen on how Americans value the lives of non-Americans

Nick Offerman on staying balanced in an insane industry

Why do secular groups often act like religious ones?

Why do secular groups often act like churches? The answer is simpler than you think.