Richard Hofstadter is in vogue. Since Donald Trump’s ascension the term ‘anti-intellectualism’ has been used endlessly, in part thanks to the President’s announcement that, “I love the poorly educated.”

Hofstadter’s work is more nuanced, of course. He recognized intellectual appreciation is cyclical, dependent upon cultural forces. Obama has been derided as professorial, a quality many other Americans appreciate; journalist Ta-Nehisi Coates recently expressed awe over just how intelligent a mind he has. With Trump we’ve entered a new (or old) phase of the cycle.

This can be witnessed in his cabinet appointments. A secretary of state with questionable economic ties to oppressive regimes; a secretary of energy who wants to abolish that agency (if he could only remember its name); a labor secretary who disdains higher minimum wages but loves carnivorous women in bikinis; a climate change skeptic running the EPA.

One of the lesser-discussed but potentially most disastrous confirmations is in education. Betsy DeVos criticized Trump and even raised funds for other GOP candidates, but she fits perfectly into the ‘poorly educated’ narrative. Like other picks she wants to shrink the agency she’s being put in charge of by handing over power to state and local agencies while promoting school vouchers.

The voucher program supports free-market competition, a running theme in the coming administration. For example, Jim O’Neill, a potential pick to run the FDA, has stated that the government needs less oversight and fewer clinical trials; he claims the market will figure it out. DeVos toes a similar line in education. She plans on breaking up the “government-run monopoly” public school system in favor of private, charter, and—we can argue, especially—religious school training.

DeVos and her husband, Dick, are billionaires with a strong belief in Christianity—she once stated that school choice will “advance God’s kingdom.” They’ve argued public schools have “displaced” the church in American life. As an activist DeVos has made it her mission to undermine the system through vouchers, shepherding young minds into schools that aren’t subject to that inconvenient First Amendment. 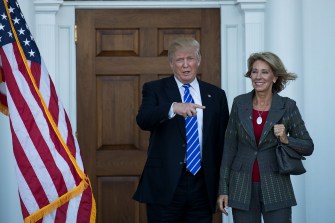 In Anti-Intellectualism in American Life, Hofstadter reminds readers that religion is not inherently opposed to education. In fact intellectual life flourished due to Protestantism in the 18th and 19th centuries—the same church DeVos was brought up in. But oh, how religions change. What happened was not purely American, Hofstadter argues, but a natural consequence of intellectual development in religious communities. A fracture between “mind and heart” started the slow dissolution of intellectual pursuits.

As the country grew and tribes splintered the race for a pure Christianity commenced. As enthusiasm for boisterous new movements evolved the “learned professional clergy suffered a loss of position.” Rational religion, Hofstadter argues, declined as citizens relied more on their reptilian paralimbic survival mechanism: my way or no way.

Let’s consider Hofstadter’s sentiment in light of a more current understanding of neuroscience. No matter how logical a thinker one might be, our brains are designed to respond to our environment quickly and accordingly, meaning emotional reactions always occur first. There are techniques (such as meditation) that strengthen the resolve between the paralimbic system and the prefrontal cortex, the reasoning portion of the brain. This means you’re able to feel an emotional response but not immediately lash out in fear, disdain, or hatred. You’re able to see many sides of an argument without always defaulting to your own.

The problem is this process requires an education to understand. By appealing to and championing emotions over all else—by espousing a specific religious ideology, for example—people like DeVos short-circuit the slow and arduous process of critical thought necessary to differentiate between imagination and reality. They believe their way is the way. Once that happens silencing your opposition is easy. You have made yourself believe you have a divine mandate, which trumps all earthly rationality. Education becomes secondary to allegiance to that belief. And if education contradicts or stifles that belief, it must be eradicated at all costs.

That’s a dangerous mindset in an ailing public school system. American education is the most expensive in the world, yet recent results are lackluster; we currently rank fourteenth in the world. Since 90 percent of private schools are associated with a religious group, DeVos’s ‘choice’ is really not one at all. She’ll be attempting to indoctrinate broad swaths of children into a system that teaches a particular way of viewing the world, one that is more emotional, less rational, and in accordance to what she believes.

We call cities bubbles, but so are nations. America is the only developed country besides Australia with elected officials who deny climate change. Some of those same figures give credence to creationism. It’s hard to take seriously men and women spouting such ridiculous ideas, yet their prominent positions of power afford them the ability to legislate. That’s only going to get worse with the coming administration.

DeVos is right on one thing: public schools are in trouble. Not only do we need to focus more on science and math, especially as the latter discipline pertains to critical thinking in statistics (so we’ll stop believing biased polls and research, as well as fake news), we need a stronger appreciation of and education in the arts, fitness, nutrition, and sexuality. Growing legions of under-cultured brains do not make for a sound cultural mind. While it’s wonderful that six-year-olds can develop apps, learning how to treat your partner and respecting other cultures is equally if not more important in the larger scope of life.

Overlooking Betsy DeVos is dangerous. She has an agenda, one that will accomplish the worst fate of all: turning the clock back centuries on young minds through magical and biased thinking.

Why virtue signaling isn’t the same as virtue

Why, exactly, don’t you trust that person’s opinion?
13.8

Why is it so hard to understand what a theory is?

Even the dictionary doesn’t get the definition right.
Up Next
Politics & Current Affairs

Can a Nuclear War Really Be Launched in Haste? And By Who?

Journalist Eric Schlosser reports that the president isn’t actually the only American who can launch a nuclear attack all by himself or with one other person.