The town of Büsingen am Hochrhein is one of two foreign enclaves enclosed within the territory of Switzerland (*). Büsingen has a long, intimate knowledge of borders, being located on the old limes between the Roman empire and the Germanic barbarians.

Ever since the mid 14th century, Büsingen has had Austrian overlords – at the end of the 17th century, the abduction, trial and death sentence of the Lord of Büsingen at the hands of the neighbouring Swiss canton of Schaffhausen almost led to war between Austria and Switzerland.

It’s said that due to this near-war, the Austrians decided to never relinquish control over Büsingen to the Swiss, just to spite them. When Austria sold its rights to the nearby villages of Ramsen and Dörflingen to the canton of Zürich in 1770, Büsingen effectively became an enclave within Switzerland.

In 1805, the Peace of Pressburg handed Büsingen to the kingdom of Württemberg, in southern Germany. Five years later, the town came under the overlordship of the Grand Duchy of Baden. Eventually, with German Unification in 1870, Büsingen became part of the German Empire.

A whopping 96% of the inhabitants voted for annexation by Switzerland in a 1919 referendum, but since the Swiss couldn’t offer Germany any territory in return, Büsingen remained, somewhat reluctantly, German. 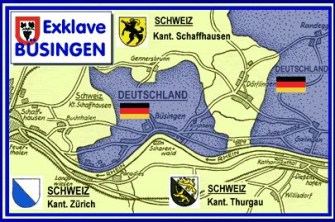 As Büsingen is in a customs union with Switzerland, it is outside the European Customs Area. Other peculiarities caused by its exterritoriality: • the common currency in Büsingen is not the euro, but the Swiss franc. • Swiss police may pursue and arrest suspects in Büsingen, but no more than 10 Swiss police officers are allowed in the town at one time. • Similarly, there may never be more than 3 German police officers per 100 inhabitants. • There are two postal codes in this one town, a German one: 78266 Büsingen; and a Swiss one: 8238 Büsingen (D). You can use Swiss or German stamps for your letters. • Büsingen’s only petrol station advertises that it’s the cheapest in all of Germany – on average 30% cheaper.

Related
The Future
Custom Image Test
Lorem ipsum etc etc etc etc
Life
Visualization test
Lorem ipsum dolor sit amet, consectetur adipiscing elit. Nullam id tincidunt mi. Morbi malesuada nulla sit amet est hendrerit tincidunt. Etiam viverra, nisl id volutpat eleifend, est augue sodales orci, […]
L&D Strategy
Transfer of learning: The necessary step to make learning stick
Transfer of learning is a concept that should be top-of-mind when planning any learning and development program. Why? In a perfect world, the billions of dollars organizations collectively spend every […]
Starts With A Bang
Why we’ll never see back to the beginning of the Universe
We thought the Big Bang started it all. Then we realized that something else came before, and it erased everything that existed prior.
Thinking
Is there an afterlife? See how your answer compares to polled Americans
There is more consensus on what heaven looks like than hell.
Up Next
Strange Maps
South of No North: Country Music’s Favourite States
Texas and Tennessee are the two states most mentioned in country lyrics