What a strange concoction this late-18th-century French map is. Centred on the northwestern part of America, it is an eclectic mix of geographic fact and fiction. Some continental contours are instantly recognisable, for instance the Kamchatka peninsula of Russia’s Far East, and Canada’s Baffin and Hudson Bays. But what is that thing in between, and what has it done to Alaska?

Even the mapmaker must have known there was something wrong with what he wrought. Notice the contrast between the mostly soft-edged shores of this half-baked Alaska [1], and the jagged coastlines of the real parts of the world. The lack of detail for the former is intentional, a sign of deference by the cartographer to his lack of knowledge. Smooth shorelines are a code between the maker and reader of maps, to be read as: Not yet surveyed.

Then take a look at the larger shape of this alternate Alaska, to the islands populating its northern shores, and to that strange strait that connects Pacific to Atlantic, while skirting both aforementioned Canadian Bays. They’re proof of a curious constant in mapping fake geographies: even though imaginary islands, rivers and coastlines are as random as real ones, they mostly look like the fantasies they are. There’s just something inimitable about the haphazard quality of truly natural geography. 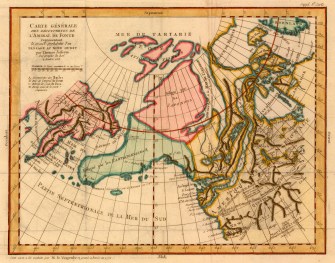 This map appeared in the third volume of Diderot’s Encyclopédie as Didier Robert de Vaugondy’s version, dated 1772, of an English map by Thomas Jefferys (1768). It purports to be a General Map of the Discoveries of Admiral de Fonte, representing the great probability of a North-West Passage.

This was a popular map, as the Northwest Passage was a popular fantasy – and a prime example of wishful mapping. The Passage found its origins in the early days after discovery, when America was still seen by Europeans as an obstacle to trade with China and Japan, rather than as an opportunity in its own right. Its existence was first mooted in 1539 by Francisco de Ulloa, whose voyage up the Gulf of California [2] led him to propose that it was one end of a strait that ran all the way across the North American continent to the St. Lawrence River, flowing from the Great Lakes through Québec into the Atlantic.

This waterway, all the more mythical for being non-existent, started showing up on maps from the mid-16th century onward as the Strait of Anian, probably after a Chinese province mentioned in Marco Polo’s Travels [3]. For centuries, it was one of that handful of fictional drivers of real exploration. Others include the Seven Cities of Gold (in North America) and El Dorado (generally sought in South America). These places were always sought after but never found, and thus instrumental in pushing back the boundaries of the unknown.

The Strait of Anian (or, as the British preferred to call it, the Northwest Passage), was the elusive prize of Sir Francis Drake’s visit to the North America’s West Coast [4] in 1579. In 1592, the Greek-born, Spanish-employed Juan de Fuca [5] claimed to have found it. In reality, he probably sailed up the strait between Vancouver Island and the Olympic Peninsula that would later be named in his honour.

In 1609, Henry Hudson ventured up the river that would be named after him, in search of the eastern terminus of the Northwest Passage. He died a few years later, set adrift up north with his son and a few others by his mutineering crew into the icy bay that would later also bear his name.

An apocryphal Spanish tale has the Spanish admiral Bartolomeo de Fonte actually sail through the waterway in 1640, meeting a trading ship out of Boston that came in from the other side.

In the 1770s, Captain Cook sailed up and down the coast of the Pacific Northwest, searching in vain for the entrance to the Strait of Anian. His was the last, most vigorous attempt to do so.

The numerous, ever more northerly, and often deadly attempts to effect a Northwestern Passage were finally crowned with success in the early 20th century. It took Roald Amundsen three years (1903-1906) to make the crossing.

Too much ice and too shallow waters have always rendered this Northwest Passage uneconomical, but global warming might be changing that. When the ice retreats far enough, the mythical waterway may yet become a reality, and finally connect the markets of the Old World with the fabled riches of Cathay and Xipangu [6].

This map found here at the Princeton University Library.

[1] And of the wholly fictional islands to its north, floating in the Mer de Tartarie and inhabited by the mysterious Ye-Oue, or Nation des Pygmies. In the Middle Ages, ‘Tartary’described all lands east of the Urals, little known in the West. Most of it corresponds to what we now consider to be Siberia (i.e. the Asian part of Russia).

[2] The narrow body of water separating Baja California from the rest of Mexico. This peculiarity also prolonged the belief that California was, in fact, an island. See also #71.

[3] Where Anian and Toloman were mentioned together in such a way as to suggest that the former was Japan, the latter Kamchatka.

[5] That’s Ioannis Phokas to his dear old mum and dad, but also sometimes Apostolos Valerianos. It’s not exactly clear to whom.

[6] China and Japan, if you were Marco Polo.

Can Conservatives Elect a Non-Romney?

The conservative conundrum regarding the Romney candidacy is the result of our plurality voting system that isn’t flexible enough to accurately measure voter preferences. While this system is adequate for a head-to-head race, it is deeply problematic when there are multiple candidates.