Fernweh [1] is what the Germans call that longing for faraway places, the poetic certainty that things are better and/or more interesting elsewhere. But there is a superlative degree of geographic desire, a Fernweh even more sublime: the ache for fictional faraway places. Of such nonexistent locations, the mythical continent of Magellanica surely is the crowning glory. By rights of pedigree and size, it should be the most prominent of of phantom lands. Yet Magellanica is as absent from the imagination as it is from contemporary maps – those prosaic projections of mere topographic fact.

Magellanica has had many names and shapes, and regularly occupied large swathes of the southern hemisphere on world maps from the 15th to the 18th century. The most fantastic climates, cities and costumes were attributed to her. But most cartographers shied away from focusing on this hypothetical, as yet to be discovered continent. Conventionally, it is shown as an upside-down curtain, arbitrarily undulating upward from the South Pole, which in the projection popularised by Mercator is smeared out along the entire bottom of the map. However, this map, from Petrus Bertius’ [2] Tabularum Geographicarum Contractarum (1616) audaciously places the entirely imaginary continent at the centre of the map. 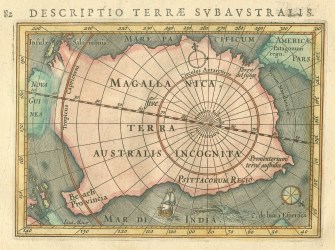 The continent is labelled Magallanica, sive Terra Australis Incognita: ‘Magellan’s Land, a.k.a. the Unknown Southern Land’. The name of the Portuguese explorer [3] was attached to the hypothetical continent because he supposedly skirted it in 1519, but the putative existence of a large mass of land in the southern hemisphere had already been posited by Aristotle (4th century BC) and elaborated by Ptolemy (1st century AD).

You read those dates right: the idea that the Earth was a sphere was much more common in Antiquity (and even throughout the Middle Ages) than one might think. But the idea that the ‘Arctic’ continents on the northern hemisphere needed an ‘Ant(i)arctic’ counterweight on the planet’s southern half was based on a false analogy, and the bitter disputes about whether those places were habitable [4], or their inhabitants doomed [5], sound completely nuts these days.

As the Age of Discovery rolled back the outer limits of the unknown, world maps started showing the Terra Australis Incognita in various shapes – initially quite far north, into the habitable zone. Discoveries of land near the Southland’s potential extension, were seen as proof of the its existence. Tierra del Fuego, Java, New Guinea and the northern coasts of Australia were at some point all included in the shoreline of Magellanica. Other expeditions, like Dias’ rounding of the Cape of Good Hope in 1488, kept pushing the imagined continent further south.

This map is late enough to catch some of these improvements, before Schuiten and Le Maire’s 1616 expedition around Cape Horn would shrink Magellanica further, Tasman’s 1642 voyage south of Australia detached its northernmost extension, and Cook’s second voyage in the 1770s relegated what was left of it to the uninhabitably cold polar region. The Bertius map links a few separate discoveries to the single landmass that isn’t Magallanica. On the map, the regions mentioned are:

Over the centuries, and while it shrank, Magallanica was known by a number of different names: Terra Australis Incognita (or Ignota), Bresil Inferior,la Australia del Espiritu Santo, Mowalanijia (on Jesuit-produced Chinese maps), Jave laGrande,  etc.

Eventually, in much-reduced state, and divorced from its original ‘function’ as balance for the northern continents, it would be discovered and named as Antarctica.

This map was found here on the website of Princeton University Library. It has an eerie similarity – also qua mistakes – with Mercator’s map of the North Pole (see #116)

[2] Latinised name of the Flemish cartographer Pieter de Bert (1565-1629), brother-in-law to fellow mapmakers Hondius and Van den Keere. Building upon his personal involvement with Arminianism, he published a theological tractate that went down badly with the mainstream of Dutch Protestantism; Bertius lost friends, influence and jobs, and left for France. He converted to Catholicism, which allowed him to work as a geographer, mathematician and historian at the royal court and universities of Paris.

[3] Ferdinand Magellan – in his native Portuguese Fernão de Magalhães (1480-1521), led the first, Spanish-sponsored circumnavigation of the globe, although he was killed before his crew completed it. Magellan named the Pacific Ocean, discovering it after sailing through the narrows that still bear his own name. This Strait of Magellan separates the mainland of South America from Tierra del Fuego.

[4] People had a very hard time imagining what people who lived ‘upside down’ would look like: with feet where their heads should be, and vice versa? And why didn’t they simply fall off the planet?

[5] Some geographers in Antiquity thought that the Earth had two habitable zones, in the north and south, separated by an impassably hot zone around the Equator. Later Christian thinkers thought that this either meant that Jesus would have had to make a second appearance in the southern hemisphere, or that those who lived in that impenetrable part of the world were automatically condemned to the fires of hell.

[6] That’s port for all you sea dogs out there. The right hand side of a ship is called starboard.

[8] The name of Australia, for a long time also called New Holland, was popularised by British explorer Matthew Flinders in the early 1800s; he thought the name had a better ring to it than the rather clunky-sounding ‘Terra Australis’.

The Arab Spring: The Third Phase of the Revolution

A number of analysts and scholars of the Middle East have argued that the revolutions and uprisings taking place in Libya, Egypt, Tunisia, Yemen and Syria are the first of their […]