‘Midway in the journey of our life

I came to myself in a dark wood,

for the straight way was lost.

Dante Alighieri was about 35 and suffering from what we now would call a mid-life crisis, when he wrote these lines [1], the opening stanza of the Divine Comedy.

As in many other times and places, Dante uses the journey as a metaphor for his (and our) own transient existence. Is it then not reasonable to look for a solution to life’s problems in maps?

Jessica Pinney seems to think so. The 28-year-old Australian sound artist suffered from bouts of depression when living in London for a while. She found her frequent walks through Richmond Park so therapeutic that she had a map of the park tattooed on her left thigh when she returned to Melbourne recently.

“I went to [Richmond Park] each day and it made everything bearable”, Ms. Pinney was quoted in London’s Evening Standard newspaper. “I’ve never felt as at ease or as at home as I do when I’m there. I learned all I could about it and am still learning about the wildlife”. 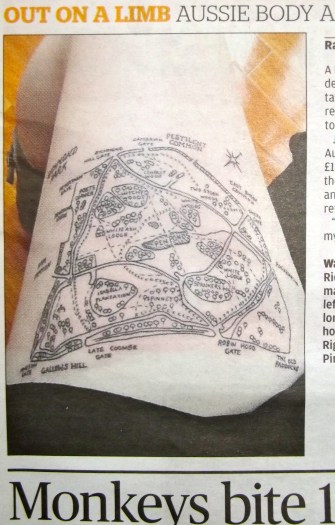 If you’ve ever seen a picture of a herd of wild deer with the London skyline at its back: that’s not Photoshop; that ‘s Richmond Park. Located south of the Thames, Richmond Park (3.7 sq. mi) is the largest of London’s eight Royal Parks [2] – and entirely walled, in order to keep in a total of 600 deer and other wildlife.

Like many of the other (albeit smaller) Royal Parks in London, Richmond Park started out as a hunting ground fit for a king, in this case Charles I [3], who moved his court to the area in 1625 to escape an outbreak of the plague in London. The wall dates from 1637, as does the right of way for the public [4].

The tattoo on Ms. Pinney’s thigh – oriented with north toward her toes, making it easy for her to read the map when she is most in need of it (when feeling melancholy, or, as she suggested herself, “[…] if I ever get asked for directions there – I can pull down my trousers or pull up my skirt and give them some really good advice”).

Most of the landmarks identified on Ms. Pinney’s tattooed souvenir of her soothing walks are named by their actual name: Isabella Plantation, Spankers Hill Wood and Robin Hood Gate at the southern end of the park; the Pen Ponds and White Ash Lodge in the middle; and Two Storm Wood and Poet’s Corner in the park’s northern reaches.

A few other areas have been marked with new names, no doubt reflecting Ms. Pinney’s own experiences in the park. Sidmouth Wood has been renamed Witchy Woods on her map, and what looks like Saw Pit Plantation is now White Woods. Pesthouse Common has been slightly altered into Pestilent Common.

For many, tattooing such an elaborate map may seem like an excessive way to memorise and preserve the park’s therapeutic effect, however beneficial. But surely Ms. Pinney’s memento of Richmond Park is puny compared with Princess Augusta’s. This sister of King George III was married to the Duke of Brunswick in Germany. Homesick for England, she requested that a copy of Richmond Park be laid out for her in the city of Brunswick. The domain was acquired by the city of Brunswick in 1935, on condition that it be preserved as-is, and indeed is still called… Richmond Park.

This map was spotted in The Evening Standard of Friday 7 June.

[3] Charles I (b. 1600, r. 1625-1649) was the last English king to be executed; his life is revered and his death commemorated by, among others, the Society of King Charles the Martyr, which defends the Catholic tradition within the Anglican church, the liturgical option promoted so fatally by Charles I.

[4] This right of way was suspended from 1751 by Princess Amelia, who as Ranger of the Park closed access to those few whom she granted special permits, to 1758, when a local resident took a gatekeeper to court, and won. Full public access has since been enshrined in law by an Act of Parliament, but the ancient right for the public to remove firewood has not been retained.

The science fiction dream of a traversable wormhole is no closer to reality, despite a quantum computer’s suggestive simulation.
Up Next
Culture & Religion

On Father’s Day, Exploring the Psychology of the Father-Child Bond

New research suggests that the father-child bond is remarkably similar to the mother-child bond in terms of the essential physical communication that takes place during a child’s infant years.