In the Netherlands straight after World War II, there existed plans both official and unofficial to annex a large area of Germany as a way of obtaining war reparations (plans not to be confused with the more fanciful, pre-war plans described in posting #50 on this blog, which were used by the Nazis to scare the Germans into fighting to the bitter end).

The SBA’s target immediately after the war was to create momentum within the Netherlands for annexation of German territory. In brochures, it proposed the so-called Wezergrens (’Weser Border’, after the river). The slogan was: Nederlands grens kome aan de Wezer (’Let the Dutch Border Reach the Weser’). 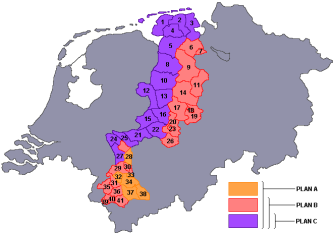 The NCG’s task was to study in specific task forces the feasibility of the plan. The mineral wealth, agricultural area and industrial potential for the intended areas were meticulously charted. The NCG presented its conclusion to the Dutch government at the end of 1945. It became known as the Bakker-Schut-Plan, and proposed three formulas for annexation:

The island inspired a Soviet SF novel and movie