Virtually every profession has a patron saint (1), but not so cartography (2). That’s a shame, because that was going to be my intro into this map, showing the distribution of towns and cities in Europe whose name starts with Saint (or the equivalent in the local languages).

The topography of saintliness varies greatly throughout Europe. The data, collected from the databases of the U.S. National Geospatial-Intelligence Agency by Polish infographic producers Biqdata, shows 20,808 such places across the continent. Here is the run-down per country:

France, now a beacon of ‘laïcité’ – the French version of secularism – in previous centuries prided itself on being ‘la fille ainée de l’église’ (the oldest daughter of the church). And its Christian heritage still shows in the sheer number of saintly place-names, from Saint-Denis and Saint-Cloud near Paris to Saint-Brieuc in Brittany and Saint-Laurent-du-Var in the Provence.

No less than 43% of the European total of ‘Saint(e)’ names occurs in France, with areas of higher density in Normandy, and the Loire and Rhône valleys. The north, northeast and southwest seem to have been less touched by holy topography.

Runner-up, by about half of the French total, is Spain. With 4,444 ‘San’ or ‘Santa’ topographies, it represents 21.5% of the European total. But here the regional distribution is more skewed than in France, or any other country for that matter: most of Spain is actually fairly saint-name-free, except for a smaller concentration in northeast Catalonia, and a massive communion of saintly red dots in Galicia.

That northwest corner of Spain is also home to Santiago de Compostela, a destination for pilgrims from all over Europe from the early medieval period onward. Which may explain the extraordinary concentration of saintly place names in that region.

With 2,638 cities and towns named after saints, Italy ranks third on the list (12.7% of the European total). The dots are distributed fairly evenly across the country, with higher concentrations in Veneto, the area around Venice, and the Po valley, and lower concentrations in Sicily and the south of the Italian mainland. 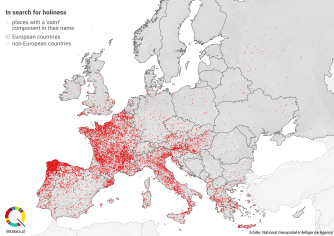 Portugal is a distant fourth, with just 3.8% of the European total. Its ‘holy’ place-names are mainly coastal and northern. Portugal is just a few dozen place-names ahead of Greece, where a central zone across the mainland and the island of Crete seem responsible for most saintly topographies.

Belgium and Hungary are ex aequo at 464 place-names (2.2%), with concentrations in the centre and west of those countries, respectively.

Things get un-holy pretty quickly from here on down. Only five more countries have more than 100 place names with a saintly prefix. The UK has a notable concentration in Cornwall, and a smattering across the south and in Wales. Germany’s ‘Sankt’ cities and towns are few and far between in any part of the country.

Albania’s relatively high place in the ranking on the map seems an extension of Greece’s high score. The same for Croatia, where the coastal convergence of dots could as well be a continuation of the Italian zone of high density. And Russia’s relatively high score looks pretty thin on the ground on the map, considering its gigantic territory.

Place-names starting with the ‘Saint’ prefix (or local equivalent) are surprisingly rare, especially in traditionally Catholic countries like the Czech Republic (70), Poland (55) or Ireland (34).

And whether or not it has to do with the effects of the Reformation or reflects one of the causes of it, especially northern countries seem to lack towns or cities named after saints. Norway, Finland, Sweden and Denmark only have four between them – only one less than tiny (and Muslim-majority) Kosovo.

(1) Some of our favourite patron saints and their causes:

(2) Isidore of Seville, who is celebrated by some as the patron saint of the Internet, is sometimes also accorded patronage over cartography because of the Jerusalem-centred T-O map of the world he produced, which remained influential for centuries to come. Isidore has been officially confirmed in neither capacity by the Vatican.

On New Year’s Eve 1899, the captain of this Pacific steamliner sailed into history. Or did he?
Up Next
Thinking

10 schools of philosophy and why you should know them

There are many famous schools of thought that you have probably heard of, but did you hear the truth or just get a caricature of the idea?