So Boris Johnson is Britain’s new Foreign Secretary. Isn’t that like promoting the iceberg that rammed the Titanic to ship’s first officer?

Many see Johnson as the main architect of the surprising win for Brexit in the 2016 referendum. Britain leaving the EU weakens both polities, but is arguably more detrimental to the UK’s prosperity and even to its very survival.

At one of his first public appearances as Foreign Secretary, at the French embassy in London for Bastille Day, Johnson attempted to strike a conciliatory tone, but was booed by the audience. 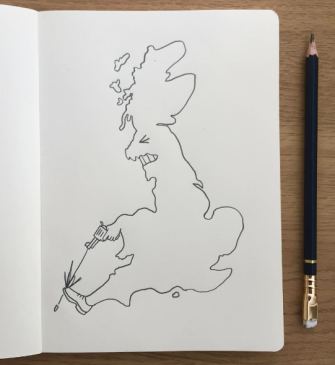 By voting for Brexit, Britain shoots itself in the foot (at least according to this cartoon).

Formerly the mayor of London, the ambitious Johnson is a shrewd operator and ultimate posh boy: his full name is Alexander Boris de Pfeffel Johnson, and he counts both king George II and a Turkish interior minister among his ancestors. But he is also a gaffe-prone populist, who has managed to insult large swathes of the world before even taking the helm at the Foreign and Commonwealth Office.

Facing a lengthy and painful divorce from the EU, Britain needs all the international friends it can get. Yet appointing Johnson as Britain’s top diplomat feels like a deliberate snub – to Europe and beyond. As Jonathan Freedland wrote in The Guardian: “With Boris Johnson in charge of diplomacy, Britain has insulted the world”.

The reaction of some of Johnson’s new colleagues was uncharacteristically blunt. Jean-Marc Ayrault, France’s foreign minister, said that “during the [Brexit] campaign, [Johnson] told a lot of lies to the British people and now it is him who has his back against the wall”.

His German colleague Frank-Walter Steinmeier, called Johnson’s appointment “ungeheuerlich”, i.e. ‘outrageous’ or ‘appalling’. “People [in the UK] are experiencing a rude awakening after irresponsible politicians first lured the country into Brexit and then, once the decision was made, decided to bolt from responsibility, and instead go off and play cricket”, he said – a reference to Johnson’s decision not to contest the leadership of the Conservative party and thus the post of Prime Minister, in the wake of David Cameron’s resignation.

This map shows exactly how much of the world Boris Johnson has already alienated, even before taking up his post at the helm of the Foreign and Commonwealth Office. 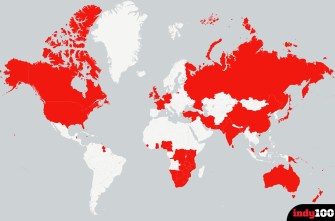 Another empire on which the sun never sets: a world map of the countries insulted by Boris Johnson.

Johnson has not only insulted the previous and present occupants of the White House, but also the next president of the U.S. – by insulting both current candidates for the job.

In 2003, he wrote in The Spectator about George W. Bush: “A cross-eyed Texan warmonger, unelected, inarticulate, who epitomises the arrogance of American foreign policy”.

During Obama’s visit to Britain last April, but ahead of the president’s (anticipated) suggestion that the U.S. would prefer the UK to remain in the EU, Johnson unsubtly sought to undermine Obama’s authority by recalling the removal of wartime Prime Minister Winston Churchill’s bust from the White House. In his column in The Sun, Johnson suggested the removal “was a symbol of the part-Kenyan President’s ancestral dislike of the British Empire – of which Churchill had been such a fervent defender”. Reflecting on Johnson’s appointment, Frans Timmermans, vice-president of the European Commission, referred to Johnson’s choice of words as ‘borderline racist remarks’.

Reacting to one of Trump’s rants in December 2015, about radicalisation in some of London’s muslim areas, Johnson wrote in The Sun in December 2015: “The only reason I wouldn’t visit some parts of New York is the real risk of meeting Donald Trump”, whom he also accused of possessing “stupefying ignorance”.

In 2007, he said this about Hillary Clinton in The Daily Telegraph: “She’s got dyed blonde hair and pouty lips, and a steely blue stare, like a sadistic nurse in a mental hospital”.

During his campaign for Brexit, Johnson in an interview with The Daily Telegraph on 15 May said the European Union’s stated goal of ‘ever closer union’ was akin to the wars of conquest waged by France in the 19th century, and Germany in the 20th: “Napoleon, Hitler, various people tried this out, and it ends tragically. The EU is an attempt to do this by different methods”.

To be fair, the Hitlerian comparison does have the effect of putting an earlier condescending remark on the European project in a much more sympathetic light: “I certainly want a European community where one can go off and scoff croissants, drink delicious coffee, learn foreign languages and generally make love to foreign women”.

Many see Johnson’s anti-EU attitude as tactical rather than ideological, and date it to his time as the Daily Telegraph‘s Brussels correspondent. He enjoyed tickling the prejudices of the right-wing paper’s readership back home. One famous anecdote has him waltzing into a press conference just as it closes, asking: “So what is going on and why is it bad for Britain?”

In 2002, Johnson wrote in The Telegraph of the association of (mostly) former British colonies: “It is said that the Queen has come to love the Commonwealth, partly because it supplies her with regular cheering crowds of flag-waving piccaninnies”.

Last May, Johnson won first prize (and £1,000), for writing the best insulting poem about Turkish president Recep Teyyip Erdogan. His limerick went like this: “There was a young fellow from Ankara / who was a terrific w**kerer / till he sowed his wild oats / with the help of a goat / but he didn’t even stop to thankera.”

In 2005, he observed in The Daily Telegraph: “Compared with the old British Empire, and the new American imperium, Chinese cultural influence is virtually nil, and unlikely to increase”.

In 2008, while closing the Olympic Games in Beijing (as they would move to his city London next), he remarked on China’s favourite sport, ping pong: “it was invented on the dining tables of England in the 19th century. It was. And it was called whiff whaff“.

Last year, he wrote about Russia’s president Putin in The Telegraph: “Despite looking a bit like Dobby the House Elf, he is a ruthless and manipulative tyrant”.

Writing in The Spectator in 2002, Johnson noted about Africa that “(t)he continent may be a blot, but it is not a blot upon our conscience. The problem is not that we were once in charge, but that we are not in charge any more”.

In 2002, Johnson wrote in The Daily Telegraph about then-Prime Minister Tony Blair’s upcoming trip to the DRC: “No doubt the AK47s will fall silent, and the pangas will stop their hacking of human flesh, and the tribal warriors will all break out in watermelon smiles to see the big white chief touch down in his big white British taxpayer-funded bird”.

During a debate in 2014, while on the subject of the Netherlands’ tolerant policy towards soft drugs, Johnson called Amsterdam “sleazy”.

While still the mayor of London, he one-upped the mayor of Bordeaux, a  city of 240,000 people. “I said there were 250,000 French men and women in London and therefore I was the mayor of the sixth-biggest French city on earth”.

So, will the new job instil Johnson with the gravitas that its office holder might be expected to exhibit? Will his wisdom prevail over his wit? Don’t count on it. As the man himself said some time ago: “My friends, as I have discovered myself, there are no disasters, only opportunities. And, indeed, opportunities for fresh disasters”.

Talking about disasters: the Boris Johnson Insult Map brings to mind another world map that reflects badly on the Brits: the World Map of British Invasions. Turns out there are only 22 countries in the world the UK hasn’t invaded. Strangely, Johnson doesn’t appear to have insulted any of them yet. So watch out, Bolivia, Chad and Kyrgyzstan: you may be on the receiving end of Secretary BoJo’s whirlwind honeymoon tour of the world. Let’s just hope he doesn’t bring Prince Philip. 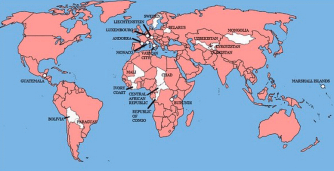 Scientists Get One Step Closer to Developing an Invisibility Cloak

Scientists get one step closer to Harry Potter’s invisibility cloak by creating a material that can conceal objects, with far-reaching commercial applications.