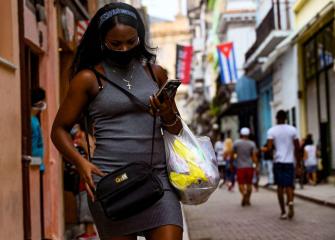 A woman on her phone in Havana, Cuba. Mobile phones have become ubiquitous the world over — and so has the divide between Android and iPhone users.Credit: Yamil Lage / AFP via Getty Images.

Us versus them: it’s the archetypal binary. It makes the world understandable by dividing it into two competing halves: labor against capital, West against East, men against women.

These maps are the first to show the dividing lines between one of the world’s more recent binaries: Android vs. Apple. Published by Electronics Hub, they are based on a qualitative analysis of almost 350,000 tweets worldwide that presented positive, neutral, and negative attitudes toward Android and/or Apple.

Feelings between Android and Apple were pretty tribal from the get-go. It was Steve Jobs himself who said, when Google rolled out Android a mere ten months after Apple launched the iPhone, “I’m going to destroy Android, because it’s a stolen product. I’m willing to go thermonuclear war on this.”

Buying a phone is like picking a side in the eternal feud between the Hatfields and the McCoys. Each choice for automatically comes with an in-built arsenal of arguments against.

If you are an iPhone person, you appreciate the sleekness and simplicity of its design, and you are horrified by the confusing mess that is the Android operating system. If you are an Android aficionado, you pity the iPhone user, a captive of an overly expensive closed ecosystem, designed to extract money from its users.

Even without resorting to those extremes, many of us will recognize which side of the dividing line that we are on. Like the American Civil War, that line runs through families and groups of friends, but that would be a bit confusing to chart geographically. To un-muddle the information, these maps zoom out to state and country level.

If the contest is based on the number of countries, Android wins. In all, 74 of the 142 countries surveyed prefer Android (in green on the map). Only 65 favor Apple (colored grey). That’s a 52/48 split, which may not sound like a decisive vote, but it was good enough for Boris Johnson to get Brexit done (after he got breakfast done, of course).

And yes, math-heads: 74 plus 65 is three short of 142. Belarus, Fiji, and Peru (in yellow on the map) could not decide which side to support in the Global Phone War.

What about the United States, home of both the Android and the iPhone? Another victory for the former, albeit a slightly narrower one: 30.16 percent of the tweets about Android were positive versus just 29.03 percent of the ones about Apple. 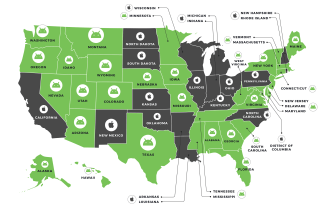 There can be only one winner per state, though, and that leads to this preponderance of Android logos. Frankly, it’s a relief to see a map showing a visceral divide within the United States that is not the coasts versus the heartland. 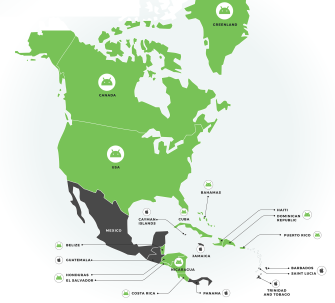 Only eight of North America’s 21 countries surveyed fall into the Apple category. 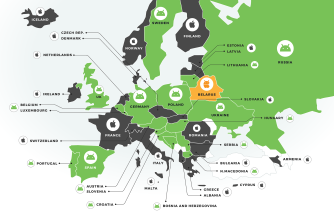 In Europe, Apple wins, with 20 countries preferring the iPhone, 17 going for Android, and Belarus sitting on the fence. 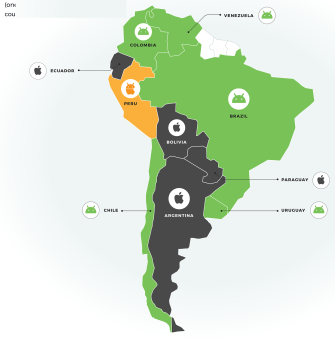 In South America, the divide is almost even.

Africa: watch out for Huawei 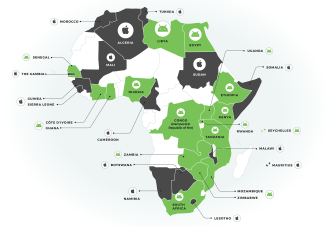 In Africa, Android wins by 17 countries versus Apple’s 15.

Huawei — increasingly popular across the continent — could soon dramatically change the picture in Africa. Currently still running on Android, the Chinese phone manufacturer has just launched its own operating system, called Harmony. 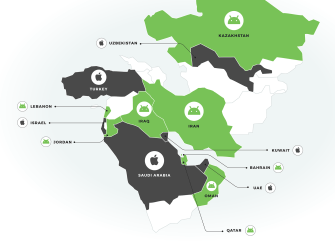 In the Middle East and Central Asia, Android wins 8 countries to Apple’s 6.

Asia-Pacific: Apple on the periphery 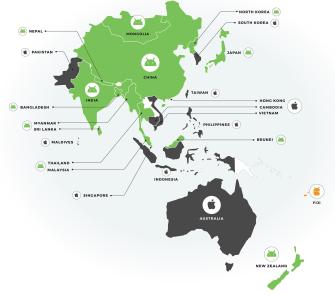 Another wafer-thin majority for Android in the Asia-Pacific region: 13 countries versus 12 for Apple — and one abstention (Fiji).

Experts point to the fact that both operating systems are becoming more alike with every new generation as a potential resolution to the conflict. But as any student of human behavior will confirm: smaller differences will only exacerbate the rivalry between both camps.

In terms of sheer productivity, “-gate” has no peer. Wikipedia’s list of -gates has over 260 entries.
Videos

Reality is more distorted than we think.
▸
with
Big Think
Strange Maps

Starting just about now, leaves start changing color from north to south, high to low, light to dark.
Up Next
Diversity & Inclusion

A textbook pregnancy consists of three trimesters. The baby develops at a relatively predictable rate during this time, from pomegranate seed to avocado to watermelon. And mom’s body adapts accordingly […]