A picture is worth a thousand words, they say. And a map? If it’s a good one: at least a thousand pictures. Few simple things are as immediately expressive as a well-crafted cartogram – a map adapted to demonstrate the range of a certain dataset.

For some good examples, head over to the Data Atlas of the World, a growing collection of world maps, each revealing at a single glance the state of the planet, for such aspects as the population density, the distribution of religion, the level of corruption, variations in life expectancy and GDP, and many other parameters.

Here are a few examples: 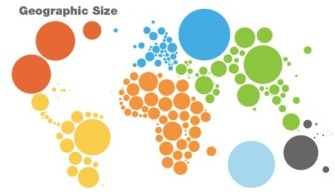 What if the best cartographic projection is not a map but a cartogram instead?

Wait a minute, do we need a special map to show us how big the world’s countries are? Don’t our regular maps do a good enough job? Actually… No.

The earth is a globe – almost everyone is on board with that (see #1017). That’s a three-dimensional object – one dimension more than your standard, flat map. Ergo: any cartographic projection of a globe onto a map will lead to some distortion of geographic fact.

And the Mercator projection, still popular after all these centuries, will do so more than most – especially towards the north and south poles. Check out #954, an earlier post showing you how to drag and drop whole countries on top of each other to get a sense of their actual sizes.

However, this map neatly solves the problem of the missing dimension. It turns each country into a circle corresponding to its geographic size – without the distortive effect of cartographic projection.

Russia clearly is the world’s largest country, but not as large as ‘Mercator Russia’. The other geographic giants stand out immediately: Canada, the US, Brazil, China and Australia – curiously, all just about of equal size.

Sprinkled across most continents are mid-sized nations like Argentina, DR Congo and India. Only Europe consists entirely of countries that are either relatively small – yes, that includes you, France, UK and Germany – or positively tiny.

Territorial giants can be population mini-mes, and vice versa.

Isn’t it curious that Argentina and India are in the same geographic size category? Because their population sizes almost couldn’t be farther apart: India has 1.4 billion inhabitants, give or take a few million. Argentina only has about 45 million. That’s one thirty-first of India’s population!

This map reflects that difference. The dataset powering the cartogram isn’t area, but population. And it’s a whole different world.

A geographic mini-me like Bangladesh now rivals a territorial giant like Russia for size. (In fact, there are now considerably more Bangladeshi than Russians: 165 vs. 146 million). As mentioned, India blows Argentina away. And China is the biggest cheese wheel on this map, about 50 million inhabitants ahead of India – for now.

Canada and Australia, so visible on the previous map, have shrivelled away – totally overshadowed by their respective neighbors, the US and Indonesia. Nigeria is Africa’s population superstar, while it’s now more obvious which are the so-called Big Five countries in western Europe: the UK, France, Germany, Spain and Italy. 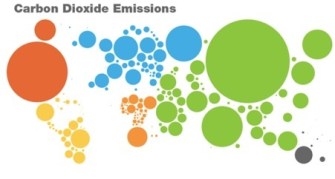 Emission levels are a crude indication of economic development – and a more acute one of environmental damage.

Here’s another way the global cookie crumbles: Carbon dioxide emissions. As a by-product of industrialisation, it’s a crude measure of a country’s economic maturity.

But as a greenhouse gas, CO2 contributes to climate change. Most countries have agreed to cut back their emissions. In virtual unanimity, the world’s countries in 2016 decided to reduce their CO2 emissions.

As this map shows, they’ve got their work cut out for them. If we look at CO2 emissions in absolute terms, China again leads the world, with the US and India in second and third place.

Put together, Europe’s various states put the continent firmly on the world map, with major contributions by Russia and Germany.

Africa’s CO2 emissions are negligible by comparison, except for South Africa, the continent’s most industrialised economy. In Latin America, only Mexico and Brazil belch out CO2 in world-class quantities.

The emissions of the world’s most advanced economies have to start coming down quickly – as per the 2016 Paris Agreement. In the first place, to avoid overheating the planet.

But by extension, the more sustainable methods of energy generation now being developed will also give developing economies a chance to catch up without frying the planet. The alternative? Just imagine each of those circles in Africa swelling to European size. Then we might as well start packing our bags for Antarctica (see #842).

For these and many more insights into the world today and tomorrow, visit the Data Atlas of the World. The collection grew out of a world map of religions, previously discussed here (see #967).

These and other samples are free to view. More (and more detailed) maps with country labels and data specifics are available behind the paywall.

Birthrates are cyclical and have gone up and down throughout history.
The Present

Too few babies — not overpopulation — is likely to be a major problem this century.
Strange Maps

China’s most important border is imaginary: the Hu Line

First drawn in 1935, Hu Line illustrates persistent demographic split – how Beijing deals with it will determine the country’s future.
The Present

Live on Monday: Does the US need one billion people?

What would happen if you tripled the US population? Matthew Yglesias and moderator Charles Duhigg explore the idea on Big Think Live.
▸
with
Charles Duhigg
Up Next
Life

The researchers hope to develop a no-trace plastic to curtail marine pollution and ghost fishing.