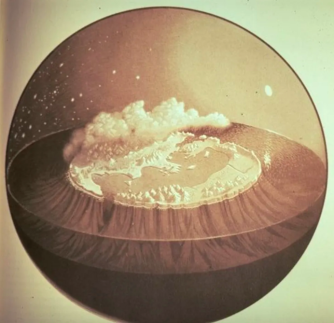 Looks like a snow globe: The world according to Homer.

‘It is no surprise,’ writes The Economist, ‘that the industry clobbered hardest by the COVID-19 pandemic is the one responsible for helping spread it to the four corners of the earth.’

Even without further context, you will have guessed the economic sector in question: the airline industry. But if you’re of a particular (some would say: peculiar) mindset, another thing will have struck you about that sentence.

The four corners of the earth! Aha! How ever much they try, even the mainstream media can’t completely cover up the truth: that our earth is flat, not spherical! And this in a piece about airlines!

That last bit is the icing on the cake, if you’re a flat Earther. Airlines are some of the worst offenders against flat Earth truth, what with their assertions that you can fly around the world and go east by winging it west; or north, if only you keep going south long enough.

Let’s not begrudge our putative flat Earthers their chuckle. For that third thing stalking the above sentence—the coronavirus—could prove more devastating for their belief system than they may yet surmise.

In the oft-quoted words of Ernest Hemingway, bankruptcies happen in two ways: “Gradually, then suddenly.” That also applies to intellectual bankruptcies, and their demise too is speeded up by crises like the current one.

One silver lining of earth-shaking emergencies like these is that they tend to reaffirm the value of common sense, fact-based discourse and rational leadership. Some have already argued that the coronavirus will sound the death-knell for populism. And perhaps it will prove the last straw for flat Earthism too.

What goes up, must come down: the rise and fall of the flat-Earth trend

As this Google Trends graph shows, flat-Earth theory had been growing in popularity since the mid-2010s—one more symptom of the generalized blurring of the line between fact and opinion. But eventually the novelty of taking ‘fake news’ for real starts wearing off. The popularity of ‘flat Earth’ as a search term peaked at the end of 2017 and has since been in decline. Two exceptions:

The cruise was scheduled for this year but may not go ahead as planned, for obvious reasons. But even if it did, and failed, that in itself wouldn’t be the end of flat Earthism. Like ufology, its defeats merely enhance its belief in the vastness and intricacy of the conspiracy it seeks to unmask. 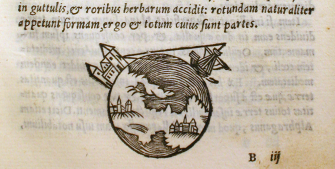 Excerpt from Tractatus de Sphaera (‘On the sphere of the world’), published in 1230 AD by Johannes de Sacrobosco (a.k.a. John of Holywood), clearly showing the nautical proof for the earth’s curvature. Sacrobosco’s book was required reading at European universities for the next four centuries.

Flat Earthism has been endemic since the dawn of human consciousness. For indeed, our own eyes show us that our immediate surroundings are (relatively) flat. That false certainty was codified in early literature.

But that doesn’t mean that flat Earthism has been the default position throughout history, only to be ‘defeated’ relatively recently by modern science. Even the ancients caught on to the spherical Earth pretty quickly.

If flat Earthism lingered on until recent times, it’s mainly because of Biblical literalists and other religious fundamentalists. They have fought a losing battle against the wealth of evidence increasing over the centuries, from science itself and—since the start of the space age—from the images and testimonials brought back by satellites and astronauts.

Flat Earthism has taken such a beating that it has become marginalized even within Christian creationism: Why would creationists bother to reject scientific astronomy too when they have trouble enough concentrating on just geology and biology?

The dying movement was ‘saved’ in recent decades by secular skeptics, who transformed religious dogma into anti-establishment meme. The frame of reference for Latter-Day Flat Earthers is not so much the Revelation as the Conspiracy. Their defense of the flat Earth is motivated by a big, bold rejection of modern life and all its hypocrisies, compromises and disappointments. It’s no wonder that many of these modern flat Earthers also tick the box that says ‘the Moon landings were faked’. 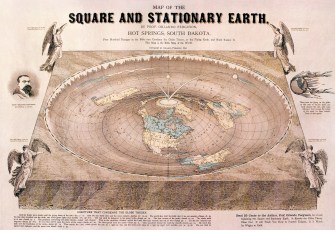 Orlando Ferguson’s map of the square and stationary Earth (1893): “Four hundred passages in the Bible that condemn the Globe Theory, or the Flying Earth, and none sustain it; this map is the Bible map of the world.”

However, even though the mountain of evidence against the flat Earth may be easily dismissed as part of the vast ‘globularist’ conspiracy, its main problem ultimately is its own internal inconsistency. Maximum points to Elon Musk for neatly summarizing that inconsistency in a simple question: “Why is there no Flat Mars Society?”

If our earth were a disc world, it would not only be uniquely different from easily observable objects in the sky, that uniqueness would also require an explanation beyond that of accepted science. In short, a flat Earth can only be explained by the existence of a divine Creator—or by powerful technology unknown to mankind.

On a flat Earth, many theories and observations that fit with the spherical Earth model no longer make sense. These include:

Yes, gravity. Flat Earthers who have given their model some thought (emphasis on some), often claim gravity doesn’t exist. That’s because equal gravitational pull only really makes sense on a globe. Towards the edges of a disc world, gravity would pull at you from an increasing angle instead of straight down. And not just dear old you. Air and water would also be pulled toward the central North Pole, leaving the edges bereft of both.

So, if gravity can’t make a flat Earth model work… gravity must be wrong. The flat Earth counter-model: a disc world that is accelerating upward at a rate of 32 feet (9.8 meters) per second squared, giving the illusion of gravity.

Nor can flat Earthers explain why the shortest distance between Australia and South America isn’t over the North Pole. Or why people at any edge of the disc see the same stars in the sky—yet those differ from the heavens at the centre of the disc. 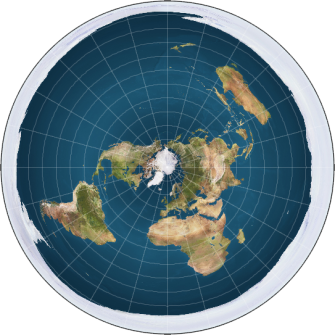 Map of the flat Earth, showing the ice wall at its outer limits.

These are just few slingshots from the vast and well-stocked arsenal of scientific arguments against the flat Earth model. But most flat Earthers are less interested in arguing with scientists than in cherry-picking half-truths that allow them to claim the title of lone wolves, fighting for truth against a vast network of conspirators.

But here’s the thing. Just limiting ourselves to the personnel involved in the space race, that network numbers in the hundreds of thousands and is spread out over various competing countries and organizations. And yet, it has managed to enforce a total omertà for more than half a century.

That’s testament to the power of the conspiracy. Yet at the same time, it is too weak to stop flat Earthers from spreading their message. But most importantly: That vast and costly conspiracy, both so successful and unsuccessful, serves no apparent purpose.

Except if that conspiracy is… ‘Satanic’. Ultimately reintroducing religious fundamentalism into the belief system, the divine, flat Earth world view is at war with the globular view, which somehow supports the Devil’s plan with the world.

Meanwhile, the real world has just received a deadly wake-up call from nature, which it is scrambling to contain. COVID-19 will leave a lasting impression on humankind, not all of it bad: The pandemic has demonstrated that our planet’s problems do not stop at national borders, and how ill prepared we are to solve them country by country.

Perhaps this will finally urge us towards an era of truly global cooperation and progress. But at least it should eliminate our patience with fraud, quackery and self-indulgent wrong-headedness, delivering the flat Earth into the dustbin of geography, where it belongs… together with its pre-dustified cousin, the Hollow Earth (#85).

How did the troughs form?
Up Next
Hard Science

New nuclear fusion reactor design may be a breakthrough