Want to move to Middle-Earth? It’ll cost you. You need well over half a million euros to afford a house at Gimli, Legolas or Celeborn. But the one at Palantir will only set you back only €320,000, and the houses on Tolkien Avenue start from as little as €240,000 (1).

No, Middle-Earth has not joined the eurozone. It’s rather the other way round: a small part of the Netherlands has styled itself after J.R.R. Tolkien’s fictional world, the backdrop for The Hobbit and The Lord of the Rings.

Welcome to Geldrop, an unassuming suburb of Eindhoven that has nonetheless given the Netherlands a prime minister and Andy Warhol a pop art model (2).

The town also created the world’s densest Tolkien-themed street grid: an estate covering about a quarter of a square mile, containing about 50 streets, avenues and paths carrying names taken from Tolkien’s various epics. 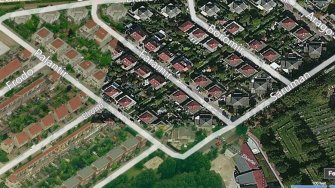 The area was built up in the late 20th century in Genoenhuis, a district of Geldrop bordered by the E34 motorway in the south and the Eindhoven to Weert railway in the east. On the map, part of the estate looks ring-shaped – which gave one town planner the idea to link the area to Tolkien.

Themed street names are not uncommon, usually for districts planned and developed from scratch. Some examples:

Indeed, the practice is particularly popular in the Netherlands, and the positioning of the themed street names in Geldrop exhibits a degree of consideration that goes beyond merely plonking down some random names on a map. 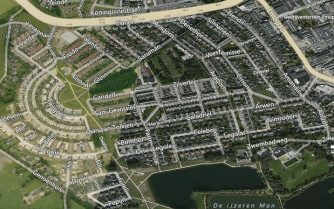 The main road through the area is called Laan van Tolkien, or Tolkien Avenue (3). North of that lane are roads named after the men of Gondor: Faramir and Boromir, Denethor and Aragorn. South of those streets and south of the cemetery, but still north of Tolkien Avenue are a number of streets named after men and women from Rohan: Theoden, Eomer, Eowyn.

A bit further south are roads reminiscent of Elvish persons and places: Galadriel, Arwen, Legolas, Celeborn, Nimrodel, Amroth and Lorien. Geldrop seems particularly keen on the dwarves who appear in The Hobbit and The Lord of the Rings. They are almost all here – and so are some of their forebears, many (but not all) in the southwest: Gimli, Gloin, Bifur, Bofur, Bombur, Balin, Dwalin, Dori, Ori, Fíli, Kíli, Farin, Thorin and Durin.

Of course, the great wizard Gandalf cannot fail to make an appearance, nor Frodo. Other hobbits represented on the map are Pippin (both as Pepijn and Peregrijn), Merry (Merijn in Dutch), and Sam Gewissies (Gamgee). Other street names include Erebor, referring to the Lonely Mountain; Palantir, the name of the ‘seeing stones’; Yavanna, a goddess from the Silmarillion; and Bombadil, after Tom Bombadil, a mysterious fellow and possibly the oldest creature in Middle-Earth.

In the northeast of ‘Little Middle-Earth’ are names referring to Numenor, a continent west of Middle-Earth: Cirion, Anarion, Elendil, Valandil, Elros, Silmarien. Even smaller paths have not escaped the attention of the tolkienophile town planner: there is the Groene Weg (Greenway), the Zilverlei (Silverlode) and the Haradpad (Harad Road), for instance.

The place names in Little Middle-Earth follow the general rule that negative names are to be avoided (although not an absolute rule, see #744). Plenty of good guys here – in fact, all nine members of the Fellowship of the Ring get a mention – but just one bad dude makes an appearance on the map: Saruman, the wizard who goes over to the Dark Side. No street named after Sauron, the Evil Lord himself, no Orc Way, no Mordor Road, not even a Gollum Close. But also, strangely: the central character from Tolkien’s oeuvre is conspicuous by his absence – no Bilbo.

Geldrop has the largest collection of Tolkien-themed street names in the world, but not the only one. There is a smaller grouping in Chelmsford, England. It includes Gandalf’s Ride, Hobbiton Hill, Arwen Grove, Thorin’s Gate, Celeborn Street, Goldberry Mead, Gimli Watch, Treebeard Copse, The Withywindle, Butterbur Chase, Lorien Gardens, Gladden Fields and Meriadoc Drive.

There are more Tolkien-inspired street names sprinkled throughout the world, in smaller concentrations.

Many thanks to Andrew Porter, who pointed to a recent article in the Guardian about Geldrop’s fantasy district. Map from Bing Maps. Street sign picture from this page at Tolkien Brasil (which has many more). Warhol image here at eindhovenfotos.nl. 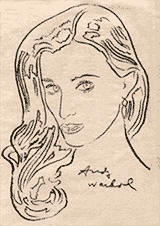 (3) As noted by the Tolkien Library, plenty of places and things have been named after the author himself, including a crater on Mercury, a small asteroid between Jupiter and Mars, a giant tree on Vancouver Island, a Dutch schooner (available for cruises and events), a Street in Orlando and a Lane in Jacksonville, a bar in Zagreb and a restaurant in Birmingham. Reports of a Bistro Tolkien in Bruges, owned by the same proprietors who run The Hobbit bar across the street, are false (or at least outdated). The bar opposite is now called The Habit.

The History of the Double-Blind Experiment

In a time when many agencies and researchers are threatened, let’s remember how the scientific method originated.