That is the question posed on page two of Paul Glover’s Los Angeles: A History of the Future. The answer is, of course, YES – otherwise his pamphlet, most recently published in 2012, would not be 55 pages long.

Glover is the founder of 18 organisations and campaigns for ecology and social justice, ran for mayor of Ithaca NY in 2003 and for governor of Pennsylvania in 2014, on the Green Party ticket.

Throughout his long and varied career, he worked as a gardener, cartoonist, masseur, dishwasher, farmhand, lecturer at Cornell and other universities, sidewalk artist and inhalation therapist – though not necessarily in that order – and much more. He has campaigned against war and Walmart, and for local currencies, better healthcare and urban farming.

In A History of the Future, Glover paints a picture of an L.A. where progress does not mean more cars, concrete and pollution, but less. It is a vision that somewhat reminiscent of that old Talking Heads song in which “The highways and cars/ Were sacrificed for agriculture”.

According to this detailed sequence, the city would become a giant orchard looped with bikeways and solar rail. Industries would return to neighborhood scale, and workers would control them. People would live in ecolonies: solar co-ops specifically designed for this subtropic climate. It is the sort of possibility we hope unfolds during our decades…

You could say it is refreshingly visionary. Or overly optimistic. Or crushingly naïve. To take your pick, read the pamphlet in full. We stopped short at the maps, which distill the transformational message down into a mesmerising cartographic sequence of progress – realistic or not: if it is mappable, at least it has the air of the do-able:

PAST: Ninety years ago, several homes were built on a beanfield. Graded dirt streets connected to a concrete boulevard. Food, fuel and most water were produced locally. Trolleys made transit easy. Air was clean. Homes were safe unlocked.

PRESENT: The land is mostly paved and built on. 400 people live in 74 houses. Most rent. Food, fuel, metals and water are piped, pumped and trucked from great distances. Many commute far to work. Fuel is wasted, air is poor. Crime confines women at night. Garbage is the main product of the neighborhood.

FUTURE STAGE ONE: Community land trusts and limited equity co-ops form to give renters control of land and housing. Some backyard paving, driveways, alleys and fences are removed for gardens and playgrounds. Fruit and nut trees (green areas) are planted. Solar collectors are installed. Kitchen waste is composted.

FUTURE STAGE TWO: Most garages are removed to extend gardens and food trees. Cars are parked at neighborhood’s edge. Solar cells produce most electricity. Compost toilets improve soil and reduce water use. Metal and wood are stored for recycling. Food, tools and skills are shared and traded.

FUTURE STAGE FOUR: First ecolony is completed, two others are being built. They are semi-underground for earth cooling and heating. A spyramid community-center is begun in the middle. Ocean water is desalinated. Bikeways connect neighborhoods. A trolley system is revived.

FUTURE STAGE SEVEN: The neighborhood has become an orchard looped with bikeways and solar rail. All food is from interneighborhood sharing. Most physical and emotional needs are met within walking distance. Cars are gone. Population stabilizes at 430. New rituals evolve.

A bit further in the book, Glover shows how a particular junction of traffic arteries could turn from a place where 3,000-pound cars propel 150-pound people along concrete and asphalt streets to an environment in which most physical and emotional needs are met within walking distances. Cars are gone. 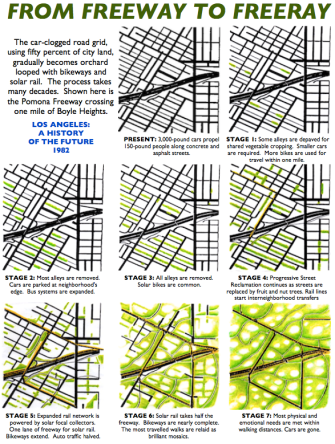 Is this what the future of L.A. will look like? Considering the antiquated look and feel of the book, orginally published in the early 1980s, one could be tempted to argue that this vision of the future belongs in the pre-digital past.

But online networking has made physical commuting less necessary, and underpins the rise of sharing as the basis for new business models. Who knows, the future of L.A. looks less like the one portrayed in the Terminator movies, and more like the one shown on this maps.

Would a re-greened metropolis be an improvement over today’ Los Angeles? Talking Heads seem to be in two minds about it:

Once there were parking lots

This was a Pizza Hut

Now it’s all covered with daisies

I miss the honky tonks,

And as things fell apart

Nobody paid much attention

I dream of cherry pies,

We used to microwave

This was a discount store,

Now it’s turned into a cornfield

I can’t get used to this lifestyle

Images from Paul Glover’s book The Future History of Los Angeles, which can be read online here, or bought here. For the front page of Mr. Glover’s website, go here.

Ask Ethan: Can the Universe ever expand faster than the speed of light?

How the Universe’s expansion rate continues to baffle us.“In expanding the field of knowledge we but increase the horizon of ignorance.” –Henry MillerIt’s the most fundamental law of special relativity, and […]