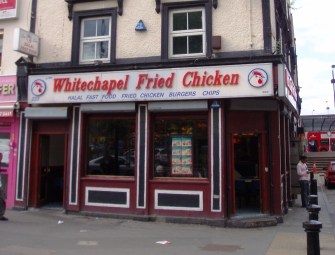 Chicken shop capital of the world

For many Londoners, a night out isn’t complete without a visit to their local chicken shop. For many others, fried chicken is a quick, cheap, and tasty substitute for a healthy meal. That’s why there are more than 8,000 purveyors of processed poultry in the British capital.

Fried chicken, often served with chips, is the reincarnation of that British fast food staple, fish and chips, adapted to the spicier tastes of London’s immigrant communities — many chicken shops are halal, for instance.

London being London, even the lowly chicken shop has been gentrified. You can get your upmarket fried fowl at gourmet versions with ironic names like “Mother Clucker” and “Absurd Bird.” There’s even a vegan version called “Temple of Seitan (sic).”

But the standard chicken shop is still decidedly downmarket and comes with a fair bit of social stigma attached. The fried chicken shop has even become a yardstick for the undesirability of an area in terms of real estate. The Coffee vs. Chicken Index measures the number of coffee shops and chicken shops in a given area. More coffee shops means the neighborhood is gentrifying. A preponderance of chicken shops suggests the opposite (the area is gently frying). 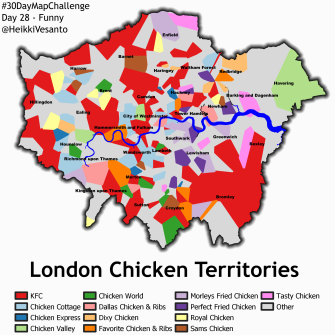 KFC is the cock of the block, but Londoners love their local brands too.

There’s more than a whiff of fried chicken in the air in Mile End Road, in the east London borough of Tower Hamlets. It has so many chicken shops it’s also known as the Chicken Shop Mile. There are 42 chicken shops for each secondary school in the borough. Not coincidentally, Tower Hamlets has the sixth-highest rate of child obesity in the U.K. One in four kids aged 11 is obese.

The link between childhood obesity and fried fast food is more than anecdotal. Many chicken shops have offers are explicitly aimed at children. In retaliation, some local councils now forbid hot food takeaway restaurants close to schools. But as this map shows, chicken shops are as much London landmarks as red double decker buses. Innumerable chains compete for the favor of the chicken-loving customer. This map shows some of the larger brands.

Cock of the block is Kentucky Fried Chicken, which opened its first London outlet in Finchley in 1968. KFC’s success spawned a legion of competitors, often echoing the southern flavor of the chain’s name – see Dallas Chicken & Ribs and Dixy Chicken, for instance.

While KFC dominates in various areas across the capital, some chains have a very local, fiercely loyal fan base. Morley’s, for instance, is a mainly south London phenomenon. Havering is Chicken Valley.

This map was made by Heikki Vesanto, who adds: “It’s a simple Voronoi network for the closest fried chicken restaurant, but it is missing quite a few establishments. I would need a better source of restaurants.” Time for some finger-licking field work.

One of the best-known allegorical depictions of love has a rather pessimistic male twin.
Up Next
Health