To blunt the rise of COVID-19, EU member states have instinctively reverted to the age-old remedy against ‘foreign’ dangers: tightening controls at their national borders. The measures may be limited to increased ID checks, but in many cases, borders are now closed to all but each country’s own citizens. That goes against one of Europe’s fundamental freedoms: unhindered movement within the so-called Schengen Area – its recent 25th anniversary was an understandably subdued occasion.

“Sometimes you only realise how much you miss something when it’s gone,” mused EU Commissioner for Home Affairs Ylva Johansson on 26 March. “Today, more than ever, we realise we can take nothing for granted.”

Of course, the current border controls were announced as strictly temporary. But history shows ‘temporary’ infringements on acquired freedoms are easier to impose than to remove. 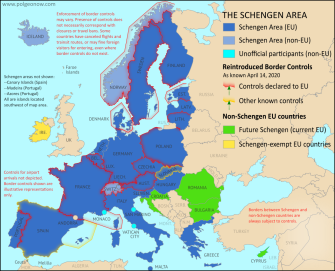 The Schengen Area is supposed to be solid blue, but the current crisis has criss-crossed it with old obstacles.

This map, published earlier this month by Political Geography Now, shows the current state of affairs within Europe.

The area in blue is the Schengen Area. It is named after the Luxembourg town, symbolically located at the border tri-point with France and Germany where the Schengen Agreement was signed. It has been called the ‘crown jewel’ of the European project, as it ensures free movement of people and goods within the Area.

However, the Schengen Area (usually referred to as just ‘Schengen’) does not entirely overlap with the 27-member European Union.

Free movement is a core feature of the European project. It has helped foster European cooperation, grow the European economy and – certainly not least – strengthen the ties that bind the peoples of Europe.

For ‘Schengen’ has given rise to the so-called ‘EasyJet Generation‘: young Europeans for whom freedom of movement is all they’ve ever known, who have friends and family all across the continent, and who are just as likely to go to university and find jobs outside as inside their native country. For them, closed borders are an entirely new phenomenon.

As the map shows, almost all Schengen Area countries have put up controls at their national borders. Most (in red) have been declared to the EU. In the case of Spain, Poland and Slovakia (in yellow) they are of some other nature. Only the Dutch-German border seems exempt from additional controls.

On the one hand, closing national borders is an understandable reaction to COVID-19. Limiting travel limits social interaction, which limits the spread of the virus. National borders are ‘natural’ locations for these limits, both in an operational sense – the dormant border infrastructure is easily reactivated – and on a more symbolic level: it allows national governments to underscore the extent of their particular measures.

Thus, national borders, which since 1995 had slid into irrelevance, again re-emerge as markers of substantial differences between European states. And of more trivial ones, as was the case in Baarle, where a shop built across the Belgian-Dutch border was literally half open and half closed.

It’s not the first stress test of the Schengen model. In September 2015, Germany re-established checks at its land border with Austria – a response to the large wave of asylum seekers entering the EU from Greece. That measure led to a domino effect, with other countries not wanting to become the last place where the migrants would get stranded. Austria introduced checks on its southern border, with fellow Schengen countries Slovenia and Hungary. Those two, at Schengen’s outer limits, soon started turning away migrants at their southern borders. Other countries re-introducing ‘internal’ border checks within Schengen at that time were France, Belgium, Denmark, Sweden, and Norway.

The Schengen Agreement actually allows for the reinstatement of border controls, but under special circumstances and for a temporary period. Six Schengen countries – Germany, France, Austria, Denmark, Sweden and Norway – have maintained border checks since the 2015 migration wave, although the rationale for the measures may have changed. France, for instance, has used the threat of terrorism to justify the extension of its border controls. The European Parliament has called out this behaviour as unlawful under the Schengen Agreement.

So in fact, Schengen hasn’t been truly without border checks since 2015. When the corona restrictions wind down, will some border controls similarly linger on, or will the Schengen countries take the opportunity to hit the reset button and go entirely borderless again? Two good arguments for the latter:

The European Commission has plans to shore up the EU’s external borders – making it harder to get in, a condition for some stakeholders to accept open internal borders. That plan also calls for a proportional distribution of asylum seekers across member states, which some are likely to veto.

So, with no decisive action on the horizon, the cracks in Schengen could grow wider – confirming in the eyes of many what the corona crisis has demonstrated: that nation states are the most effective level for the exertion of political power, and that supranational institutions like Schengen and the EU are an irrelevance at best.

A new study looks at what happens when you get infected with two viruses at the same time.
Up Next
Life