Victors don’t just write the history books. They make the atlases too. Places are named and cities are founded by strong-willed go-getters. They’ve seeded our maps with the rush of exploration and the joy of conquest.

Toponymy generally isn’t the province of the melancholy or the morose. They would make terrible explorers and conquistadores. Most days, they don’t even make it out of the house — let alone to that nameless continent across the horizon.

That’s why the register of global place names is skewed toward optimism and progress. Yet there is a small, scattered number of toponyms that delight us by their unvarnished expression of downheartedness, defeat and despond.

One Instagram account, appropriately named @sadtopographies, is uniquely and solely dedicated to collecting these sad place names, pinning their Google Maps likenesses on the webpage like so many depressed butterflies. 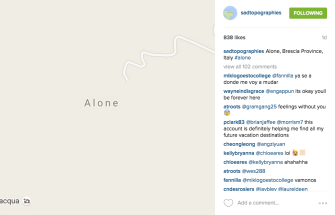 All by itself at the end of a road, Alone seems a test case in self-reference. Except that it is in Italy, and you probably should pronounce it a-LOH-nay. Which does sound a bit more cheerful. 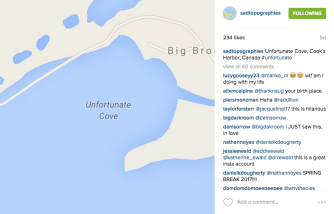 This cove isn’t even good at being bad. It’s just unfortunate, as if it’s the one slight disappointment in a family of rather adequate, merely sufficient coves. 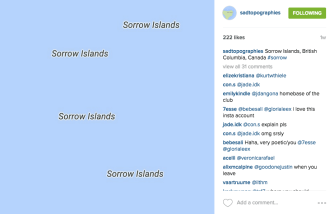 None of these four Sorrow Islands is even visible. Perhaps they drowned in their own tears? 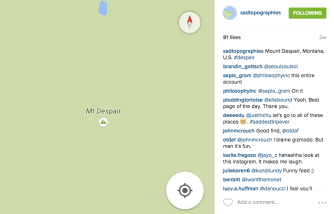 The Slough of Despond is a figure of speech. But there really is a Mount Despair, in Montana. Perhaps a nice destination for your next team-building weekend. Or perhaps not.

Not likely that this was the original, official name. But sometimes those are crowded out by particularly appropriate colloquialisms, however blunt. 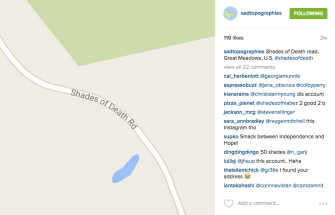 Does this lead to the Suicide Bridge? 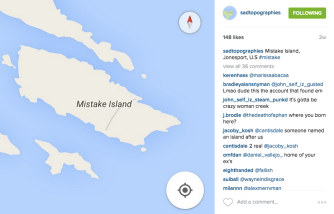 No buried treasure here. Nor sandy beaches. And no palm trees either. 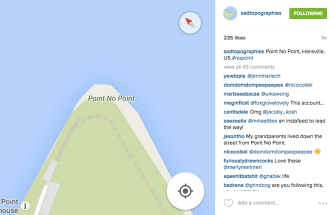 The Instagram page lists quite a few more sad place names, such as Gloomy Lake (Ontario), Melancholy Waterhole (Australia) and Uncertain (Texas). But there must be more sad topographies out there. In fact, Toon Wassenberg, who sent in the link to a story on the above Instagram account, also shared one he found himself. 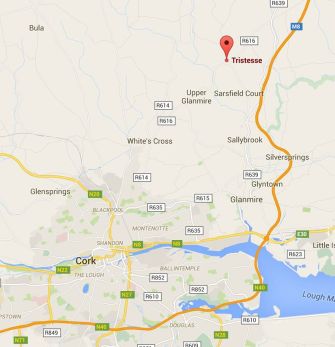 Casing the joint on Google Street View, Tristesse, not far from Cork in Ireland, appears to be an ordinary bungalow on an unremarkable road, surrounded by a wild hedge. What goes on behind those walls?

And here are a few we found: 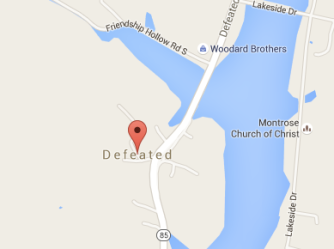 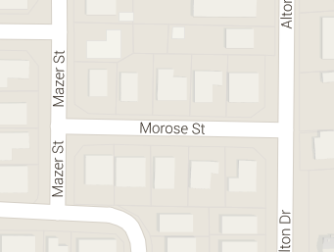 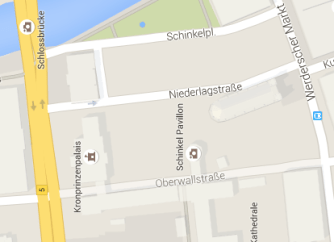 Slap bang in the centre of Berlin, this Niederlagstraße – “Defeat Street.”

We’ve received a few interesting additions to the selection above – many in the comments section below (my favourites: the Antarctic islands of Inexpressible and Reluctant). Also: Niederlagstrasse apparently doesn’t quite mean ‘Defeat Street’, as one or two German-speaking readers have pointed out.

“Niederlagstraße in Berlin does not refer to Niederlage (defeat) – would have been spelled with one more e – but to Niederlag (literally, though archaic: “to lay down”). This is a historic term for a place where merchants had (or were allowed) to put down their wares”, writes Folkard Wohlgemuth. Okay, I will admit my Niederlage. Without further ado: more sad topographies!

David Slauenwhite pointed out not one, but two examples of a Skunks Misery Road, one in Millerton in upstate New York (pictured; possibly continuing into nearby Pine Plains), the other in Locust Valley, a hamlet of Oyster Bay (on Long Island). In fact, there are two more roads commemorating musteline misfortune: in Franklin, Vermont and Templeton, Massachusetts. 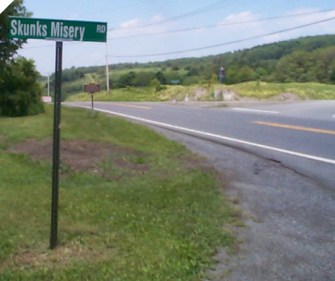 Stephen McCavour refers to Mount Misery, on the Kingston Peninsula in New Brunswick (Canada). There are in fact a few other topographical features also called Mount Misery, one in Voluntown, Connecticut and another one in Pemberton Township, New Jersey. Oh, and yes, all you Tolkienistas, there is also a Mount Doom. Or at least a Doom Mountain, in Brooks Peninsula Provincial Park on Vancouver Island, British Columbia (Canada). 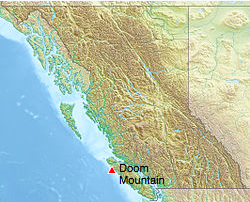 Leif G. Malmgren mentions Verdens Ende, Norwegian for ‘World’s End’ – a tourist attraction at the end of a peninsula south of Oslo. “Once, it was a small world”, he says. Indeed. There are plenty of other World’s Ends, no less than eight in the UK (plus three pubs, plus a movie named after such a pub), two in the U.S., and one in Australia and Sri Lanka each. 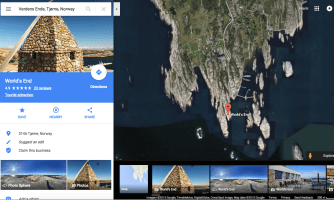 Anton Sherwood points to Leidig Court in Hayward, California. ‘Leidig’ is German for ‘sorrowful’. Fortunately, you only have to cross West Tennyson Road to get to Lustig (‘joyful’) Court. 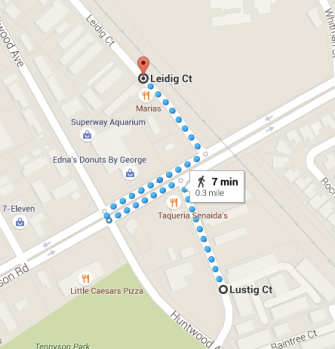 Damien Rudd, who runs the @sadtopographies Instagram account mentioned in the blog, was kind enough to say thanks for the article – and to point out that there really is a literal Slough of Despond, in Georgian Bluffs, Ontario. 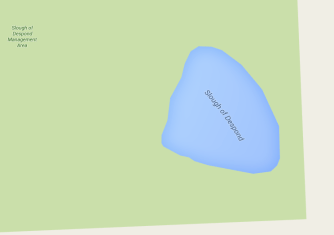 Marc A. Criley reports that in Alabama, there is a Dismals Canyon, “the only known habitation of the dismalites, a fly whose larval form emit a bright blue-green light to attract food and mates”. 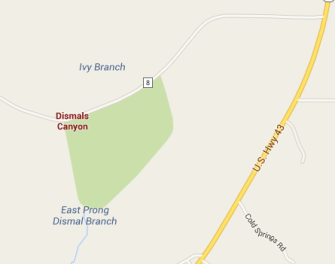 From Austria, Paul Herzberg (“I live fairly near Windpassing, though that’s not particularly sad”) points out the existence of Äußere Einöde (‘Outer Wasteland‘), not far from Einöde bei Villach (‘Desolation near Villach’). I suppose that makes the first, Villach-less desolation the more desolate of the two. 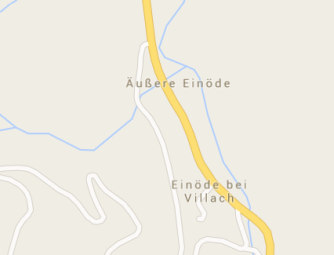 In Australia, says Shane McEwan, there is a Cape Grim, overlooking Suicide Bay. The story attached to both names is quite grim, though nothing to do with suicide: “Suicide Bay got its name after European shepherds massacred an Aboriginal tribe and threw their bodies off the cliff. They named the site of the massacre Victory Hill. A fine example of history (and cartography) being written by the victors”. 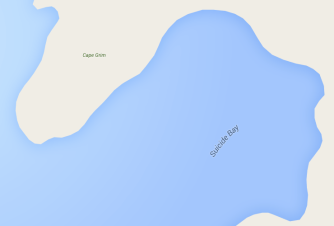 Also in Australia, sent in by Andrew Brown: Lake Disappointment, so named by the explorer Frank Hann in 1897. He noticed creeks in the area flowing inland, but found salt flats instead of a freshwater lake. 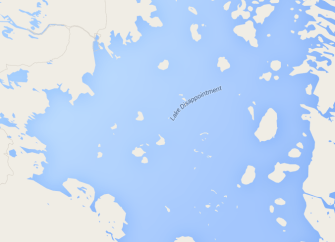 From a salty setback to a foggy one: “Cape Disappointment at the mouth of the Columbia River on the Washington side is the foggiest place in North America as well as having a sad name”, says SounderBruce. 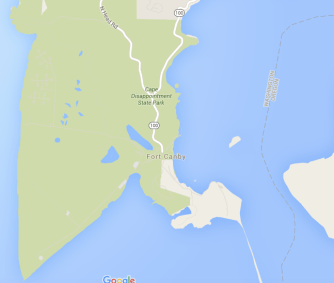 Jorge sent in Useless Bay (‘Bahia Inutil’) in Chile, as well as a few other sad, strange places – a Futile Lake in Canada, and Nameless Place (‘Bezimyane’) in Donetsk oblast, Ukraine. 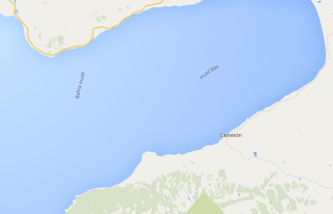 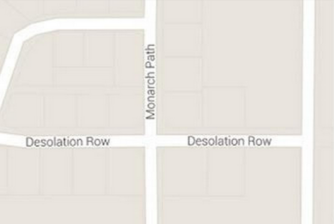 Karin Hosking reveals the existence of a Doubtful Sound in New Zealands’s South Island – balanced out by a Doubtless Bay on the North Island. 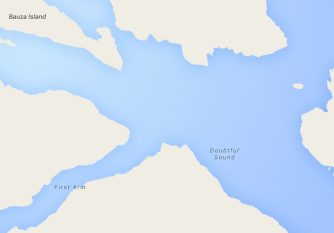 Finally, Andrew Porter points us in the direction of the Canadian town of Porters Lake, Nova Scotia, where you’ll find This Street, That Street and The Other Street. While that does not sound as bad as some of the other names above, imagine living there, and having to provide directions to your house.

“You missed this wonderful confluence of toponymic and cartographic sad place names”, says Tom Williams, referring to Mount Disappointment, in the San Gabriel Mountains in Los Angeles. He quotes its interesting history:

Mount Disappointment has a summit elevation of 5,963+ feet (1,818+ m). It was named “Disappointment” in 1894 when USGS surveyors sighted it from the Santa Susana Mountains, believing it to be the highest point in the immediate area, decided to use it as their next triangulation point. When they reached the summit, however, they discovered that San Gabriel Peak half a mile (0.8 km) to the east was 167 feet (51 m) higher and so moved there instead.

A Nike missile site was located there in 1955 and the summit was flattened to accommodate it. The missile site was abandoned in 1965. The mountain top is now an important telecommunications site for both commercial and government organizations.

“Having been to both locations mentioned below, I can say that San Gabriel Peak is definitely more satisfying”. 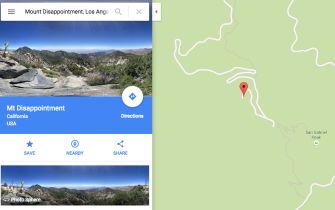 James Williams – any relation? – has some info on another area in California: “In the course of a long work project on the history of the Sacramento-San Joaquin Delta, I came to discover that it was a region bursting with odd/baffling/amazing place names. An artificial watercourse called Telephone Cut, for instance. (…) My favorite is Widows Island, which is now a body of water encircled by the levees that used to maintain the island as dry-ish land. A few miles to the northeast is Disappointment Slough, just around the corner from Hog and Spud islands”. 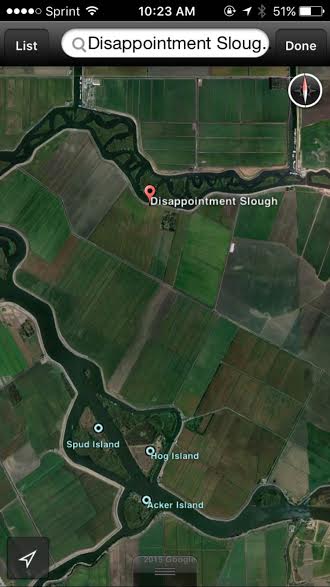 Sara Byrd points to Boring, Tennessee – a toponym so joylessly stale that it almost makes you want to go have a look at all that municipal misery. Other kinds of misfortune are to be found at Yucky Run Road in Moorefield, West Virginia and Smelley Road in Longview, Texas, she says. 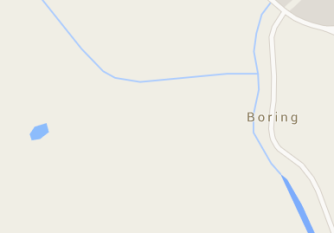 “Similar to the streets of Porters Lake, Nova Scotia, Lake Jackson, TX has a variation of the same theme”, says David Karesh, pointing out This Wayand That Way on a local map.

How could you miss Death Valley in California, ask Cynthia and Mark Hall-Patton. “As the local county museum administrator, I am also particularly taken with Forlorn Hope Spring in Southern Nevada, near Boulder City”, adds Mark, Administrator at the Clark County museum system.

Jennifer Roberts has a peculiar story from eastern Québec: “This cape was named Cap d’Espérance (Cape Hope) by Jacques Cartier, and had a rather capricious naming history. Its name was shortened to Cap Despera, then mistranslated into English as Cape Despair and again into French as Cap Désespoir (Cape Despair) until the end of the 19th century. The village was then named Cape Cove and Anse-du-Cap until the Geographical Commission adopted the toponym Cap d’Espoir in 1953”.

The pithiest contribution is by Dave Johnson, who simply writes: “Pity Me, County Durham, UK”.

Got any more? Let me know at strangemaps@gmail.com.

Sure their students won a debate against Harvard, but that’s only one reason the Bard Prison Initiative is changing the way we think about criminals.