Cheap, durable and multifunctional, plastic is one of humanity’s most successful inventions. From the 1950s to 2015, we’ve produced 8.3 billion metric tons of the stuff. By now, it’s everywhere. It’s also non-biodegradable. And that’s devastating the environment. Only 9% of all plastic waste has been recycled, and another 12% has been incinerated. That means that almost 80%—nearly 6.3 billion tons—has turned into waste with no half-life to speak of: condemned to an eternity as landfill, litter or ocean-clogging junk.

Every year, plastic kills around 1 million seabirds, 100,000 sea mammals and inestimable numbers of fish. The volume of plastic trash in the world’s oceans is currently estimated to be around 150 million tons. No less than eight million tons are added to that every year—that’s one truckload every minute. Between 0.5 and 2.75 million tons come from rivers alone.

Large rivers are particularly efficient conveyors of plastic waste to the oceans, especially in countries lacking a well-developed waste management infrastructure. Up to 95% of river-borne plastic comes from just 10 rivers, scientists at the Helmholtz Center for Environmental Research in Leipzig, Germany have found.

The scientists analysed data on both microplastic debris ( 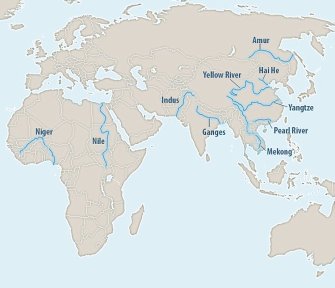 As this map shows, eight of the rivers are in Asia.

Four are solely in China:

Two flow through the Indian subcontinent:

The two non-Asian rivers are both in Africa:

Not all of these rivers are equally guilty. As the graph below shows, the Yangtze is the main culprit, ejecting around 1.5 million tonnes of plastic into the East China Sea. That’s more than the other nine rivers combined. 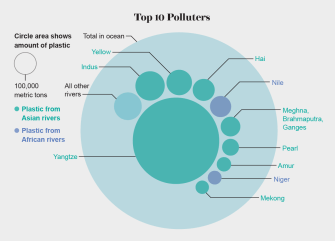 While awareness of the issue is rising, plastic pollution itself is still on the increase as well. In 2016, 480 billion plastic bottles were sold globally. By 2021, that figure will be close to 540 billion. Fewer than half of that total is currently recycled.

If current trends continue, the amount of plastic dumped into the ocean will increase to one truckload every minute today to one every 15 seconds in 2050, by which time plastic waste will literally outweigh all the fish in the ocean.

However, as the scientists from Leipzig point out, quick fixes are possible. Focusing waste management efforts on just these 10 rivers could put a serious dent in the plastic pollution trend. Halving the discharge of plastic waste in Yangtze, Ganges, Niger and the other seven rivers listed above would reduce the global flow of river-borne plastic into the oceans by no less than 45%.

Bassem Youssef: Now I have to answer for this?

In Egypt, comedy can be a matter of life and death. But life in America’s no cakewalk either. Political satirist Bassem Youssef on reinventing yourself, crossing cultural lines, and the future of space exploration.