This map is a decade old, but it feels increasingly topical with every passing year. More than ever, we live in a Walled World.

Even though the stats on the map may have changed somewhat, its shocking main point still stands: the rich countries of the world are, in fact, the world’s biggest gated community.

This world-wide fence is rarely presented to us in its totality; we catch glimpses of its various bits whenever they’re in the news. Those separate pieces don’t necessarily seem to belong to the same puzzle.

The US-Mexico border is far away from “Fortress Europe,” and both are different from Israel’s security wall. Other, similar barriers have their own peculiarities. But in the end, they all do the same thing: keep the poor, huddled masses from the shantytowns off the manicured lawns of the First World. 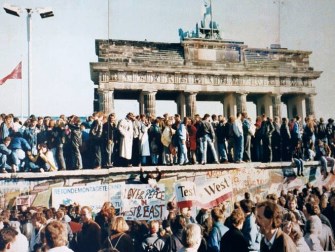 For a brief window of time, opened 30 years ago next month, it seemed history would go the other way. In November 1989, the Berlin Wall came down. Its joyous demolition predicted the end of hard borders everywhere.

That window soon flew shut. The idea of a globalized world with frictionless borders fell out of fashion faster than the bleached jeans and mullet hair of the East Berliners marveling at their first banana in 1989.

Two events stand out: 9/11, and the refugee crisis of 2015. Both increased the fear and suspicion of “others” and remedied it by shoring up the entrance barriers into what is still sometimes — incongruously — called “the West” (1).

At the end of the Cold War, there were just 15 walls separating countries from each other. Now there are at least 70 walled borders worldwide. Since the fall of the Wall, thousands of miles of steel and concrete walls have gone up on international borders. 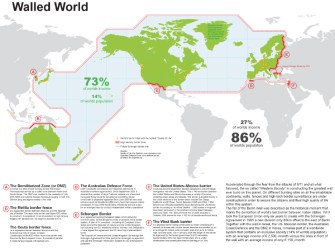 Click to zoom in. The rich world, developed world, first world or Western world by another name: the walled world. Image: TD Architects

As this map shows, the Walled World consists of the U.S. and Canada (in North America); Japan and South Korea, plus Australia and New Zealand (in the Asia-Pacific region); plus basically the entire European Union (2); and also Israel. In 2009, that club of nations represented just 14 percent of the world’s population but earned 73 percent of its income. Conversely, the “gray areas” outside the walls were home to 86 percent of humanity, who scraped together just 27 percent of the world’s income.

The average monthly income inside the wall is around €2,500. Outside, it’s just €150. Money may or may not buy happiness, but it does buy quality of life. The yellow dots, which represent the world’s top 50 cities in terms of quality of life, are almost all inside the wall — only Singapore is outside, and that relatively wealthy city-state should arguably be included inside the wall anyway.

In other words: the poor are many, the rich are few. That’s not a new phenomenon of course, nor are the migratory pressures it causes. That’s where those barriers come in. The map lists some examples, the locations and the circumstances of which are all different — but which are all pieces of the same puzzle shown on this map. 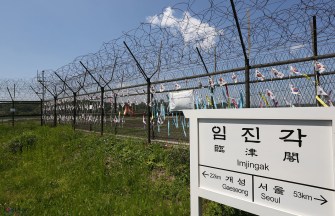 The Demilitarized Zone (DMZ) between North and South Korea.

A. The DMZ between North and South Korea

The Demilitarized Zone (DMZ), which came into being in the ceasefire on July 27, 1953, cuts the Korean peninsula about in half. It’s 155 miles (248 km) long and around 2 miles (3 km) wide. The two sides are technically still at war. Skirmishes at the DMZ have cost the lives of hundreds of Koreans, and at least 50 U.S. service personnel. The border is so heavily fortified that North Korean defectors rather try their luck going north into China than attempting to cross the DMZ.

B. The Australian Defense Force (ADF)

The ADF — charged with the defense of Australia — patrols the waters north of Australia, where incursions by boat refugees are most likely.

Although Trump got elected by promising to “build that wall,” the systematic erection of physical barriers on the 1,954-mile (3,145-km) US-Mexico border already began under the Clinton Administration. At first, it was concentrated on urban crossing points. After 9/11, fencing occurred in more rural/isolated areas as well — both under presidents Bush Jr. and Obama. Over the decades, thousands of migrants have died crossing the border. 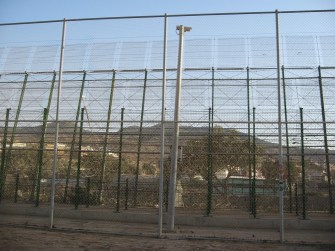 The ‘Valla’ in Melilla, where Europe touches Africa.

Ceuta and Melilla, the two Spanish exclave cities in Morocco, are where Fortress Europe meets North Africa. Built from 1993 with EU funding, a hard border consisting of tall barbed-wire fences equipped with motion sensors tries (and often fails) to keep out the flow of migrants from sub-Saharan Africa. Before making the attempt, many hide in the Gurugu Mountains outside Melilla. Called “La Valla,” the fences have become one of the cities’ major tourist attractions.

The map legend reads: “It took the European Union only six years (after the fall of the Berlin Wall) to create, with the Schengen Agreement in 1995, a new division only 80 km offset to the east of Berlin.” The 26 Schengen Area members (3) have abolished all “internal” passport and border controls and have strengthened border controls and a common visa policy for non-Schengen countries.

In 2002, Israel started work on a concrete barrier separating Israelis from Palestinians. Israel says this is to stop the incursion of terrorists into Israel proper. The placing of the wall, largely beyond the Green Line which constitutes the “official” border between Israel and the Palestinian territories, means 9.4 percent of West Bank and East Jerusalem territory is now included on the Israeli side. Palestinians contend the wall is a land grab and constitutes a de facto border. Almost 90 percent of Israeli settlers in the occupied territories live between the Green Line and the Wall. 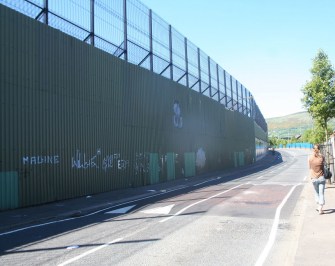 One of the 99 “Peace Walls” in Belfast, Northern Ireland.

Another brick in the wall

Of course, there are many more border walls than these.

Not all border walls are between the First World and the Rest of the World.

Some of the border walls aren’t even between countries, but between neighborhoods.

Border walls are both old and new.

An updated map of the Walled World would contain many more red lines crisscrossing the planet. It feels like it’ll be a while before there’ll be another Berlin Moment, and any of these walls will start coming down again.

(2) On this map still without its most recent additions: Croatia, Romania and Bulgaria.

(3) The EU plus Norway, Switzerland, Liechtenstein and Iceland, but minus the UK and Ireland (who have permanent opt-outs) and Cyprus, Croatia, Romania and Bulgaria (who are obliged by the conditions of their EU accession to join the Schengen Area eventually).

Trees store carbon dioxide, have a cooling effect in cities, and reduce flood risks.
The Present

Nearly 90% of the world’s blind live in low-income countries.
Thinking

Is it ethical to pay people to get vaccinated?

It could lead to a massive uptake in those previously hesitant.
Up Next
Hard Science

Results support Einstein’s theory and the idea that black holes have no “hair.”