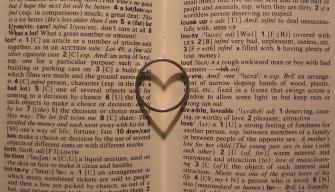 Wedding ring throwing a heart-shaped shadow on the pages of a dictionary.Credit: Roger McLassus, CC BY-SA 3.0

Still, that means that in 2017, 3.8 million Europeans got married. Tied the knot. Put a ring on it. Which brings us to the question answered by this map: on which finger? The ring finger, of course. But on which hand? In the U.S., the consensus is: on the left. However, as this map shows, there is a remarkable variation in ring-wearing traditions across Europe.

According to this map, Europe is fairly evenly divided between countries where the wedding ring is worn on the left (in green), and those where the matrimonial band is worn on the right (in red).

Major left-wearing countries are the U.K., France, and Italy.

Russia, Germany, Poland, and Ukraine are the largest right-wearing countries.

Finally, Spain and the Netherlands have no uniform tradition, with left-wearers and right-wearers according to region or religion. 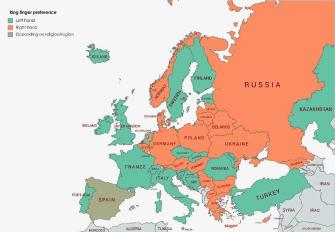 A map of wedding ring-wearing traditions in Europe. Credit: Reddit/MapPorn

Before we examine the difference, let’s pause a while to contemplate a phenomenon so uniform–the wedding ring goes on the finger next to the pinkie–that we’ve even named the digit after it.

Left, right, and center, you’ll read that wearing a ring as a visible sign of the wearer’s married status is a tradition that dates back to ancient Egypt. Not so, says Egyptologist Dr. Flora Anthony: “Wedding rings were not an ancient Egyptian tradition. We actually have no evidence of any ceremony, ritual, or artifact related to marriage from ancient Egypt. The lack of evidence is intriguing.”

The oft-repeated (but undocumented) story is that the Egyptians believed a ‘vein of love connected the pinkie’s neighbor straight to the heart – a belief that was taken over by the Greeks and Romans (who called it the vena amoris). That would explain the tradition of wearing the ring on the ‘ring finger’. (1)

That story, or at least the Egyptian part of it, is a myth, Dr. Anthony contends. It is likely that it merely reflects the desire to find an ancient origin for a tradition that is considered so primal. In the words of H.L. Mencken, the story is “neat, plausible, and wrong.”

Dr. Anthony does suggest a possible, albeit more tentative link: “The concept of the orobouros is from ancient Egypt. It’s a snake that eats its tail and is thus ring-shaped. As a concept, it relates to eternity. So you could say that the circle or the ring shape does carry notions of eternity, even in ancient Egypt.”

If you go back far enough, tradition becomes less… traditional. The ring finger wasn’t uniformly used for wearing the wedding ring. Some early Celtic peoples wore their wedding ring on the middle finger, while in 17th-century England it was not uncommon to wear it on the thumb.

Also non-traditional: men wearing wedding rings. In many cultures, only women wore wedding rings. In Germany, for example, the custom for both parties each to wear a ring only became general in the second half of the 19th century. Male wedding rings took off in the UK and other English-speaking countries only during (and because of) the First and Second World Wars. The men away on military duty started wearing rings to remind them of their wife at home.

So, even as weddings themselves are on a slow decline, the wearing of wedding rings has become a standardised aspect of the married state. Except for that difference between the left and right hand.

That difference is more difficult to explain, apparently quite resistant to standardisation and, as evidenced by the reaction generated by this map, also more subtle than the various shadings it proposes. 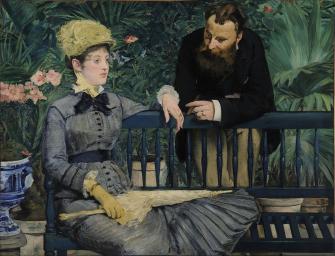 ​Mr and Mrs Guillemet, a 19th-century Parisian couple, wearing their wedding rings on the left hand, as is still the custom in France.Credit: Edouard Manet: ‘Dans la serre’ (1878-9) – Public Domain

Why wear the wedding ring left or right? The difference seems to be merely based on precedent – although some arguments can be found for either option.

In some European traditions, including many Orthodox ones, the wedding ring is worn on the left hand before marriage, then transferred to the right hand during the ceremony. In Turkey, it’s generally the other way around.

In others, a relatively plain engagement ring is worn on one hand before marriage, replaced by a more ornate wedding ring on the other hand after marriage. However, in the U.K. (and possibly elsewhere), some people ‘stack’ the rings, wearing the engagement ring over the wedding ring, both on the left ring finger.

As for the mixed countries: in Spain, the difference is regional, while in the Netherlands it is religious.

A few other countries should have been shaded as well, other commenters pointed out, at least Austria, Belgium, and Bosnia.

Other countries should be marked in the other color, some commenters with lived experience point out: Bulgaria and Georgia are left-handed countries, Turkey and Kazakhstan right-handed ones. Although one witness claims Turkish women wear their rings on the left, while their husbands wear theirs on the right. Poland does wear its wedding rings on the right, except if you’re a widow(er), in which case you wear your ring on the left to indicate your bereaved status.Who knew you could say so much by just where you wear your ring?

(1) Curiously, the ring finger is known as the ‘unnamed’ one in languages as diverse as Sanskrit (anamika), Chinese (wúmíng zhǐ), Finnish (nimetön sormi) and Russian (bezimyanniy palets), which may refer to ancient beliefs that it is a magical finger. However, the name ‘ring finger’ goes back at least until the Romans (digitus annularis). In German, because of its association with golden wedding bands, it is also called Goldfinger.

In terms of sheer productivity, “-gate” has no peer. Wikipedia’s list of -gates has over 260 entries.
Neuropsych

If love is an addiction, your first love is the first dose.
Videos

Reality is more distorted than we think.
▸
with
Big Think
Strange Maps

Esoteric evidence points to a ritual performed by Queen Elizabeth’s court magician John Dee.
Up Next
The Present

Carbon dating allows us to know exactly when ice was melted for drinking water in pre-Columbian America.