Volcanoes destroy, but also create. The same lava streaming out of Kilauea on Hawaii’s Big Island that has burned up over 600 homes so far has also poured itself hissing into the sea, solidifying into a new shoreline for almost a mile.

Overall, the month-long eruption has created about eight square miles of new lava fields, up to 20 feet thick. To whom do these alien-looking, slowly cooling new layers of territory belong? It depends on which side of the former shoreline they were created. 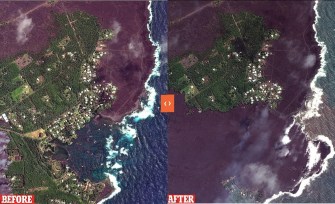 Aerial photos showing the ‘before’ and ‘after’ of Kapoho Bay, found here at the Daily Mail.

Green Lake, a.k.a. Ka Wai a Pele (1), which lay on the lava’s route towards the coast, disappeared in a mere 90 minutes. The water evaporated and its basin, up to 200 feet deep, was completely filled with molten rock. Hawaii’s largest freshwater lake is no more. Also, last week, the lava reached Kapoho Bay, well known for its tidal pools. It too is now filled up and gone.

Two former bodies of water, both filled up with lava in the same cataclysm. But: two different ownership principles at work.

Land (or lakes) covered by lava may radically change in appearance, but their ownership remains the same. So even if your home is now replaced by something that looks like the surface of the moon, the plot it stood on is still as much yours as before.

By definition, land created by lava didn’t belong to anyone before. So is this terra nullius that can be claimed by those micronation enthusiasts fast enough to plant their homemade flag on it (2)? Or are these new bits of land the natural extension of the former beachfront properties they now separate from the sea? 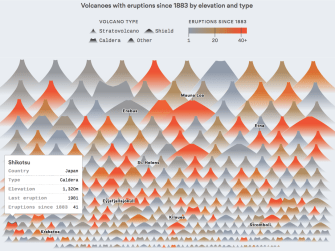 Which volcanoes have been the most active since 1883? See this clickable scorecard, found here at Axios.

As it turns out: neither. New lava-land belongs to the state. The state of Hawaii, that is, not the U.S. federal government. How come we’re so sure? The issue has come up before and has been decided by the Hawaii Supreme Court.

The extra land formed by the 1955 eruption bordered the property of Maurice and Molly Zimring. They assumed it was theirs, literally by extension. The Zimrings landscaped their new land, planted trees and even paid property taxes on it. But after the 1960 eruption, the state ordered them off it. The Zimrings sued, winning the initial case but losing the appeal before Hawaii’s Supreme Court in 1977. The court ruled that so-called lava extensions were meant for “the use and enjoyment of all the people” (i.e. the state) rather to than serve as compensation for the few random lava victims lucky enough to adjoin such bits of ‘new land’. 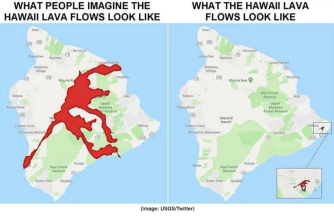 The images out of Hawaii may be apocalyptic, but it’s not like the whole of the Big Island is burning up. Map found here at Hawaii News Now.

The precedent was later used to declare unlawful the pavilion someone built on a lava extension in the southeast of Big Island.

Kilauea’s current eruption is thought to be its most destructive episode in recent history. When the situation cools down, literally, it will be time to redraw the Big Island’s shoreline. However much territory Hawaii stands to gain from this latest volcanic outburst is as yet unclear. Overall, however, Uncle Sam still loses out, as Louisiana also urgently needs to redraw its shoreline maps, amounting to a bigger loss than the gain made by Hawaii (3).

(1) Ironically, Green Lake itself is volcanic in origin: it was formed approximately 400 years ago in the Green Mountain crater. According to Hawaiian folklore, the lake was visited by Madame Pele, the goddess of volcanoes, when she first visited Hawaii. Some residents feel the lake’s disappearance marks Pele’s return.

Heavy drinking increases the risk of Alzheimer’s, and now we know why

Drinking heavily over a long period of time has been known to cause early onset Alzheimer’s. But the forces behind this phenomenon have been a mystery, until now.