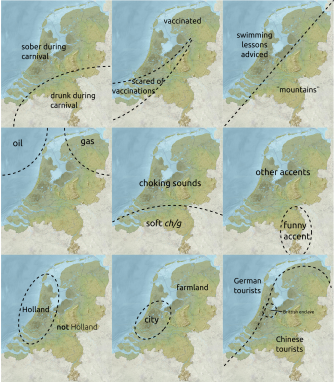 Diversity is not contingent on size. You can be a small country, and still be very heterogenous. Holland is a case in point. As these maps demonstrate, there are at least nine ways to slice the pint-sized polity into two distinct parts. In fact, as shown by one of them, the country is so diverse that the geographical term Holland doesn’t even apply to most of its territory. But let’s start at the beginning: carnival! 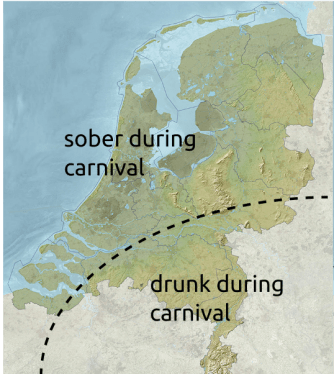 Rio de Janeiro, New Orleans, Cologne and the south of the Netherlands are all famous for their carnival – an annual celebration of exuberance and excess prior to the penance and self-denial of Lent. What binds those far-flung parts of the world together is their catholic heritage. The Netherlands south of the Big Rivers – Meuse and Rhine, which can be seen slicing the country in two latitudinally on the maps – is generally catholic, the north is mostly protestant. Although neither confession is as strictly observed as a few generations ago, the difference in attitudes is still observable in some vestigial cultural differences – such as the celebration of carnival. 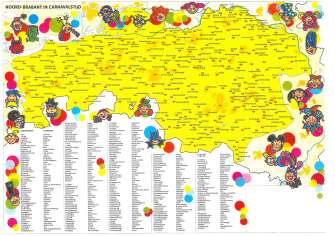 The catholic part of the Netherlands takes the festival so seriously that its cities and towns change names during the carnival season. In the province of North Brabant – which, counterintuitively, is in the south of the country – the city of Den Bosch becomes Oeteldonk, the town of Vlijmen turns into Knotwilgendam, and so on. 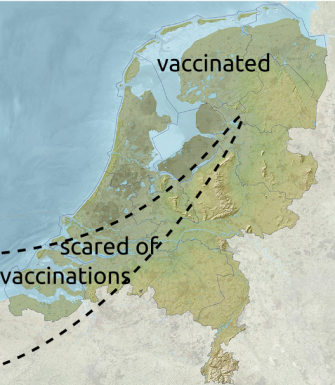 The Netherlands have a well-earned reputation as one of the most progressive countries on earth. Hence the relaxed attitude towards cannabis, for example, or the legal framework for euthanasia. But unbeknownst to most outsiders, the country has its own Bible Belt, a region dominated by a strict interpretation of the protestant faith. The ‘capital’ of this region is Staphorst, a town in the east of the Netherlands that has one of the country’s highest church attendance rates, as well as one of Europe’s highest birth rates – but also one of the lowest vaccination rates. A significant number of conservatively religious people refuse vaccinations on the grounds that it interferes with God’s plan (1). 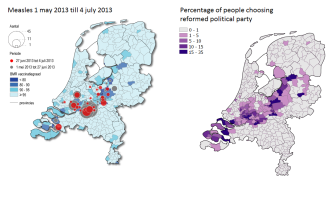 In fact, as these maps show, there is a remarkable overlap between the occurrence of measles during an outbreak in mid-2013 and the electoral strongholds of the SGP, a political party explicitly associated with conservative Protestantism. 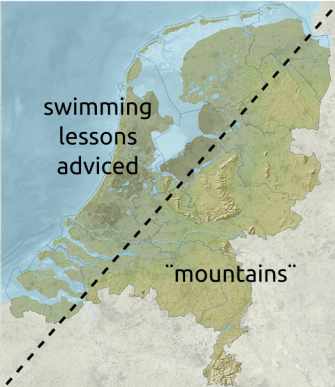 As the country’s name indicates, the Netherlands are a low-lying country. About a quarter of its area, and a fifth of its population is located below sea level. That would be to the west of this line. But even the ‘dry’ land to the east is fairly low-lying. Only about 50% of the national territory exceeds an elevation of one metre (about three feet) above sea level. It is telling that the highest point in the Netherlands is at its very southern tip, in Vaals (2). And that the so-called Vaalserberg, 322.7 m (1,059 ft) above sea level, isn’t even entirely within the Netherlands: its top forms an international tripoint with Belgium and Germany – and at one time, a quadripoint with the geopolitical anomaly of Neutral Moresnet (3). Still, it’s better to be a low country than a below country, in case the dykes break. 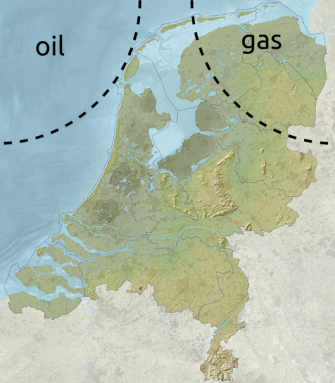 Holland/the Netherlands (we’ll get to that) is a country of windmills and wooden shoes, cheese and tulips. And oil and gas? Yes, the Dutch have their own treasure trove of hydrocarbons up north, in two distinct zones: a large bubble of natural gas underneath the province of Groningen, and oil in its part of the North Sea. The dichotomy between oil and gas is not as neat as on this map, however. 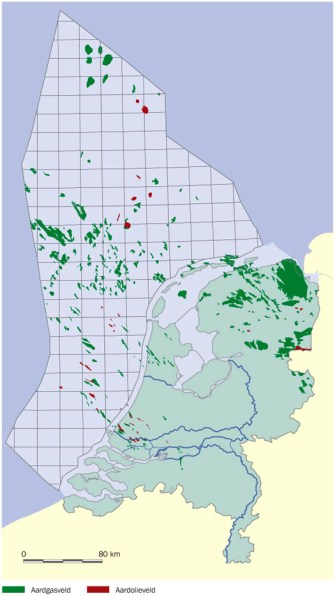 This map is a more precise rendition of the Dutch reserves of oil (in red) and gas (in green). 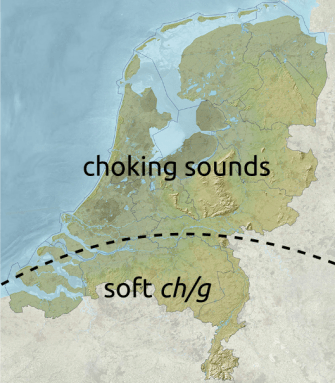 “He had been thinking of how landscape moulds a language. It was impossible to imagine these hills giving forth anything but the soft syllables of Irish, just as only certain forms of German could be spoken on the high crags of Europe; or Dutch in the muddy, guttural, phlegmish lowlands.” – Alexander McCall Smith

“Dutch is not so much a language as an ailment of the throat.” – John Green

“[ Dutch poetry] is too smooth and blubbery; it reads like butter-milk gurgling from a jug.” – Mark Twain

“Economics is like the Dutch language – I’m told it makes sense, but I have my doubts.” – John Oliver

“A donkey appears to me like a horse translated into Dutch.” – Georg Lichtenberg

The Dutch language gets a bad press for being an especially guttural language – all spit and gurgles, but that is true only in the northern part of the country. The south pronounces its g-sounds much softer, a bit like the Dutch-speaking Belgians do.

The Netherlands has one of the weirdest territorial appendages in Europe – its southern province of Limburg, at its narrowest a corridor less than three miles wide between Germany and the Belgian province of Limburg (4). Geographical eccentricity is compounded by linguistic divergence: the Limburg dialect is a close cousin to dialects spoken on the other side of the German border, and is often incomprehensible to other Dutch (and Belgians). 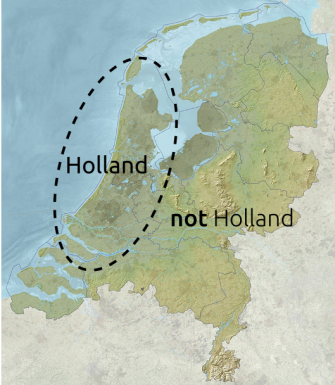 Ah, here’s the rub. Holland is the most populated and culturally dominant part of the Netherlands, hence the conflation of one with the other. But in fact, the geographical area comprised by Holland is relatively small, and only covers two of the Netherlands’ 12 provinces: North Holland and South Holland. Incidentally, there is no link between Nether- and Hol-, as the second prefix derives not from hollow or anything like it, but from holt (‘wood’), as in ‘wooded country’ (Holt-land). Netherlanders outside Holland have been known to get miffed, upset or even angry if one refers to them as Hollanders. Nevertheless, Holland is used informally as a synonym for the whole country in the Netherlands itself, and has even achieved formal status abroad – the official term for the Netherlands in Filipino is Olanda, in Japanese Oranda, in Polish Holandia, etcetera. 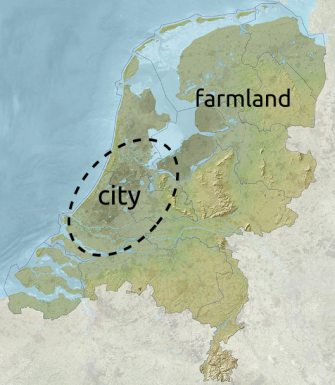 As mentioned, Holland is culturally dominant, and the fact that it is the most urbanised part of the country is a major factor. The so-called Randstad contains four of the country’s biggest cities – Amsterdam, Rotterdam, The Hague and Utrecht and counts over 7 million inhabitants, almost half the total for the whole country. The Randstad contains the Port of Rotterdam, and Amsterdam Airport, both among the world’s busiest in each category. The name for the conurbation was reportedly coined by Albert Plesman, founder of KLM, the Dutch national carrier. Flying over the area in the west of the country, he noticed how all the big cities were at the edge (rand) of a large agricultural/rural region. 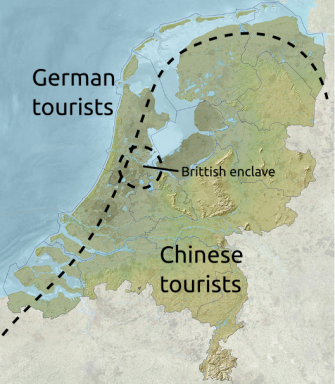 The last map is perhaps the most debatable; there are German tourists all over the country, not least in the cities closest to the German border (*). The English preference for the attractions of Amsterdam, forbidden at home and habitually enjoyed in the shape of a stag night excursion, is supported more readily by repeatable observation. The Chinese preference for the Dutch hinterland may seem a bit puzzling, but it does exist, in at least one town. Giethoorn, a picturesque village in Overijssel province often referred to as the Venice of the Netherlands because of its many canals, receives as many as 200,000 Chinese visitors each year. Fans of Holland in the Far East can save themselves a long trip by hopping over to Huis ten Bosch in Nagasaki, a Dutch-themed park that is testament to Japan’s ongoing fascination with the Netherlands.

*: Update 13 July 2022: Fred de Vries, who going by his name it is safe to assume is Dutch, says German tourists “do not swarm all over the country”. I guess that assertion hinges on what your definition of a “swarm” is. Nevertheless, his statement is in line with the map, and he offers a valid explanation: “Since Germany doesn’t have a long coastline, Germans who visit the Netherlands flock to the coastal areas.” He adds a curious cultural particularity of these coastal tourists: “The Germans are immediately recognised by the Dutch, because they always dig a hole in the sand to protect them from the wind. They then also claim that that part of the beach is theirs.”

(1)To be fair: religious congregations were among the first to spread the practice of immunisation from the early 19th century onwards, and for any modern-day faith group opposing vaccination on religious grounds, there are several more mandating it, also on religious rounds.

(2)Well, that is not entirely true. Since the integration of Dutch overseas territories into the Netherlands proper in 2010, the highest peak in the country is Mount Scenery (887 m, 2,910 ft) on the island of Saba, in the Caribbean.

(3)For a very brief time also known as Amikejo, the world’s first (and only) Esperanto state – see #41.

(4)Both provinces used to form one territorial unit – see #90.

How many fundamental constants does it take to define our Universe?

And even with them all in place, what do we still not know?“The joy of life consists in the exercise of one’s energies, continual growth, constant change, the enjoyment of every […]