Back when Australia thought it was just another British Isle, accidentally misplaced in the South Pacific, the country regularly had nightmares of an Asian invasion – with the Indians, Chinese and Japanese as most likely perpetrators (see #380 and #748).

Around the time of the First World War, a geographically more improbable source of invasion anxiety was grafted on this pre-existing paranoia – fear of a Teutonic takeover. This undated poster shows a map of Australia with its name struck through and replaced by New Germany.

After the takeover, the main cities Down Under – sorry, Ganz Unten – would also receive more appropriate appellations, named for the most part after the German military top brass in the War. 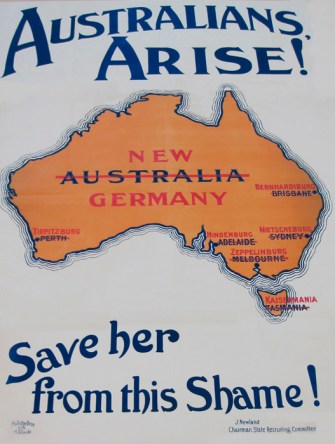 Even if the Central Powers had defeated the Allies, a German invasion of Australia would have been extremely far-fetched. The First World War was one of attrition, and the weakened Empire would probably have concentrated on controlling as much of Europe as it could muster. What had remained of the Imperial Navy would have been deemed more useful closer to home.

So why monger such an unlikely panic? The key to the poster is below the map: it was produced by Halliday Brothers Lithographers in Adelaide for the State Recruiting Committee in South Australia, the organisation tasked with getting as many able-bodied Australians as possible to join the fight against the Kaiser.

But to be fair, Imperial Germany did have an outpost fairly close to Australia. After the War, the Treaty of Versailles would strip Germany of its colonial empire, which was mainly in Africa (5), but also included two Pacific holdings: German Samoa and German New Guinea (6).

Not that either posed any real threat. Shortly after the outbreak of the war, both colonies were swiftly overrun, by New Zealand and Australian forces respectively. Ironically, it was the Australians who did the renaming: the island of Neu-Mecklenburg became New Ireland, its neighbour Neu-Pommern was rechristened New Britain. Could it have been this rebranding that inspired the recruitment poster depicted above?

A third, smaller island was allowed to keep its German name and is today still called New Hanover. The archipelago, as well as the neighbouring sea, also retains its link to Germany’s short colonial rule: they are named the Bismarck Archipelago and the Bismarck Sea. 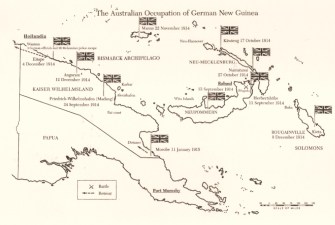 The Australian redesignation of the islands was not necessarily a sign of their obsequiousness towards Britain, but actually a reversion to an earlier nomenclature. William Dampier had visited and named Nova Britannia in 1700, and in 1767, when Philip Carteret discovered that one part of the presumed island was in fact separate, gave it the name Nova Hibernia.

New Britain and New Ireland, even in their earlier incarnation, were two late examples of a centuries-old trend: European navigators naming parts of the world after their home countries, as a means of appropriation and a prelude to conquest. Hence New England (7), Nieuw Nederland (8), Nouvelle France (9) and Nueva España (10).

The Germans tried their hand at colonising again during the Nazi era, but since the rest of the world had already been colonised, had to content themselves with a piece of Antarctica, which they called Neuschwabenland (see #88). Needless to say, that venture did not prove to be a success (although some conspiracy theorists affirm the existence of a Nazi base near the South Pole, complete with UFOs).

The world does count a few New Germanies: towns in Minnesota, KwaZulu-Natal, and Nova Scotia. Australia kept its name, and didn’t have to revert to its earlier one – New Holland. 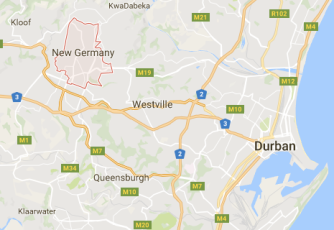 The New Germany map found here via @simongerman600, the Twitter feed of Simon Kuestenmacher – a German cartographer in Australia. The German New Guinea map found here on A Future Unlived, a history of the internment of German Enemy Aliens on Torrens Island in South Australia during 1914-1924. Map of New Germany in KwaZulu-Natal via Google Maps.

(1) Since the suffix -burg (originally meaning castle, often used to denote a town or city) is included in the family name, the new city name really should be Hindenburgburg.

(2) Ferdinand’s granddaughter Eva once threatened to sue the rock band Led Zeppelin over the unauthorised use of the family name.

(3) Correct spelling: Nietzsche. Possibly of Slavic origin. The philosopher claimed he descended from a line of Polish nobles.

(5) German East Africa (present-day Tanzania, minus Zanzibar, plus Rwanda, Burundi and the Kionga Triangle); German Southwest Africa (present-day Namibia, minus Walvis Bay, plus a small part south of the Caprivi Strip, in present-day Botswana); German Cameroon (split into a French colony, which forms the larger part of present-day Cameroon, and British Cameroons, which was later divided between Nigeria and Cameroon itself); and Togoland (again split into a French colony, which today is Togo, and a British part, which joined Ghana).

(6) Consisting of Kaiser-Wilhelms-Land, the northeastern part of New Guinea, and several nearby island groups, today divided over Papua New Guinea, Micronesia, the Marshall Islands, Nauru, the Mariana Islands and Palau.

(8) See #243 for an allohistorical version of New Netherlands, surviving to our times.

(9) At its greatest extent, a fairly big chunk of North America.

(10) A lot bigger than present-day Mexico.

The science fiction dream of a traversable wormhole is no closer to reality, despite a quantum computer’s suggestive simulation.
Up Next

How Self-Driving Cars Will Transform Urban Living for the Better

10 million cars with autonomous features will be on the road by 2020. But they won’t just change the way we get around, they’ll transform our cities and our lifestyle preferences, from the morning commute to the suburbs we choose to live in.