Honoring Scotland’s hospitality to Polish soldiers during WWII, the ‘Great Polish Map of Scotland’ is said to be the biggest solid-terrain model map of the world. And it is the only map to have received Listed Building status in the U.K.

Despite those two claims to fame, the giant concrete model of Scotland had recently fallen into disrepair. Only last week did Fiona Hyslop, culture secretary in the Scottish government, officially reopen the restored map, in the grounds of the Barony Castle Hotel in Eddleston, in the Scottish Borders region.

The story starts in the darkest hour of WWII. After the Fall of France in May 1940, units of the Polish army that had found refuge in the U.K. were stationed in Scotland. The Poles were tasked with defending a stretch of the Scottish east coast against a possible German invasion from Nazi-occupied Norway. 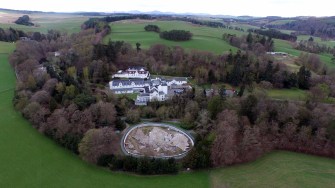 Map and hotel in their topographic context.

In 1942, the Hotel Black Barony was requisitioned to train Polish officers. Under general Stanislaw Maczek, one of Poland’s most experienced and talented generals (1), Polish troops trained in Scotland for their part in the D-Day landing in Normandy in 1944.

Commanded by Maczek, the Polish 1st Armoured Division trapped and destroyed 14 German Wehrmacht and SS divisions at the Battle of Falaise (12-21 August 1944), and would later go on to spearhead the Allied drive across France, Belgium, the Netherlands, and Germany.

After WWII, Poland fell into the Soviet orbit. Many Polish soldiers refused to return to their now communist-run homeland. Maczek—stripped of his Polish citizenship—was one of those choosing to settle in Scotland, as did Jan Tomasik, formerly a sergeant in Macek’s division.

Like all Polish war veterans in the U.K., Maczek and Tomasik were denied war pensions. Tomasik went into the hotel business and employed his old wartime commander as a bartender in his hotel in Marchmont, Edinburgh. Witnesses state that Maczek also worked a driving instructor, as ‘White Eagle’, the name of pre-war Poland’s highest military honor (2).

Close inspection prior to renovation.

In 1968, Tomasik bought the Hotel Black Barony, now the Barony Castle Hotel, where he provided Maczek and his family with a room to enjoy their summer holidays. Spurred by the hotel’s Polish military history, it’s likely that the two men, by now fast friends, together dreamed up the concept of the map.

It seems possible that Tomasik was inspired by a large outline map of Poland drawn by Polish soldiers at Douglas in Lanarkshire in 1940, when Tomasik was stationed there. Another, more certain source of inspiration was the large-scale map of Belgium Tomasik saw at the Brussels World’s Fair of 1958.

The map was to be more than an attraction for Tomasik’s hotel guests. He wanted it to be a sight-seeing destination on its own, and his “gift to the Scottish people” as his thanks for their hospitality to Polish soldiers during WWII. His plan to invite Queen Elizabeth, consort of George VI, to officially open the map never came to pass.

Work on the Mapa Szkocji started in 1974. Designed to a scale of 1:10,000 by cartographers from Krakow University (3), it was constructed over six consecutive summers and finished in 1979. For visual effect, mountain heights were exaggerated by a factor of five, as was standard for British military terrain maps.

But the Great Map started to decay soon after Tomasik sold the hotel in 1985. In 2010, Mapa Scotland was formed to preserve the unique memorial. The charity began to acquire funding to restore the sculpture, as well as securing a Category B listing from Historic Scotland, making it the only map to have received listed-building status in the U.K. 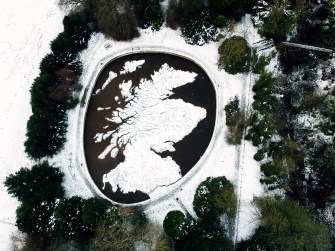 The Great Polish Map of Scotland is significant in a global sense: its surface is 2.8 times larger (4) than that of the solid-terrain model of British Columbia in the Crystal Garden in Victoria, B.C. That model also claims to be the world’s largest terrain relief model but measures only 40 by 74 feet (12 x 23 m).

And the restored Mapa is not the only recognition the Polish are getting for their wartime efforts in Scotland. Plans are underway to honor General Maczek with a life-size bronze statue in Edinburgh, his adopted hometown.

(1) Maczek commanded the only Polish unit not to have lost a single battle during the German invasion of September 1939. After the defeat of Poland, he made it to France, where he prepared a detailed report on German Blitzkrieg tactics. When the Germans captured the French general staff HQ, they found his report, unopened.

(2) Maczek was finally awarded the Order of the White Eagle by the now post-communist government of Poland in 1994, a few months before his death.

(3) Despite the Cold War, relations between Scottish and Polish academia were good.

What Astronomers Wish Everyone Knew About Dark Matter And Dark Energy

Among the general public, people compare it to the aether, phlogiston, or epicycles. Yet almost all astronomers are certain: dark matter and dark energy exist. Here’s why.If you go by what’s […]