The Galapagos Islands are among the most fascinating places on Earth. Due to their isolated location, unique geography, and good luck the islands have long been a refuge for some of the most unique lifeforms there are. The tremendous diversity of life on the islands has been noted since the day Europeans arrived, and famously inspired Charles Darwin to devise his theory of evolution.

The islands are most famous for their plethora of animal species. The very name, Galapagos, means “giant tortoise,” and the tortoises are just the tip of the iceberg. New plant and animal species continue to be discovered on the islands even today.

Here, we’ll dive into some of the most fascinating discoveries made on the islands.

The most significant discoveries on the islands were made as part of the voyage of the HMS Beagle in 1835 when a young Charles Darwin landed there. As part of his job as the ship’s naturalist, he pressed hundreds of plants, collected animals, dug up fossils, and observed anything he couldn’t capture.

New species and their development

After departing the islands, he noticed that the mockingbirds from each island differed ever so slightly from one another but thought little of it. It was only after the ornithologist John Gould explained that the birds were mostly odd-looking finches and that they comprised 13 species that Darwin realized that new species evolve to fit different environmental niches.

Darwin was also able to see that the plants on the islands were unable to get there without help, inspiring him to later experiment with seeds he found in bird droppings in an attempt to see if digested seeds would still germinate. They can. 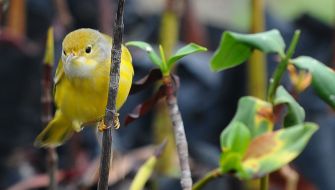 A Pinzon bird is seen at a nursery of endemic plants, which are in risk of extinction, at Cerro Colorado, in the southwest of Puerto Baquerizo Moreno, San Cristobal Island, Galapagos, Ecuador on June 4, 2013. National park rangers are participating in an endemic plant reforestation program to restore the ecosystem of the island. (RODRIGO BUENDIA/AFP/Getty Images)

Darwin’s observations of how different bird species can be across islands which were close together lead to the greatest idea in the history of biology: evolution by means of natural selection. The theistic biologist Theodosius Dobzhansky praised it by writing a paper titled, “Nothing in Biology Makes Sense Except in the Light of Evolution.” It’s a discovery we owe in large part to the biodiversity of the Galapagos.

The later publication of On the Origin of Species caused a stampede of naturalists looking to confirm Darwin’s ideas. Ever diligent, the naturalists continued to find new species as they pillaged the island of its wildlife to fill museums.

Recently, the radical effects of El Nino on the island’s weather have caused such disruptions to the animals living there that the principle of natural selection can be seen in action; though it will still take another 200 years for new species to evolve. 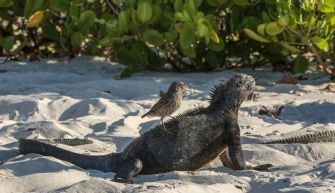 During the droughts of the late seventies and the El Nino of 1982-83, the fortunes of the finches of the Galapagos shifted rapidly. Medium ground finches, similar to the small ground finch above, had measurable increases in beak size during the drought and similar decreases during the El Nino in order to better grab whatever seeds were plentiful. (PABLO COZZAGLIO/AFP/Getty Images)

No fear in Eden

The lack of large predators on the island shows us what happens when large herbivores are left to their own devices. Without a need to fear for their lives, many of the animals have become quite tranquil and can be approached and even handled without protest. Charles Darwin recorded that he was able to lift a teacup a bird was perched on without the bird so much as moving. Darwin, in the name of science, also sat on tortoises and pulled iguana tails to test the odd fearlessness of animals he came across. 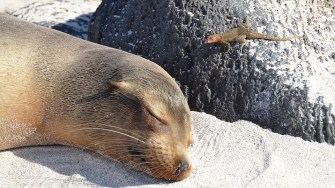 Imagine the pranks Darwin would have played on these two. (Public domain)

There were other discoveries, too

There have also been many major discoveries outside of Darwin’s trip there.

The accidental benefits of whaling

The islands were long used as a station for whaling ships. This influx of ships towards the islands led to several interesting discoveries. In 1813 the USS Essex came to the island after destroying the British whaling fleet in the area. The Captain of the ship recorded that the tortoises of each island had differently shaped shells, a detail that would later interest Darwin.

The rich whaling around the islands also lead to the doomed voyage of another ship also named Essex, which inspired the novel Moby Dick.

How to protect it

More recently, the island has become a testing ground for how to remove invasive plants and animals, as the caretakers of the Galapagos National Park seek to protect the flora and fauna that have given us a better understanding of the world.

One of the reasons that the biology of the Galapagos is so unique is the geology of the area. The islands are volcanic in nature and were never attached to any other landmass. All life on the islands had to fly, swim, or be carried there. This isolation between the mainland and each other helped promote the specialization of animal life that we see today.

The island’s volcanic history also allowed for the discovery of how volcanic tuff, a soft rock made from ash, is formed. Charles Darwin also made this discovery. Not to be thought of as lazy, he also found time on the same voyage to determine how coral reefs formed.

Last but not least, the only penguins that live in the northern hemisphere were discovered there. The Galapagos penguin is a small, adorable bird that has evolved to fit its tropical environment. Unlike Antarctic penguins which have evolved to stay warm, this one has features to help it stay cool.

And thus the Galapagos remind us now as they did in 1835 that if life can find a niche, it will find a way to thrive.

Improving Your Hiring Process to Feed Your Leadership Pipeline

The New York Post reports that CEO turnover is the highest it has been in eight years. However, according to the Center for Creative Leadership (CCL), executive churn is a […]