12 new moons have been discovered orbiting the planet Jupiter. They were not known until discovered via the 6.5-meter Magellan Telescopes. The data captured therein took a year to study, but was just confirmed.

“It takes several observations to confirm an object actually orbits around Jupiter. So, the whole process took a year,” said Gareth Williams of the International Astronomical Union’s Minor Planet Center. 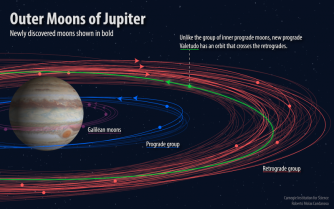 Ever since Galileo discovered the four moons that we’ve known of since the year 1610, we’ve observed that they circle Jupiter in counterclockwise fashion as seen in the video below—they actually orbit the same direction as the planet itself spins, which is known as prograde orbit. Two new ones have now been added to those original four, going the same direction. Because these all have similar orbital distances and angles of inclination around the planet Jupiter, they’re thought by scientists to be fragments of a larger moon that was broken apart, likely by another orbiting moon going the opposite direction.

Of the remaining 10 moons orbiting farther out, nine of them are orbiting in retrograde, or clockwise orbit, as seen in the below video. In other words, the opposite direction from that of the planet’s spin.

The final moon, proposed to be called Valetudo after the Roman god Jupiter’s great-granddaughter, is orbiting in a prograde fashion which means it’s orbiting in a reverse direction from the nine other new moons that are near it. Valetudo’s orbit crosses that of some of the nine newly discovered retrograde-orbit moons and will likely crash into one or more of them, eventually. The rogue moon is only one kilometer in size, which indicates it once was much larger and has possibly collided with others in the past.

“It is as if the moon is traveling the wrong way down a crowded highway. This is an unstable situation,” Scott S. Sheppard, who helped lead the team, told The Independent. “Head-on collisions would quickly break apart and grind the objects down to dust.”

All of the new moons are less than two miles (3.2 km) wide, which explains why it’s been so difficult to spot them until much more sensitive telescope equipment was deployed.

The discovery brings the total number of objects orbiting the planet, both prograde and retrograde, to 79—the most of any planet in our solar system.

Giant insects once covered Earth. Where did they go?

Believe it or not, insects today are really tiny. How did pre-historic insects get so colossal, and why have they now shrunk in size?