Over the course of its 4.5 billion years, Earth has gone through some pretty significant changes. Insectophobes can celebrate the fact that humanity’s time on this planet mercifully came a full 360 million years after the period when Earth was covered in Meganeura, predatory dragonflies with two-foot-long wingspans. At the same time, the “lung scorpion,” a scorpion the size of a skateboard, scurried around beneath these giant dragonflies, accompanied by the eight-foot-long Arthropleura millipede. This terrible time on planet Earth is known as the Carboniferous period.

During the Carboniferous, numerous new insect families developed on Earth, with many insect species growing to incredible sizes. Fortunately, there’s a distinct lack of eight-foot-long millipedes today. The reasons why these critters could exist at all and why they are gone now is still being debated by scientists, but there are a few likely factors worth mentioning.

How big can bugs get?

Bugs today are minuscule compared to the Carboniferous period, likely due to the way that insects breathe and how that system fails to hold up at large scales. 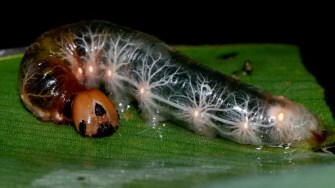 This transparent Brazilian skipper caterpillar shows the tracheal system. The dot-like spiracles are the valves on the surface that let oxygen into the trachea. (Photo: Jim Cordoba, Enio Cano via askentomologists.com)

Around 300 million years ago, however, Earth was saturated with oxygen. Today’s atmosphere is 21% oxygen, while the Carboniferous period had an atmosphere that was 35% oxygen. With this overabundance, insects’ respiratory systems could support larger bodies than what we think of as typical. Being big is, generally, a good thing: large animals stand to win in a fight, can store more energy for when resources are scarce, and retain heat more efficiently.

For insects, there needed to be more oxygen in the air for this to happen. The extra oxygen didn’t suddenly appear, however; this change in the atmosphere can be attributed to the arrival of the first trees on the planet.

Prior to the Carboniferous period, trees didn’t exist. During this time, the first things that could properly be recognized as trees appeared. These were unlike the trees we know today—they were more like massive ferns with shallow roots that made them prone to falling over. They grew throughout the swamps that covered most of the planet during this period. 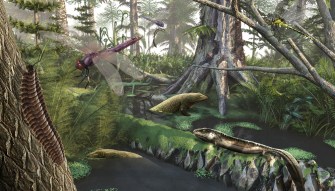 However, ancient trees and modern trees do share a crucial characteristic. They both are made of a cellulose and lignin composite—wood. Wood also happens to be an excellent store of carbon. As these trees grew taller and taller to compete for sunlight, they sucked more and more carbon out of the atmosphere and exchanged it for oxygen, fundamentally changing the composition of the atmosphere.

The same activity occurs today, of course. But modern trees decompose and release that carbon back into the environment. During the Carboniferous period, this didn’t happen. Wood was a novel material on the planet: the fungi and microbes capable of digesting it didn’t exist yet. When these trees fell over and died, they stayed in place. Tree trunks slowly accumulated over the swampy Earth, storing away much of the carbon in the atmosphere. This is where the name of this period of time comes from: Carboniferous is Latin for coal-bearing. In fact, as layers of dead trees piled on top of each other, they were gradually compressed into a massive layer of coal, which is where we get most of the coal we use today.

All of this paints a very surreal picture of ancient Earth. It would have been a moist, swampy place covered in endless fields of timber and giant ferns, crawling with Lovecraftian insects the size of your arm or larger.

Today, you might consider an insect “big” if it’s the length of your finger. About 150 million years ago, bugs suddenly began to shrink back down. This also coincides nicely with the appearance of the first birds, whose prey of choice would have been the ubiquitous, slow-moving and protein-rich bugs. Under assault from flying predators, being large was no longer an advantage, and insect sizes were reduced to a mere still-way-too-big rather than gargantuan.

By about 260 million years ago, fungi and microbial life evolved to digest wood. The trees that had not yet been converted into coal were quickly digested, and their carbon was released back into the atmosphere. This leveled out the ratio of carbon to oxygen in the air. Without favorable atmospheric conditions and with the pressures of predation, insects could no longer afford to maintain their massive sizes and gradually shrank to the more manageable sizes we are familiar with.

Today, our atmosphere is undergoing an opposite change to the Carboniferous period: the amount of carbon dioxide in the air is increasing. Intuitively, it might seem like that would mean fewer and smaller insects. Before any insectophobes decide to go for a joy ride in their trucks, though, we don’t really know what precise effect this will have on insect populations. Some research suggests it may even indirectly increase certain insect populations. Ultimately, creepy crawlies are here to stay.

Chicago may become one of the first U.S. cities to implement a universal basic income program

A Chicago lawmaker says UBI is not only a way to ensure people still get paid as automation displaces their jobs, but that it’s also a safeguard against the inevitable sociopolitical strife that would follow.