In 2015, Philip Mullaly was walking on the beach near Victoria, Australia, in a hotbed of fossil finds known as Jan Juc, when he came across what looked like a serrated blade stuck into a boulder.

After prying it out with his car keys, he realized what he had; a shark’s tooth, about the size of his palm. 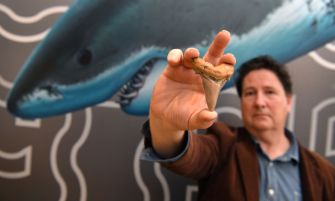 “I was walking along the beach looking for fossils, turned and saw this shining glint in a boulder and saw a quarter of the tooth exposed. I was immediately excited, it was just perfect and I knew it was an important find that needed to be shared with people,” recounts Mr. Mullaly.

Museums Victoria was his next call; it eventually sent out a team to excavate the area, and several more 3-inch (9cm) teeth showed up right in the same spot, indicating the shark had died right there, 25 million years ago.

The museum has released its study of the finds this week, and it has confirmed that these are from a great jagged narrow-toothed shark, or Carcharocles angustidens, a 30-foot shark that patrolled the waters off of Australia 25 million years ago. 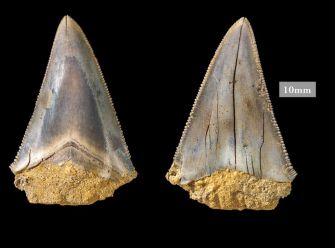 In all, 40 teeth were found there, several of them from the species of shark known as the sixgill shark, or Hexanchus. What likely happened is that as the narrow-toothed shark died in the waters off of Jan Juc, the sixgill sharks descended upon the remains and had a feast, leaving some teeth behind. 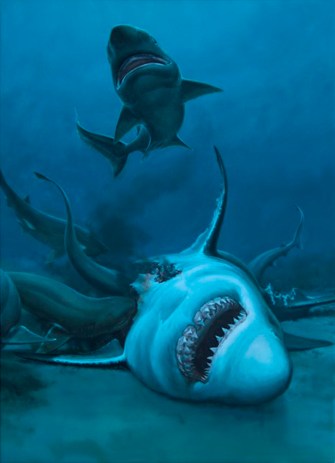 A schoolteacher and self-professed fossil hunter, Mullally has collected over 100 fossils, but never anything as old or significant as these.

“If you think about how long we’ve been looking for fossils around the world as a civilization—which is maybe 200 years—in (that time) we have found just three (sets of) fossils of this kind on the entire planet, and this most recent find from Australia is one of those three,” Fitzgerald told CNN.

The teeth will be on display at the museum until October.

The lovely Perseids’ comet could end life on Earth

The Swift-Tuttle comet is the source of the lovely Perseid meteor shower each August. It’s also getting closer and closer, making it “the single most dangerous object known to humanity.”