When Michael Beasley and Ignacio Trujillo of Instituto de Astrofísica de Canarias wrote a proposal meant to get them some observation time on the Hubble Space Telescope, they had a pretty good idea of what they’d see: a “relic galaxy” largely unchanged from the time it formed. Such pristine exemplars of the deep past are quite rare, estimated to consist of only about one in a thousand galaxies. The two thought they had a good candidate in the Perseid cluster’s NGC 1277, and it turns out they were right. 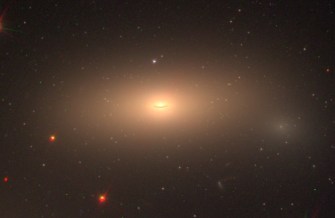 How the relic was spotted

The scientists were tipped off by the relative redness of NGC 1277’s globular clusters, which are groups of stars. These typically come in two colors. Red globular clusters are formed at a galaxy’s birth, are nearer the center of the galaxy, and have higher concentrations of helium. Blue globular clusters are the bits of smaller galaxies that have been absorbed by the larger one over time. The fact that NGC 1277 has so little in the way of blue clusters suggests that it’s remained essentially unchanged from its initial state. Our own Milky Way has a mix of red and blue globular clusters resulting from our ongoing cannibalization of other galaxies we encounter as we move through space.

A major peek at the past

NGC 1277 offers scientists an extraordinary opportunity to learn more about the nature of galaxies when they’re young, even if NGC 1277 itself is 10 billion years old. As NASA puts it, the galaxy’s in a state of “arrested development.” “I’ve been studying globular clusters in galaxies for a long time, and this is the first time I’ve ever seen this,” says Beasley, noting, “this is the first time a galaxy so massive has been observed with so few blue globular clusters.” It’s also (relatively) nearby—about 240 million light years away—making it an even more valuable find. “We can explore such original galaxies in full detail and probe the conditions of the early universe,” says Trujillo.

Right in the neighborhood

NGC 1277 is located in the Perseid cluster, which contains more than a thousand galaxies, some no doubt smaller than NGC 1277, but scientists think that NGC 1277 is simply moving too fast at two million miles per hour to absorb any galaxies it’s racing through. It’s only about a quarter the size of our own galaxy but has twice as many stars, so there’s plenty to look at.

Subscribe for counterintuitive, surprising, and impactful stories delivered to your inbox every Thursday
Here’s how to get to NGC 1277. (NASA Video)

Beasley and Trujillo have identified 10 other possible relic galaxies in addition to NGC 1277. With the upcoming launch of the James Webb Space Telescope in 2019, they expect to be able to get a closer look at their find and be able to track the ways its globular clusters move. They also hope to be able to figure out the amount of dark matter the galaxy contains.