Caffeine is the world’s most popular psychostimulant. In the United States, more than 90 percent of adults regularly consume caffeine and the average ‘user’ takes in about 300 milligrams per day, the equivalent of 3 cups of coffee.

Beverages infused with caffeine are by far the most common way the chemical is administered. As a mild stimulant, caffeine is prized for its effects on cognition, attention and alertness. Drinking coffee, tea or soda is an essential and acceptable part of the day for many adults while other psychostimulants—like amphetamines and cocaine—remain highly controlled.

One difference between illicit stimulants and coffee is the effect they have on the brain. While more controlled psychostimulants facilitate a rush of blood to the whole brain, caffeine actually restricts blood flow overall.

A new study published in Nature’s Scientific Reports looks at this counterintuitive fact and explains caffeine’s beneficial effect by way of ‘resting brain entropy’, or BEN. Despite decreasing blood flow to the brain, caffeine leaves individual regions more stimulated. The stimulating effects are uneven, however, creating a chaotic balance of energy when the stimulant is in full force. The greater unevenness in stimulation throughout the brain, the higher the entropy. 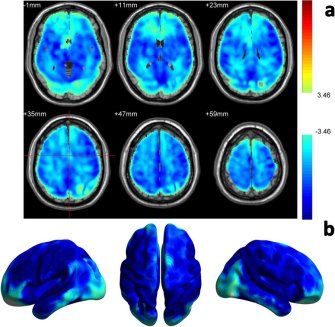 According to researchers, “caffeine caused BEN increase in a big portion of the cerebral cortex with the highest increase in lateral prefrontal cortex, the DMN, visual cortex, and motor network.”

“Caffeine-induced BEN increase varied across the brain with relatively larger BEN increase in prefrontal cortex, lateral striatum, visual cortex, and motor area. This distribution may be a result of caffeine effects on cognition: caffeine has the strongest impact on attention, vigilance, and action/motion function which are mainly subserved by the aforementioned brain regions.” 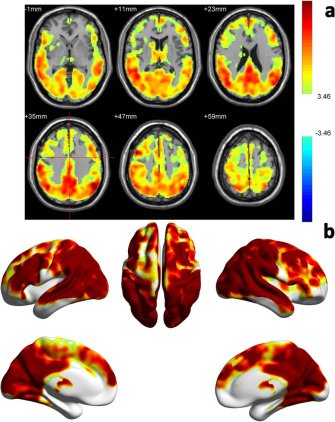 Because stimulation to brain regions is not vascular—overall blood flow to the brain decreases after caffeine is consumed—researchers conclude that caffeine’s stimulating effects are a result of greater neuronal activity. And despite what advocates for moderation have claimed for decades, there appear to be no negative side effects to caffeine consumption above average amounts.

A new study of over 700 human brains has shown a genetic “signature” for common psychiatric disorders.