Cosmonaut Anton Shkaplerov lit a wildfire recently when he announced his team had found alien bacteria clinging to the outside of the International Space Station (ISS). It took place during a spacewalk several years ago. Those samples were returned to Earth and have been analyzed recently by Roscosmos—the Russian space agency. He claims Roscosmos scientists conclude the bacteria isn’t from Earth. One thing is for sure, there’s living bacteria clinging to the outside of the ISS! Whether it’s extraterrestrial or not is another matter.

Shkaplerov in a recent interview with the Russian news agency TASS said that this bacteria was absent from the hull prior to launch. The cosmonaut is planning to lead a mission back to the ISS come December, which is why he was being interviewed. Since 2010, an experiment known as Test has been ongoing, where samples are periodically taken from the outer hull of the ISS and sent back to Earth for analysis.

“They (the bacteria) have come from outer space and settled along the external surface,” Shkaplerov claimed. “They are being studied so far and it seems that they pose no danger.” The robust bacteria gathers in areas where fuel waste accumulates and in little nooks and crannies around the ISS. Roscosmos meanwhile offered no details, and failed to respond to multiple media outlets for comment. 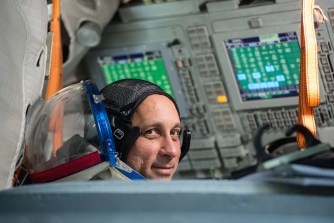 Details remain murky. Nothing has been submitted to any peer-reviewed journal. No one knows when or how the experiment was conducted. Most experts tend to believe that this bacteria somehow came from Earth and has made the outside of the ISS its home. Another question is how it’s able to withstand the harsh conditions there, including constant exposure to cosmic radiation, extreme temperatures, and ultraviolet light.

This isn’t the first incident of its kind. Back in 2014, another spacewalk sample was said to contain sea plankton living on the outside of the ISS, according to Russian scientists. No new information on them has been released since. Many scientists however, believe that it’s possible for bacteria from space to come to Earth.

There are already organisms on Earth which endure punishing conditions, such as bacteria who cling to hydrothermal vents on the ocean floor. Naked mole rats thrive in low oxygen environments. Tardigrades (water bears) have been found to survive the vacuum of space for short periods. And the ISS isn’t exactly in outer space, either. Rather, it’s situated within the thermosphere, 205 to 270 miles (329-434 km) above Earth’s surface. There is air there, thin as it may be. And microbes have been found as high as 47 miles (75km) above the ground. 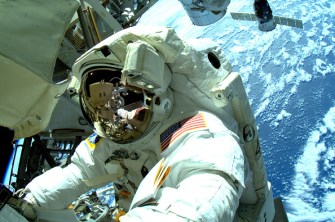 It isn’t impossible that bacteria from space settled on the ISS. But contamination brought from Earth is more likely. Credit: Getty Images.

Moreover, biological material has been found on meteorites and around comets. Streams of fast-moving space dust between planets could also bring microscopic alien life to Earth, or ferry microbes from Earth elsewhere. So it’s possible, but unlikely, that the Russian cosmonauts found alien bacteria.

What this incident does do is make us worry about the possibility of the space program contaminating other planets on future missions, farther afield. Of course, it’s impossible to completely avoid any contamination. Any time we set foot somewhere, microbes from Earth come with us.

Top 5 theories on the enigmatic monolith found in Utah desert

A strange object found in the desert has prompted worldwide speculation.
Hard Science

A mineral made in a Kamchatka volcano may hold the answer to cheaper batteries, find scientists.
Hard Science

A meteorite that smashed into a frozen lake in Michigan may explain the origins of life on Earth, finds study.
Up Next
Surprising Science

A New Hypothesis Suggests That Parallel Universes Might Interact after All

A new conception of quantum mechanics rests on the idea that parallel universes exist, and that they interact with our own to create weird and wonderful quantum phenomena.