An international team of researchers, led by scientists from University College London (ULC), made a startling new discovery that’s changing the way we look at the origins of life on Earth. Fossilized bacteria was found in rock features in northern Quebec, Canada, in an area known as the Nuvvuagittuq Supracrustal Belt (NSB). These rocks contained bacterial microfossils who stem to stern measured less than the width of a human hair. The fossils reside in layers of quartz among rock formations along the eastern shore of the Hudson Bay. The discovery never would have been made without the effects of climate change.

Our world was warm and wet at this time. The ocean had an average temperature of 140ºF (60ºC). Its bottom was pockmarked with hydrothermal vents, and it was among these that the earliest life, bacteria, sprung up. Their structures are very similar, nearly identical, to species still around today, clinging to undersea volcanic vents, according to Matthew Dodd.

He’s a biogeochemical PhD student at ULC and a researcher on this study. “Our discovery supports the idea that life emerged from hot, seafloor vents shortly after planet Earth formed,” he said. However, these findings could help prop up an opposing theory.

Within the quartz, Dodd and colleagues found microscopic fossils in miniscule tubes and filaments, encapsulated within a type of rock called hematite. This is iron oxide, more commonly known as rust. Its presence is accounted for through biological processes conducted by the bacteria. This species oxidizes iron for energy. Graphite, quartz, and other minerals were also identified, indicating biological breakdown. The bacteria would have flourished in this system of vents. It was an environment rich in iron. 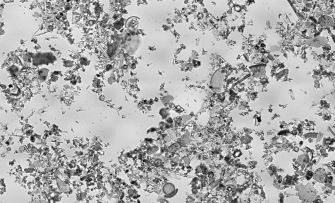 Similar findings in Norway, Western Australia, and the Great Lakes, are identical to these microfossils, adding evidence to their legitimacy, according to the study’s lead, Dr. Dominic Papineau. “The structures are composed of the minerals expected to form from putrefaction, and have been well documented throughout the geological record, from the beginning until today,” he said. “The fact we unearthed them from one of the oldest known rock formations, suggests we’ve found direct evidence of one of Earth’s oldest life forms.”

But not everyone agrees. Martin J. Van Kranendonk of the University of New South Wales, in Australia, told Science Daily, in an email, “I would say they are not fossils. Such formations may have been made through non-biological means.” High pressures and temperatures which form metamorphic rocks, might have also produce such structures, he argues. NASA geologist Abigail Allwood said that, although ULC researchers make a good case, “it’s an extraordinary claim to make and you do need extraordinary evidence.” She admits these could be microfossils. “I think the jury is still out a little bit,” she said.

Meanwhile, William Martin, who is the chief of the Molecular Evolution Institute at Dusseldorf’s Heinrich Heine University, also doubts the study’s claims. He told CNN, “There is no clear cut evidence that these were made by biology. It’s not good enough that these things look like cells.” The genetic information isn’t in yet. But that will likely clear up the debate.

Besides undersea, hydrothermal, vent-dwelling bacteria, the other prevailing theory of how life began on Earth is called panspermia. This suggests that an asteroid or a meteorite hit the surface of our planet carrying biological material and seeding it. The reason this makes sense is, the time when the bacteria would’ve lived was part of the “Late Heavy Bombardment,” when comets, meteors, and asteroids buffeted planets in the solar system, including Mars and Earth. So perhaps a meteorite carrying biological material from Mars landed on Earth, or even seeded one of these underwater vents. 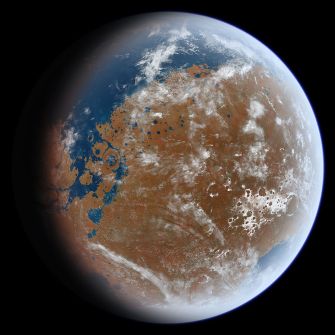 UK Astronomer Sir Martin Rees, thinks that life could have evolved on both Earth and Mars simultaneously. According to Dodd, “These discoveries demonstrate life developed on Earth at a time when Mars and Earth had liquid water at their surfaces, posing exciting questions for extra-terrestrial life.” The discovery, if it holds up, may also have implications for life elsewhere in the solar system. Dodd said, “The process to kick-start life may not need a significant length of time or special chemistry, but could actually be a relatively simple process to get started.”

According to Dr. Papineau, “This discovery helps us piece together the history of our planet and the remarkable life on it, and will help to identify traces of life elsewhere in the universe.” He says such organisms could have easily developed in similar chemical environments where water and volcanic activity are present. This might mean that Jupiter’s moon Europa or Saturn’s Titan—each of which are thought to have hydrothermal vents under frozen seas, harbor life, and that Mars once did. “If it happened very quickly here, it could have happened elsewhere in the solar system,” Papineau said.

Albert Einstein played a mean violin.
Up Next
Thinking

Albert Einstein’s Surprising Thoughts on the Meaning of Life

Albert Einstein shared his thoughts on the meaning of life and his own spiritual views.