Humans are so good at identifying faces that we see them in places where they do not exist, such as on the moon or Mars or in combinations of circles, line segments, and dots. It is a particularly useful skill for a social animal. Yet, how exactly we recognize faces and process them is not exactly known. For instance, the Thatcher effect shows that our brains do not simply accept sensory input when deciding what a normal face looks like.

Now, a new study published in the journal Cognition shows that what we think of a person influences our perception of their facial features. In other words, we think people with similar personality traits look the same.

The social aspect of facial recognition 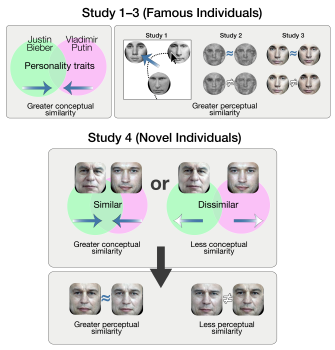 The initial study, carried out with the help of roughly 200 volunteers, had famous faces placed next to each other above a test picture of one of them. Volunteers had to then move their cursor from the test picture to the image of the same person as quickly as possible. Subjects then rated the likelihood that each famous person in the study had particular personality traits.

The final test sealed the deal. Participants were shown faces that none of them had ever seen before. Once again, they reported that faces looked similar if they were told the people shared similar personality traits and vice versa.

“Our findings show that the perception of facial identity is driven not only by facial features, such as the eyes and chin, but also distorted by the social knowledge we have learned about others, biasing it toward alternate identities despite the fact that those identities lack any physical resemblance.”

Pootie-Poot and the Bieb

This study adds to the evidence for a “social-conceptual” approach to facial recognition. According to the authors, these models suggest that our ideas of a person are difficult to separate from how we view their faces. As they explain in the introduction of their study:

“[A]ccording [to] these models, after presented with a face, the processing of visual features begins activating identity representations… and these in turn begin activating social-conceptual representations, such as personality traits (e.g., bold, diligent, competent).”

Other studies have shown that setting is also important to our ability to recognize faces. Why volunteers think that Justin Bieber and Vladimir Putin look alike remains a bit of a mystery.

To date, only one research vessel has ever encountered a milky sea.