Last week I overheard a conversation in which a woman was telling a man how she didn’t drink coffee. The virtues of a caffeine-free life were shared between the two, including the supposed toxicity of coffee and how being “natural” is a much healthier option. The two concluded their chat with self-satisfied grins, behavioral one-ups on the other 90 percent of the country that drinks the poisonous extract from those nasty beans.

And then there’s science.

A new study appearing in PLOS Biology, led by Judith Haendeler and Joachim Altschmied in Duesseldorf, Germany, shows that a physiologically-relevant dose of caffeine—in this case, what is achieved with four cups of coffee—protects cardiovascular cells from damage.

It has long been known that caffeine is associated with a reduced risk of type 2 diabetes, stroke, and heart disease. These researchers wanted to know why. According to their research, a mitochondrial protein, p27, protects heart muscles from cell death and helps repair these muscles after a heart attack. After the discovery, Haendeler said,

These results should lead to better strategies for protecting heart muscle from damage, including consideration of coffee consumption or caffeine as an additional dietary factor in the elderly population. Furthermore, enhancing mitochondrial p27 could serve as a potential therapeutic strategy not only in cardiovascular diseases but also in improving healthspan.

Altschmied notes that this research—along with an extensive list of over 100 studies showing the beneficial aspects of coffee consumption in helping decrease the risk of breast, colorectal, colon, endometrial, and prostate cancers, cardiovascular disease, Parkinson’s disease, type 2 diabetes, and mortality—overturns the assumption that the elderly should avoid caffeine. 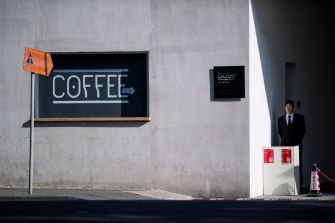 A security guard is seen next to a ‘coffee to go’ sign on the streets of Shanghai on April 17, 2018. (Photo by Johannes Eisele/AFP/Getty Images)

There’s also the NIH study of over 400,000 Americans, aged 50-71, showing that coffee consumption is related to a lower risk of all-cause mortality; another multinational study of over 500,000 Europeans confirmed this finding.

Of course, everyone processes caffeine differently. Some people can drink an espresso right before bed and have no problem sleeping. If I drink coffee anytime after noon, I know I’ll have a rough night. Coffee drinkers that are slow metabolizers are more susceptible to insomnia, heart palpitations, heartburn, and irritability. Caffeine has also been shown to have a negative impact on pregnancy and fertility. There are even examples of fatal overdoses. Then again, you can overdose on water.

As with such studies, coffee is not a cure-all. Haendeler notes that drinking four or five cups of coffee a day does not give anyone’s sedentary habits a pass. Regular exercise and good diet still matter.

But so does coffee. And that’s good news for us all.

Are we alone in the universe? New Drake equation suggests yes

A fresh take on the decades-old Drake equation incorporates new factors and greater uncertainty, suggesting a high likelihood that humanity is alone in the universe.