“Harry could tell Voldemort was standing right behind him. He felt a great overreaction. Harry tore his eyes from his head and threw them into the forest. Voldemort raised his eyebrows at Harry, who could not see anything at the moment.”

Thus transpires the confrontation between Harry Potter and He Who Must Not Be Named in a just-published new chapter, ‘The Handsome One’, from Harry Potter and the Portrait of What Looked Like a Large Pile of Ash. This new tome—of which only the one chapter so far exists—is so not from the mind of J.K. Rowling. It’s not quite from anyone’s, actually. It’s the result of an experiment by the Botnik organization, and it’s hilariously stupid. Naturally, it’s going viral.

Botnik describes itself as “a community of writers, artists and developers collaborating with machines to create strange new things.” Mission accomplished. Botnik’s core members include computer scientist Elle O’Brien, creative developer Joseph Parker, Jamie Brew, former head writer at Clickhole, and Bob Mankoff, who for years was the cartoons editor at The New Yorker, and as such was the main subject of the HBO documentary Very Semi-Serious. Anyone is welcome to join the Botnik community.

Brew has been playing with predictive keyboard creations for a while, with his Batman Loves Him a Criminal posted to Tumblr a while back. Others have created poetry with such apps.

The predictive algorithm in Botnik’s app is based on the language in the actual Harry Potter books. Botnik distributed the app to members for them to experiment with, and their favorite results were submitted for compilation as the insane Harry Potter chapter. 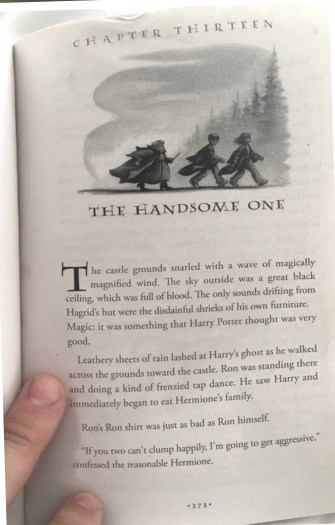 Everyone who reads ‘The Handsome One’ will have their favorite passages. Here are some of ours:

In any event, it looks like carbon-based authors and poets are safe from obsolescence for now. Not so much Voldemort, though, who is a “very bad and mean wizard,” according to The Handsome One’s best friend.

Read the full chapter over at Botnik.

Think of some of the greatest films of all time. Now try to remember the conversations that women have in them. Can’t remember? Don’t worry, they probably just obsess over men.
Neuropsych

Binge-watching TV together is good for your relationship, studies suggest

Surprisingly, this study was not funded by HBO, Netflix, Hulu or the Illuminati.
Politics & Current Affairs

Scientists Get One Step Closer to Developing an Invisibility Cloak

Scientists get one step closer to Harry Potter’s invisibility cloak by creating a material that can conceal objects, with far-reaching commercial applications.
Up Next
Technology & Innovation