When amateur radio operator Scott Tilley picked up a signal from NASA’s long-lost IMAGE weather satellite, he became the latest hero of the citizen science movement. He’s just one more science fan who devotes time and effort to his area of interest motivated strictly by enthusiasm. Though there’s no way to know how many such citizen astronomers and other scientists there are around the world, there’s no doubt that there are lots of them, not least because every now and then, one of them, like Tilley, makes an exciting discovery. Maybe you’re one of them. Or want to be.

Tilley’s in the habit of scanning the night skies of British Columbia every evening for several hours. The night he found IMAGE, he was trying to locate a particular USAF spy satellite. When he excitedly told his wife what he’d found, she just told him to tell NASA. Tilley tells the Washington Post, “By far, it’s the most important thing I’ve discovered. It’s a pretty cool thing in my world.”

Though amateur astronomers have been watching the heavens for centuries, their pace of discovery has certainly picked up recently:

All of these examples have to do with astronomy, and it’s certainly true that this area of science was one of the first to involve non-professionals back in 1999, with Berkeley’s SETI@home desktop app. “SETI” is short for “Search for Extraterrestrial Intelligence,” and simply by running the screensaver-like app, any computer user could help crunch the massive amounts of alien-hunting data from Mexico’s Arecibo telescope during idle time. The project is still ongoing. 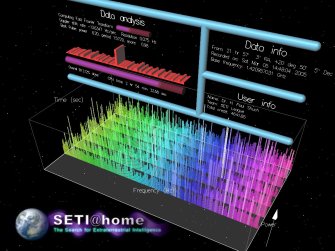 Other data-crunching projects soon followed, such as Stanford’s folding@home that uses participants’ CPUs to emulate the way proteins fold themselves in the human body.

Since those early days, scientists at universities, governmental agencies, and private companies have come to appreciate and rely on the ability of citizen scientists to act as large groups of observers — like the citizen astronomers above — contributors of massive data sets, and providers of computing time.

It’s safe to say that whatever field of science interests you, at this point there’s likely a project you can help with. There are lots of places where you can find projects in which to get involved:

This is such an exciting time to be an amateur scientist. Not only are new discoveries appearing all the time, but between the internet and our powerful computers and electronic devices, we’ve got access to research tools professionals of just a few decades ago could only dream of. There are so many ways to make real a contribution. Without even quitting your day job.

So, China has put a railgun on a warship. Should America be worried?

Pictures of the secretive and extremely high-powered weapon have appeared on Chinese social media.