Once hunted to near-extinction, humpback whales living in southern oceans near Antarctica are making a comeback.

Some quick facts about humpbacks:

However, that last fact is not likely to last; krill stock is being fished by some countries, and reduced sea ice actually endangers the crustaceans.

Some other species rebounding, though not as quickly as the humpback, are fin whales, blue whales, and the southern right whale. 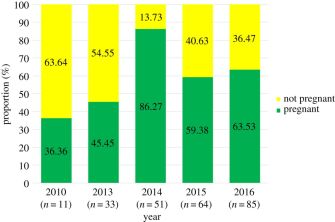 Graph: Inter-annual variation in the proportion of assigned pregnant and not pregnant (pregnancy rate) female humpback whales sampled along the Western Antarctic Peninsula based on progesterone concentrations. The overall mean pregnancy rate across all years was 63.5%.

From the published study:

“Our research demonstrates that this feeding aggregation of humpbacks exhibits high pregnancy rates and a high proportion of females that are simultaneously pregnant and lactating. Both of these findings are consistent with a rapidly growing population.”

When will we see the first VR blockbuster movie?

Ready Player One’s spectacular VR OASIS experience has us wondering how achievable it really is and when we’ll start seeing immersive VR movies.