Carl Sagan was what every science nerd aspires to be. He was an astronomer, astrobiologist, physicist, cosmologist, author, educator, sometimes philosopher, and advocate of human space travel. He was consulted in both the writing of 2001: A Space Odysseyand the playlist for the Voyager Golden Records.

His influence on science education is nearly unmatched. In addition to writing several popular books, he was seen by half a billion people as the host of the original TV show Cosmos. His students Bill Nye and Neil deGrasse Tyson carry on his work to this day.

What made Carl Sagan’s work in science communication so amazing was his ability to relate big ideas to our daily lives. He could show us how we fit into the grand scheme of things without the need for difficult equations or esoteric philosophy. He could make the grandeur of the cosmos relevant to a person in a living room.

He does this best in his famous reflection on the Pale Blue Dot, a photograph he suggested NASA take of the Earth with the Voyager 1 spacecraft as it left the solar system—one of the first ever ‘portraits’ of the solar system. Many of you will recognize it. 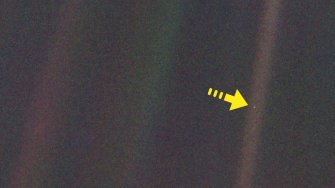 We are located about halfway down in the brown stripe on the right on that lightly colored speck. Take a moment to consider this. (NASA / JPL)

An equal amount may be familiar with Sagan’s short speech on this picture, where he muses on our place in the universe as illustrated by this striking image. While the version of the speech that most of us have heard is accompanied by swelling classical music, a video on Vimeo plays the raw audio and allows us to focus on Sagan’s voice, making these words much more intimate, personal, and compelling. If you want to listen, start just before the 12-minute mark.

If you would like to read the transcript while you listen, we’ve got it right here:

Look again at that dot. That’s here. That’s home. That’s us. On it everyone you love, everyone you know, everyone you ever heard of, every human being who ever was, lived out their lives. The aggregate of our joy and suffering, thousands of confident religions, ideologies, and economic doctrines, every hunter and forager, every hero and coward, every creator and destroyer of civilization, every king and peasant, every young couple in love, every mother and father, hopeful child, inventor and explorer, every teacher of morals, every corrupt politician, every “superstar,” every “supreme leader,” every saint and sinner in the history of our species lived there–on a mote of dust suspended in a sunbeam.
The Earth is a very small stage in a vast cosmic arena. Think of the rivers of blood spilled by all those generals and emperors so that, in glory and triumph, they could become the momentary masters of a fraction of a dot. Think of the endless cruelties visited by the inhabitants of one corner of this pixel on the scarcely distinguishable inhabitants of some other corner, how frequent their misunderstandings, how eager they are to kill one another, how fervent their hatreds.
Our posturings, our imagined self-importance, the delusion that we have some privileged position in the Universe, are challenged by this point of pale light. Our planet is a lonely speck in the great enveloping cosmic dark. In our obscurity, in all this vastness, there is no hint that help will come from elsewhere to save us from ourselves.
The Earth is the only world known so far to harbor life. There is nowhere else, at least in the near future, to which our species could migrate. Visit, yes. Settle, not yet. Like it or not, for the moment the Earth is where we make our stand.
It has been said that astronomy is a humbling and character-building experience. There is perhaps no better demonstration of the folly of human conceits than this distant image of our tiny world. To me, it underscores our responsibility to deal more kindly with one another, and to preserve and cherish the pale blue dot, the only home we’ve ever known.

Why does this speech matter?

This speech makes our cosmic insignificance clear. All we have done is on a “mote of dust.” However, Sagan reminds us of all that makes our lives worthwhile as well: our triumphs and tragedies, our hopes, and our potential for greatness. Just because we are nothing to the cosmos doesn’t mean that we are nothing.

Astronaut Edgar Mitchell once suggested that the world would be a better place if all the politicians could be brought into space and made to look at the Earth. This image and Sagan’s speech are the closest we can currently get to that perspective-changing experience. To consider your entire life as taking place on half of a pixel is sobering.

In a world where we are increasingly polarized, distrustful, and wary of one another, Sagan’s speech reminds us that we are all in this together. When looking back at Earth from the vast cosmic void, our petty differences vanish. He manages to tie the magnificence of space to the simple problem of getting along with one another and succeeds in a way that nobody else could.

More than ever, we need the perspective offered by the Voyager spacecraft and the explanation of what we’re looking at given by Carl Sagan. While the loss of our importance is often disheartening, the knowledge of our true place in the universe is enlightening.

Meaningful pictures are assembled from meaningless noise.
Up Next
Technology & Innovation

If your home’s energy footprint bugs you, do something about it